They're the must have motorcycle but why are cafe racers so popular? Here's 5 reasons I believe the motorcycling world is hooked on cafe

Most have heard the term “Cafe Racer” and in our head we have an image of what one looks like. In my particular case, they are my favourite style of motorcycle. Here I look at a few of the reasons for their resurgence.

Why are Cafe Racers so popular?

The Cafe Racer dates back to the 1950’s and early 60’s of England, Money was sparse but the desire for speed among young men was high. Purchasing a second hand Norton or Triumph and stripping it of everything but the essentials was the only way to get the adrenaline rush you craved.

Done right and you would be left with a very light motorcycle that could make more use of the horsepower underneath it.

Having such little weight meant wheelies were far too easy if you wanted a fast start. So, to fight this, you needed to put your body weight on the front end of the machine, hence the turned down handlebars.

All these bikers did was turn the handlebars upside down and this gave the owner a lower riding position, with more wait on the front.

Being faster off the mark brought it’s own problems though. The bench seats of the day meant you slipped down the seat once you approached higher speeds. That gave birth to the small hump you see at the back of seats and later on the cowl for a better aerodynamic shape.

These young motorcyclists used to hang out at the Ace Cafe in London situated on the North Circular. Back then it was a Truckers Cafe but because it was one of the few places open during the night it became popular with Cafe Racers.

Legend has it that the term Cafe Racer was actually coined by an angry trucker. During an altercation he was heard to say to some bikers “you aren’t real racers, you are just cafe racers” and the term stuck.

It is possible that one of the reasons Cafe Racers are popular is because of the image today’s society have of the 50’s and early 60’s. Back when things were groovy and different. Back when the world was finally putting itself together from the war and separating itself from the generation that came before.

REASON #2 – YOU CAN BUILD YOUR OWN

Cafe racers are incredibly easy to build if you have the time, some basic skills or willingness to learn. Parts are easy to come by and you can also buy kits so you can turn almost any motorcycle into a Cafe Racer. It doesn’t matter if you have an old bike you want to renovate or you have a brand new ride, chances are there is someone selling parts to help you to convert it to a Cafe Racer.

Everything starts with stripping down the motorcycle, to get it down to its bare minimum. That is the essence of the Cafe Racer, you just want the essentials. Once you have the bike down to that stage, you can start selling the unwanted parts to pay for the new parts you will need. If you plan to go this route you need to read ‘How much does it cost to build a cafe racer?‘

There are several reasons why retro is booming today. One could be because looking back we appreciate the small imperfections of something more. A custom-built cafe racer was never expected to be perfect, and it isn’t today either. A custom built (either professionally or DIY) Cafe Racer will have it’s own little quirks, which make it unique.

Even most modern production Cafe Racers of the day allow for plenty of customisation so it can be made unique.

When Cafe Racers were born in the 1950’s, they were fun, light and fast. They generally still are today. Fashion or trends have not affected the styling since the heyday of Cafe Racers of the 60’s. That is one of the big reasons to why they are so popular today.

A Cafe Racer is  ideal for those that want a motorcycle to ride for leisure on a Sunday afternoon or to park outside the coffee shop and admire.

Because of the sitting position you will find your weight is on your wrists. Cafe Racers also feel cramped at the best of times so they aren’t really suitable for long rides. If you are on the big side you will want to read ‘Which Cafe Racer is best for a big guy?‘

They would also make a decent commuter motorcycle for around town due to their light handling.

REASON #5 – YOU CAN PURCHASE A PRODUCTION CAFE RACER

If you don’t have the skills or the time to build your own cafe racer, you can now buy one straight from the showroom. This is a big reason why cafe racers are so popular, because now everyone who wants one can have one.

There is an argument to be made that a production bike loses some of the qualities we have spoken about above, such as uniqueness and quirks. However the trade off is that you are getting a Cafe Racer without the effort, with the guarantee that everything will work but with the same amazing style and looks.

Thanks to the popularity of Cafe Racers, some of the older manufacturers are reappearing on the scene. Brands such as Norton and Royal Enfield are relevant again. While brands such as Triumph, BMW and Ducati are going back to their origins, improving what they already had, and creating one heck of a bike!

Back in the 1970’s Norton was a power house and the Commando was its most popular motorcycle. Norton Motorcycles has seen its fair share of ups and downs, even ceasing production altogether.

In 2008 it was able to begin manufacturing again. The 961 Cafe Racer is a dressed up Commando. Boasting 78 bhp from a parallel twin 961cc engine while showing the brands heritage in Cafe Racers. The bike features clip on handlebars and set-back footrests and a stunning silver and black colour scheme. It also has high performance parts such as Brembo breaks and adjustable suspensions from Ohlins (both front and rear are adjustable). It’s finished off with bespoke stainless steel exhaust system, giving the bike the voice of a mechanical angel.

Triumph is another brand with cafe racer heritage and history. Their new Bonneville range has taken the world by storm, and it isn’t hard to see why. The Street Cup is a pure Cafe Racer from the moment you look at it to the moment you get off it. The 900cc twin produces 54bhp and will reach speeds that will definitely get the adrenaline pumping.

It’s A2 compliant too and once your 2 years is up you can take it to your dealer and have it de-restricted.

The Street Cup as less capacity that the T120 Bonneville and the clip-on handlebars may not be as comfortable as the Street Twin, but none of those things matter the moment you first lay eyes on it. The Street Cup was Ancient Hippy’s top recommendation as best Cafe Racer for a beginner. 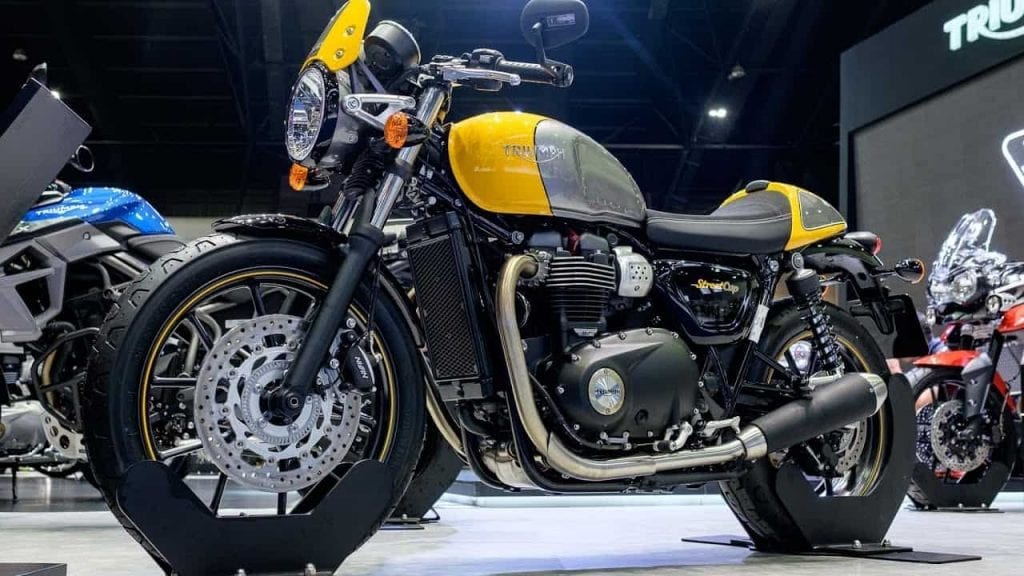 Now, don’t be confused by the name. The Scrambler is only by name, not by nature, meaning it is fully designed to be a cafe racer. The current model boasts a 803cc engine that packs a 75bhp punch, and whilst the name is confusing and the styling choices a bit odd, the bike is true to the cafe racer beliefs. Ducati know a thing or two about making stunning bikes that perform well, and this is no exception. 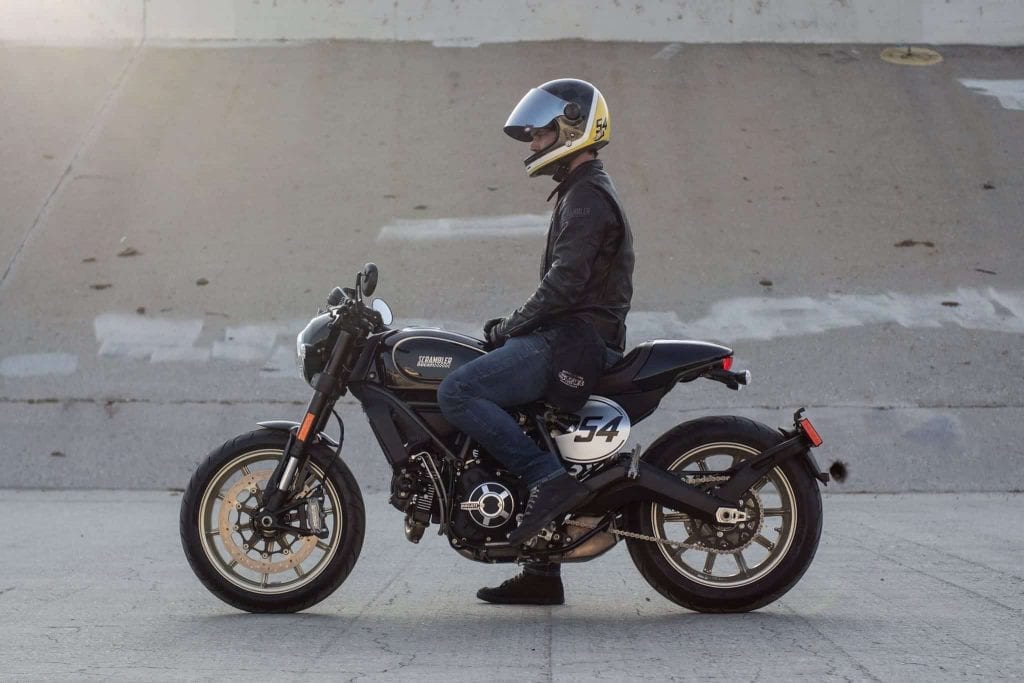 This is my personal favourite. But let’s get the bad bits out of the way first. It is a downgraded version of the R9T, with less power and slightly worse suspension and, yes, it isn’t very comfortable for long rides. But, and this but is very big, who is going to ride a cafe racer long distance?

Now, you will see how the benefits much outweigh those minor bad bits. It is stunning, an absolutely beautiful bike to look at, that can’t be denied. It boasts a BMW Boxer Twin 1170cc engine, something we all know works and works well. The minor spec reductions aren’t that noticeable for most riders and it reduces the cost of the bike. So, for a beautiful Cafe Racer off the shelf, it has everything you  could want and more.

To my mind the Triumph Thruxton R is the best performing production Cafe Racer available. This is the new limited edition version, the Thruxton TFC. Only 750 will be made and each have a plaque displaying which of the 750 it is.

Triumph have been at the forefront of the Retro motorcycle scene. Without even knowing it, Triumph kept the old school looks alive until they became fashionable again.

The 3 Thruxton 1200cc models available are all stunning and all ooze the traditional Cafe Racer looks. If you are seriously considering purchasing a production Cafe Racer then go test ride a Thruxton. By second gear you will be a hooked hooligan. 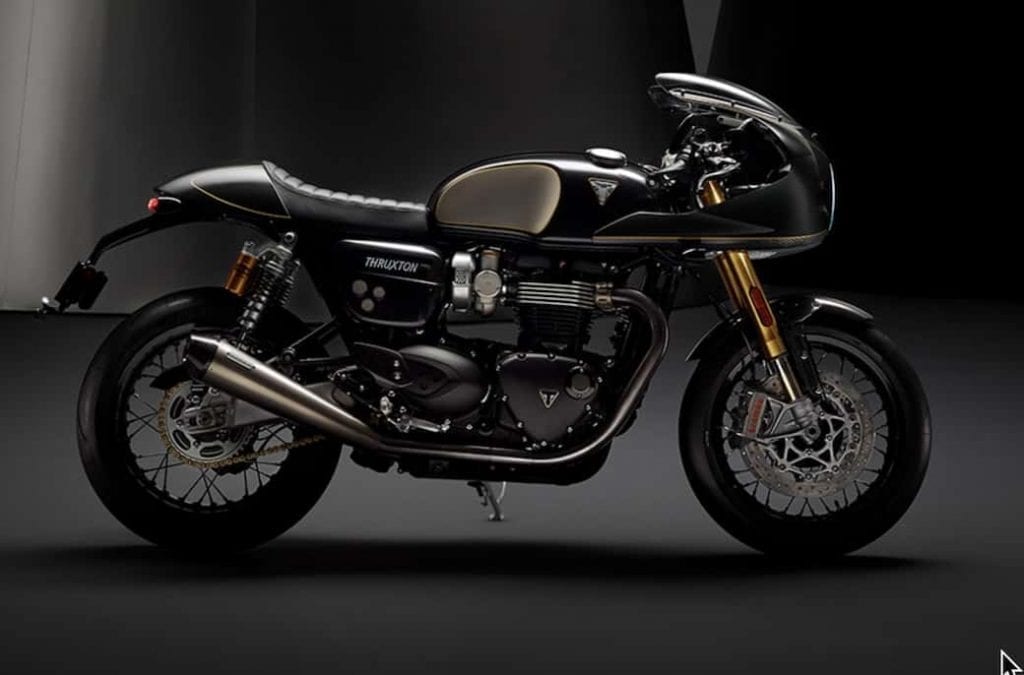 What makes this bike special is this: This is the first parallel twin Royal Enfield have produced since 1970. That alone makes you forget that 47bhp isn’t anything too exciting or that it is only a 650cc twin. Because owning one makes you feel special. It makes you part of a long history of motorcycles that is sewn into British history.

Royal Enfield has over 100 years of history, making its first motorcycle in 1901 and was once the choice of both military and police. Obviously, the Continental GT has some of the modern touches such a slip assist clutch and ABS, but you get much more than that. You get to be a part of something historical by owning one.

These are cracking value for money at around £5700 brand new. It is by far the most popular Cafe Racer is India where they are built. Don’t let that put you off though. Each exported bike gets over 1000 manual checks before it is shipped.

The Royal Enfield Continental GT650 is restricted to 47bhp so that it can be ridden in the EU on a A2 licence. 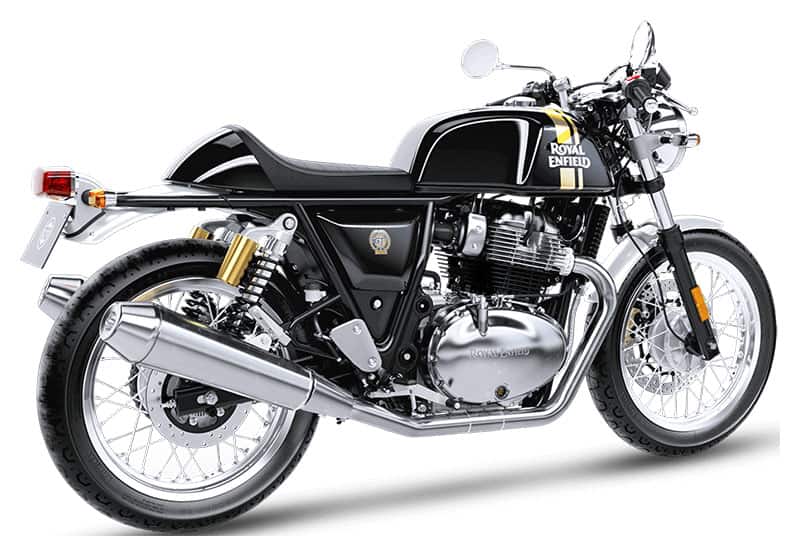 So why are cafe racers popular? Simply put, because they are fun, stylish and pretty darn awesome.

Simon is a big cafe racer fan. He also owns a Harley. "I can get on with most styles including naked and supersports but I always end up going back to the old school motorcycles." 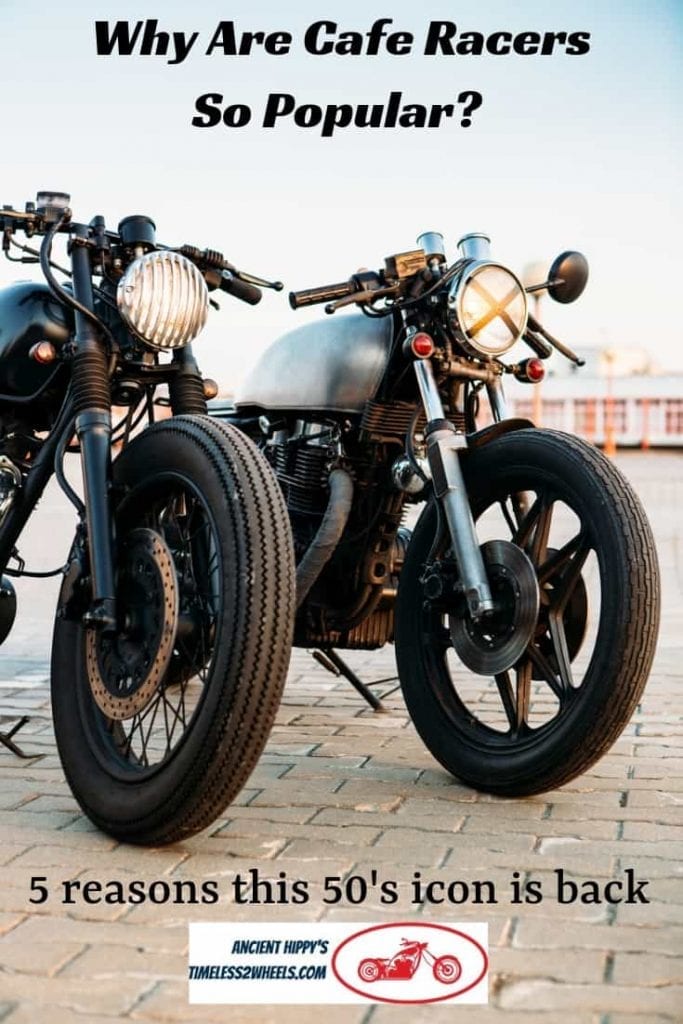