Ever wondered what it is that makes a Bobber unique from other motorcycles? In this article you’re going to discover what makes a Bobber bike worthy of the title, their origins and attributes and a look at todays modern interpretation of the classic Bobber looks.

What is a Bobber motorcycle? A Bobber is a motorcycle that has been stripped of all none essentials such as the front fender and other none essentials. It is then given a shortened rear fender (bobbed), a muted basic paint scheme and a lowered stance.

Bobbers are not without exceptions however, and they have a long history so you will want to read on to explore the uniqueness of the Bobber a little further.

Bobber bikes were originally created by owners customising their own motorcycles, initially for performance purposes. This has changed over time but the following is a list of attributes that make a Bobber unique and a bike defined as such:

So, now you have the physical aspects of what makes a Bobber unique, but like me you may be wondering when did all this start?

Well, I did some digging and discovered the roots of the Bobber go back to the 1920’s.

When did Bobbers first appear?

Bobbers first came on the seen in the 1920’s with the release of Harley Davidson’s ‘J’ Series V-Twin. Owners began to favour a lowered down bike so began using small diameter wheels, cutting down the frame and creating a shorter rear section.

It wasn’t long before this caught on and the ‘California Cut-Down’ phase was started. Owners had bikes that stylistically looked better but also performed better than the stock bikes being manufactured at the time.

In the 1930’s Harley and Indian produced bikes following the ‘Cut-Down’ trend. Following on racers began taking excess weight off their bikes to increase performance starting with the front fender and creating a ‘bob-tail’ rear fender. The ‘bob-job was born.’

This continued to be the base of the custom scene for a long time. Lee Marvin the nemesis of Marlon Brando in ‘The Wild One’ can be seen riding a Bobber style Harley Panhead; if nothing else the movie really gives a wonderful insight into the bike scene in the 1950’s and the evolution of the original Bobber.

It wasn’t long before manufacturers were presenting their customers with accessories to suit the style and it became substantially easier for riders to ‘bob-job’ their bikes. Production bikes from Harley, Indian and Triumph were already lending themselves to the style; which meant frames no longer needed modifying.

However, Bobbers were about to evolve that little bit further into a new phase altogether.

While modifications on stock bikes to increase performance prompted the birth of the Bobber, style was becoming slowly more relevant. People were chopping down their frames even further, increasing wheelbases and length of their forks, applying fresh paint schemes that sought attention.

Choppers were on the horizon and then catapulted to popularity by the 1969 release of ‘Easy Rider’. Style took priority over performance and therefore, Bobbers took a back seat for a while.

What’s the Difference Between a Bobber and a Chopper?

The fundamental difference between a Chopper and Bobber is that generally a Chopper has a completely custom frame or an extremely modified stock frame. The Chopper is the extreme version of the original bobber and will often sacrifice performance details like handling to achieve their look.

Return of the Bobber

The 2000’s started to see the Bobber custom scene creep back, sliding right into place with the later retro scene explosion. Triumph saw a resurgence after bringing back the Bonneville in 2001 which gave an ideal platform for customisation.

Slowly bikes were put into production that were released as Bobbers (which caused some controversy as to what the actual definition of a Bobber is; as it all began with riders doing their own customisation rather than the manufacturer). However, the style won over many riders who saw these bikes as homage to the old school Bobber.

In 2006 Harley released the Street Bob which slid right into the Bobber niche. More recently and evidence that Bobbers are still revered by bikers was the 2017 release of the Indian Scout Bobber and the Triumph Bobber. I look at these a little later on in some depth.

What are the benefits of a Bobber?

A look at some examples of Modern Bobbers:

Fancy the Bobber style without having to do the work yourself? There are plenty of Bobbers in production to choose from but here’s a look at 2 of my favourites.

At the heart of this beast is the Milwaukee-Eight 114, 84 horsepower, V-Twin Engine.

The bike is a softail with an adjustable rear-mono shock suspension, this allows Harley to preserve it’s coveted hard-tail look – which fits in with the Bobber style as does the ‘bobbed’ rear fender.

The riding position is stretched out, helped in part by the stock Ape bars.

It comes blacked out except for the 4 paint schemes that Harley offers for the tank and fenders:

Although the Street Bob comes standard ready for 2-up riding, the black seat and pillion pad are very subtle and stick within the remit of keeping the low-down riding position. The riders saddle sits in line with the engine so, the all-important line from steering head to rear axle so typical of a Bobber remains intact. It is a very reminiscent model of the 1950’s Bobbers.

The Indian Scout Bobber was released in 2017 after the success Indian had with the release in 2014 of the Scout.

The Bobber Sixty is aimed at new riders and has a slightly smaller engine a liquid cooled, 1000cc, 76-horsepower V Twin.

The Bobber Twenty is the closest to an original Bobber style.

It comes with a floating solo seat and mini apes which highlights the traditional stance. The colours are also muted (but still very classy) in ‘Sagebrush Smoke’ and ‘Thunder Black Smoke’. The classic Indian Headdress logo on the tank is the final stamp that throws observers straight back into Indian Motorcycle history.

Both Modern Bobbers are great machines and fit right into the niche they were built for. I think they pay respect to old school Bobbers beautifully and given they are both founding manufacturers which riders used to create the Bobber style; modern riders can’t go wrong with either to get true Bobber authenticity, without the need of tools!

What makes the Bobber unique to me is that it all started 100 years ago with one of the oldest motorcycle companies – Harley Davidson. The style created by home-builders in the 1920’s has stood the test of time, never disappearing altogether and inspiring many of the custom scenes to date.

The traditional low-down aggressive stance, no accessories and minimalistic base lend itself to the purity of riding, just the open road and your 2 wheels.

Ready to find your stock bike to do a ‘bob-job’ on? 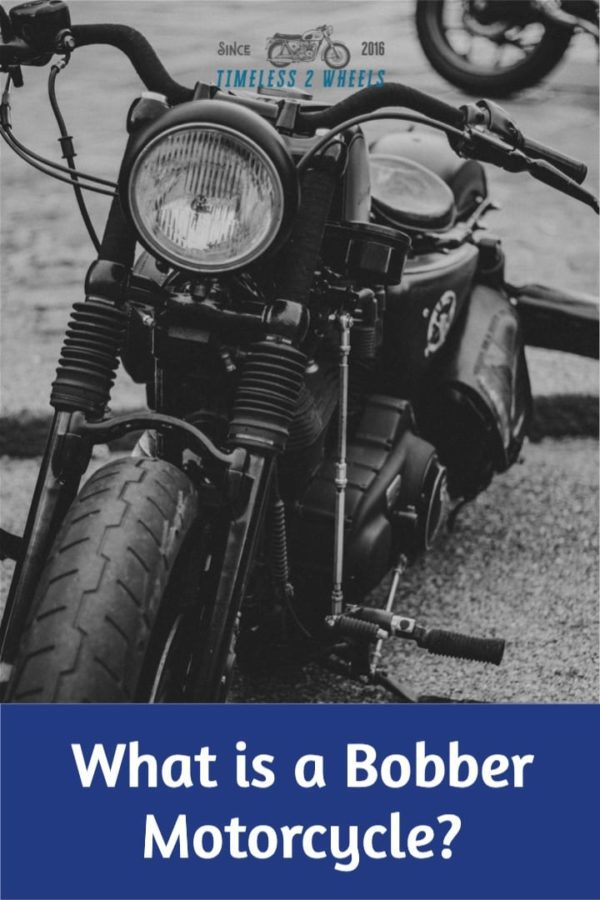