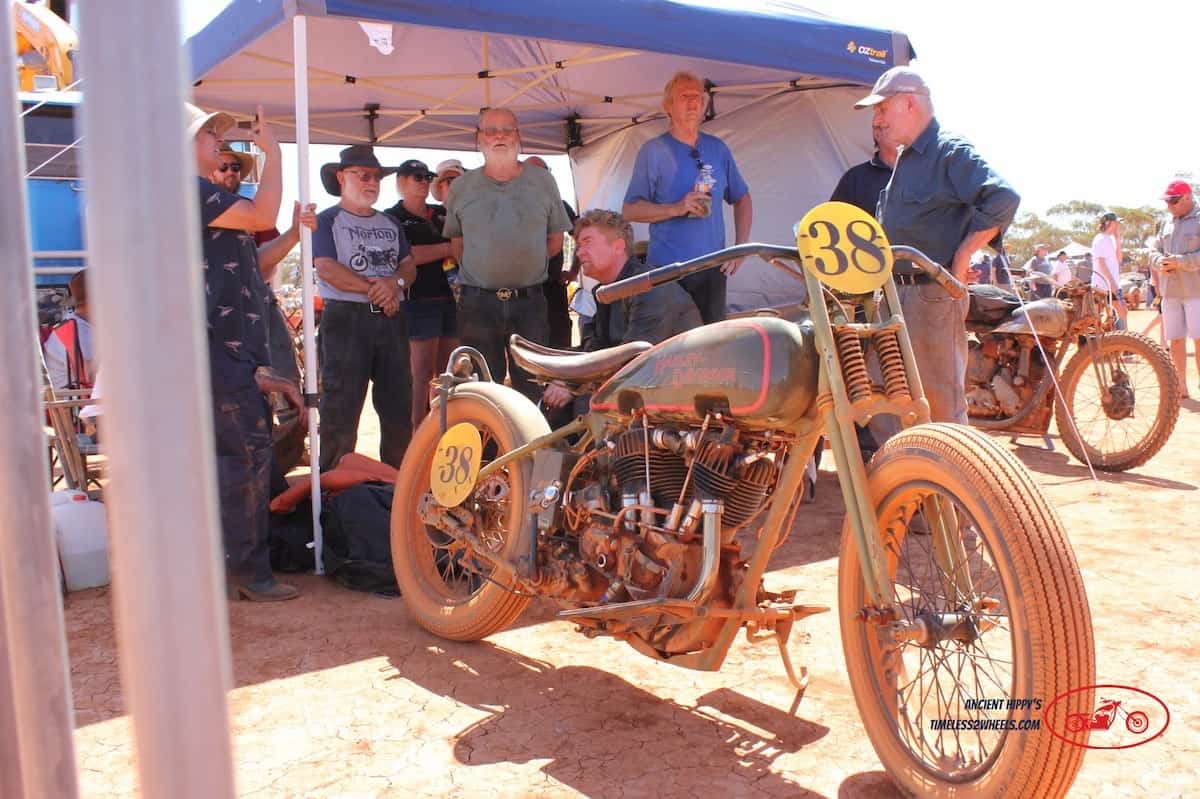 Standing in the vast, open-plain, dry lake bed in the Australian Outback is a world away from where I had been just 10 days earlier. The red dust of the Eastern Goldfields of Western Australia is familiar territory to me but, on the other side of the world, the Isle of Man is fast becoming my favourite home away from home.

The lush, tree-lined streets, anywhere else in the world would be considered quaint, but on the Isle of Man they are steeped in history. I feel like I’m in a magical place whenever I visit and it’s becoming increasingly more difficult to pull myself away from the Isle, even after the racing has ceased.

But, before I know it we’re plucked from the island Dues ex-Machina, landing back in Australia with a thud and creeping post-holiday blues. But this year there was an antidote.

Within days of arriving home, I had my 1914 Model T Roadster loaded onto a trailer and bound for Kalgoorlie. It’s a long tow from our home on the coast into the red interior of the Eastern Goldfields where we traded the fresh sea air of the Isle of Man for the baked red earth of Lake Perkolilli.

Don’t be misled by the name, Lake Perkolilli is as dry as a bone, it rarely sees rain and when it does the precious liquid is dried up almost as quickly as it hits the ground.

Lake Perkolilli is the traditional name for the ground on which some enterprising souls in 1914 decided to create a 4.25KMs oval race track. It was in fact Western Australia’s first motor-racing circuit.

The track was originally created for motorcycle racing but it wasn’t long before the four-wheel fraternity wanted in and car racing was introduced. The circuit is bordered by low, salt-bush and mallee scrub, which would inconvenience, more than damage any errant racing car or motorcycle that might spear off course.

There are no sealed roads, no electricity and no amenities. Everything is trucked in for the four days of the Red Dust Revival and a pop-up town of some 5,000 people appears.

Red Dust Racers is the re-created tribute to the racers of the past. Limited to pre-1940 cars and motorcycles, I was most put out when they wouldn’t let me race my 1956 Triumph Triton because it was too modern. Do the math. 1956 was 63 years ago!

Bemoaning my misfortune on social media, a friend chimed in saying, “That’s because when you saw how dirty your bike would get, you’d flood the lake with your tears.”

The lake has indeed been flooded, the last time being 2014 when the first Red Dust Revival was staged which brought a premature end to the event. It’s taken the organisers five years to lick their wounds and host another event because, even though it never rains in the desert, that one in 100 year flood could come along and cause the event to be cancelled again this year like it was in 2014. I’m happy to report it wasn’t.

In the months and weeks leading up to this year’s event friends and acquaintances burned the midnight oil in sheds dotted around Australia preparing specials to run around the Perkolilli circuit.

The thought had even crossed my mind but with a trip to Scotland, Iceland and the Isle of Man, my 2019 dance-card was full. It was going to be all I could do to get my Model T out there in any sort of serviceable condition. But we did. We trailered it to Kalgoorlie, which was to be our base for the four days of Perko, driving out to and returning from the lake each day.

Rolling out of Kalgoorlie in our Roadster was a special treat. We love Kalgoorlie. My wife and I have spent several years living in red-earth, corrugated-iron town and always enjoy going back for a visit.

For Perko 2019 there was no hint of rain, the sky was bright blue for as far as the eye could see and, at around 9.00 am, the sun still didn’t have too much of a bite, which was just as well as we had left the soft-top from our car at home.

Driving a Model T is a special experience. Once she is in second-gear (aka top-gear), the advance is set, likewise the accelerator, both of which are on the steering column, there is very little else to do except sit and steer the car. The big, long-stroking 3 litre engine ticks over with a reliability of cars less than half its age.

We sit, chat and marvel at the passing landscape. A steady stream of spectator cars and bikes passed us as we trundled along in the T. Travelling so slow, and being out in the open, we could even hear the hoots and hollers of the motorcycle riders as they passed by.

I was there in 2014 with my 1914 Model T Ford Roadster and we were there again this year with the same car, now at 105 years of age. My T is not a race car, we intended adding to the event simply as a spectator car, similar to those that lined the circuit back in 1914 when our Model T was born.

Similarly, this year, as in the past, vintage aircraft, bicycles and clothing adding to the authenticity of the event. My wife wore her finest Victorian outfit whereas I packed only my fresh-off-the-rack, IoM TT tee-shirts.

In hindsight I felt like a bit of a dick for not getting into the spirit of the event, but I had my hands full with other things. Like getting our veteran car out from Kalgoorlie and return on each day of the event.

Lake Perkolilli is 40 kilometres from Kalgoorlie. It’s hot, dry and dusty. 10 days earlier, I had been in a little-shoe box of a car, crawling over Mount Snaefell at 30 miles per hour, barely able to make out the road ahead of us through the fog.

Fast forward to the Red Dust Revival and we’re again reduced to 30 miles per hour. Not because of mountains or fog, simply because under the conditions we were trundling along in that’s the top speed of our car before the thermosiphon cooling system protests with water bubbling out from under the radiator cap. Turns out we were using more water to get to Perkolilli than petrol.

Another stark dichotomy between the Isle of Man and Lake Perkolilli is the speed at which the racers are travelling. At the Isle of Man TT, motorcycles fly by at 200 miles per hour. At Perko they barely make 50 mph, but they certainly look like they’re going all out.

It should be said however, the motorcyclists at Perko feel like they are going at 200, particularly when they crash. Old bikes and old bodies were thrashed and trashed. Engines were blown to pieces and arthritis revisited crusty old racers who creaked about in crusty old leathers.

Like the machines, the riders at Perk are aging and the bodies are not as sturdy as they once were. Some big tumbles resulted in serious but not life-threatening injuries for a least two of the riders, one of whom was flown to Perth for treatment.

Similarly to the Isle of Man, racing is dependant upon the presence of a well-equipped medical team. Injured riders were transferred by Ambulance to Kalgoorlie from where they were flown to Perth, the capital city of Western Australia, some 600 kilometres to the West. Racing is suspended whilst the Ambulance makes the 80 kilometre round trip and then, upon its return, racing is back on.

At the start of the event, the Perko earth is packed down like red bitumen. It’s hard and unforgiving. But, little by little, the top layer is brushed off every time a vehicle passes over it. The fine red dust rises off the tyres of the racing cars and bikes like red smoke and hangs in the air, not quite settling between laps.

Along with the cars whipping up the dust, all-to-frequent willy-willies blow across the desert every half hour or so, like mini tornadoes the strong ones rip up tents, signs and small children in their path. When it finally does settle, the red dust has the same consistency as talcum powder and gathers in holes and furrows that will swallow up the wheels of small cars and motorcycles. In Australia it is colloquially known as bulldust!

Out on the clay, riders and drivers enjoyed some spirited racing in almost perfect conditions. It was perhaps a bit warm but the races only lasted a few minutes then it was back to the pits for both motorcycle and rider to cool off. Some of the more unfortunate riders didn’t quite make back to the start, in which case they remained trackside until the Sad-wagon attended and loaded the machine up.

Although many bikes succumbed to the God’s of Speed, it was by no means a drive of shame. In most cases the machines were repaired and made ready for another go at the lake.

Former Australian motorcycle road-racing champion, Brian Cartwright, now in his seventies, proved he hasn’t lost any of his racer’s edge. Brian was willing to semi-sacrifice his 1953 Vincent motorcycle and sidecar to the sands of Perko.

About now, those that have been paying attention will be saying ‘hang on, that’s ten years outside the cut off.” Indeed it is but I’m guessing the organisers were prepared to bend the rules to allow Brian to take his very valuable machine out onto the lake.

Aided and abetted by his wife Christine, who rode in the boat, Brian was able to give the Vincent Rapide a good run at the lake and became the overall motorcycle champion. After seeing Brian’s precious machine change from black to red I had to agree with my friend’s observation about my capacity to cope with a dirty machine.

Aside from Brian’s Vincent, there were a few other very valuable vehicles running around Perkolilli, including a Bentley, a Rolls-Royce and a LaGonda – which was flown in from the UK and managed at least one lap before the crankshaft made its presence known through the side of the engine block.

But, aside from the expensive and valuable cars, the beauty of the Perk is the inventiveness it engenders. Machinery that was once left to languish in sheds and paddocks has been given a new lease on life. Taken in, stripped, rebuilt and re-created.

I grew envious of my friends that would be racing their motorcycles on the lake. Back in my twenties I used to ride desert races out in the Goldfields and I relished the idea of revisiting those days, even if it was at very much reduced speeds and on an ancient motorcycle, ah, maybe next year.

A visit to the amazing Red Duster Racers in Lake Perkolilli, Western Australia 2019

Dan is a vintage motorcycle fan based in Australia. He boasts a collection that includes Triumph and Norton classics as well as his latest pride and joy, a Vincent Rapide 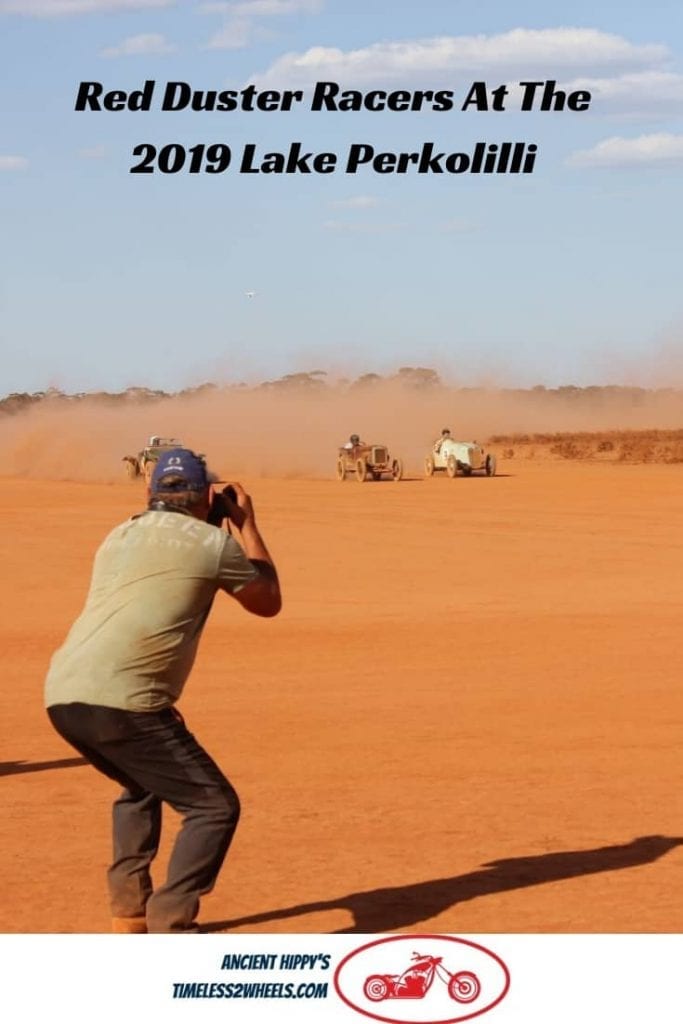