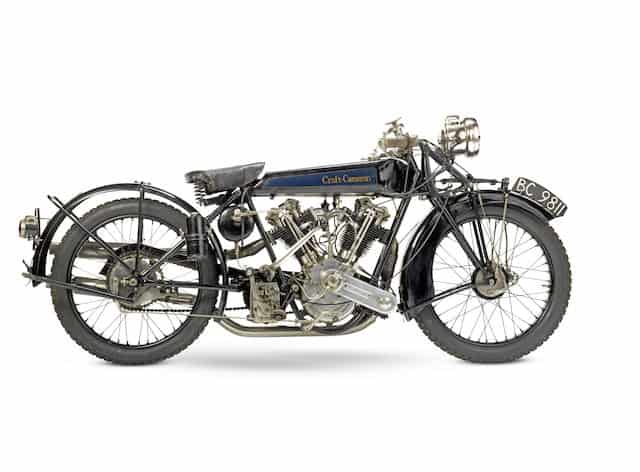 This extremely rare 1924 Croft-Cameron 996cc Super Eight has just sold at Bonham’s auction for an amazing £203,100. It is understood that the motorcycle will now be leaving the shores of Britain for the first time in its life.

This rare survivor of a long-forgotten British make was purchased new from a Leicester showroom in 1924 by a Mr Bert Henson, railway locomotive driver.

Supplied in solo trim, the machine was attached to a sidecar in the 1930s. Mr Henson, who lived at 3 Sheffield Street, Leicester, moved to Feltwell in 1952 and shortly thereafter to Thetford. The Croft Cameron was a regular sight on Thetford’s streets during the mid-1950s, still attached to the sidecar.

By 1956, the Croft-Cameron had been taken off the road and stored in Burrell’s old traction engine works in St Nicholas Street, Thetford. It was there that the machine was discovered and purchased in 1957 by the current vendor’s father.

The machine was restored in 1962 (the modifications made to the lubrication system and exhaust were already present). Following its restoration, the Croft Cameron was a regular entrant in VMCC events such as the Banbury Run and Tour of Birmingham

throughout the 1960s, and was displayed at the Motor Cycle Show in London.

It also features in Damien Kimberley’s book, ‘Coventry’s Motorcycle Heritage’ (page 38). The machine was last run approximately five years ago and is described by the vendor as in generally good condition. Accompanying documentation consists of a number of old-style RF60 logbooks, including the original of 1924. Via bonhams.com

I confess to never having heard of the Croft Cameron company but with a little digging it’s easy to see why. They were in business from 1923 to 1926, a whole 3 years.

Like most of England’s motorcycle industry they were based in Coventry and only built the one motorcycle with a couple of variations available – The Super Eight, powered by a 996cc V twin built and supplied by British Anzani.

The Croft Cameron Super Eight was available in eight-valve form at £140, or four-valve at £125; there was also the option of a slightly larger ‘Plus Power’ engine (£145 and £130 respectively). The standard gearbox was a three-speed Sturmey Archer unit with kick-starter, a Jardine four-speeder being optional. The silencer was placed behind and below the gearbox – a common practice today, adopted in the interests of ‘mass centralisation’ – which just goes to show that there really is nothing new under the sun when it comes to motorcycle engineering. Via bonhams.com

According to Classic Motorcycle magazine (which are running a piece on the auction in Decembers edition) the sale price shows the vintage motorcycle market is holding its own.

There were other strong prices too (as well as the Croft Cameron), with V-twins once again grabbing the headlines. Head of Motorcycles at Bonhams, Ben Walker commented on the sale: “Prices were as expected and stable, the market remains strong with good interest in all areas of collecting. Via classicmotorcycle.co.uk

Images of the Croft Cameron Super Eight from bonhams.com

Ancient Hippy has been back in the saddle since 2017, having fallen for the Triumph Bobber. Mounts owned in a previous century include several pre-unit Triumphs, an old school chopper, an Honda CB750 Cafe Racer and an XT500 thumper. Click here for more about Ancient hippy