Although an Italian motorcycle, it was a couple of Brits we have to thank for the Laverda Jota, the worlds fastest production motorcycle of the 1970’s.

Laverda had released it’s triple cylinder double overhead cam 981cc C3 in 1973. It produced 85bhp, could top 133mph and could hold its own against most of the Japanese competition. More was to come though in a few years with the Slater Bros. Laverda Jota.

The Slater Bros. and their Laverda Jota

The Slater brothers raced the Laverda C3 as a way to promote their business and quickly realised that while fast, it definitely had more to offer. They convinced Laverda to let them have a tinker to see what they could squeeze from it.

They purchased the off the shelf tuning kit from the Breganze factory which included a set of racing camshafts and high compression pistons. They then changed the yolks to improve handling and developed a new exhaust system with Aeriel four Square specialist Tim Healey.

Laverda were so impressed with the brothers Laverda Jota that limited production began in 1976 at Breganze.

Capable of 146mph and producing 90bhp the Laverda Jota was the fastest production motorcycle in the world at the time and was a huge success For both Laverda and the Slater bros.

With the reputation of the Italian motorcycle spreading thanks to a successful racing season in the UK, Laverda started distributing the Jota worldwide.

The Beast of Breganze

There was a guy called Chris living on my mates road who was always working on his cars and motorcycles. He had a Dukes of Hazard replica car complete with the confederate flag, welded doors and air horn.

Myself and Billy were lucky enough to be hanging out on the street when Chris came home on a brand new Laverda Jota.

It was 1978, as I remember we were bunking off school trying to get an old Honda C90 going. At 15 we were both well into our motorcycles and Billy had a knack of being able to identify a motorcycle before he even saw it.

We listened to the Laverda Jota getting closer but had no idea what it was. Only when Chris turned the corner and started up the hill did we realise it was a Jota.

We walked down the hill to meet him and take a look at our first in the flesh brand new Laverda Jota. What a beast! Chris had pulled up on the road when we walked down.

Once we’d had a good look around it he tried to bump it up onto the kerb to get it down his garden path. Me and Billy both had to help him push it onto the kerb and although we were still kids yet to fill out, Chris was no lightweight.

That’s my main memory of that day, the weight and the sound. The tune was like no other motorcycle I had heard. It would be 1981 before I finally got to listen to that sound track from the cockpit.

The original Laverda Jota engine was just a tuned up 3C engine which used a 180 degree crank. The 2 outside cylinders rise and fall together and the centre pot is 180 degrees off.

This layout means the engine fires twice per 360 degrees instead of the usual 3 associated with triples.

It was the 180 crank that accounted for all that torque goodness and the unique Jota sound track.

After 1981 Laverda Jota’s followed the established route for triple engines and resorted to a 120 degree crank. This cured the vibration the 180 crank caused but the trade off was the loss of torque and that unique sound.

In 1982 Laverda released a Jota 120 which looked like the earlier Jota but without the originals brute force. You can spot one without hearing it as the ignition was moved onto the left side. It was quickly replaced by the RGA Jota which was nothing but a stripped down RGS and another let down.

If you are looking to invest in a Laverda 1000 Jota the earlier MK1 model is the most desirable. Many Laverda Jota fans don’t even consider a bike with the 120 degree crank engine as a genuine Jota.

The 1977 model for sale shown below has 50,000 miles on the clock, hence the price. It looks in immaculate condition though.

The 1980 model at £15,750 will not be around long as it comes with the Slaters import sticker still on the bike, a letter of proof from Roger Slater and plenty of history.

It has 28k on the clock and a dent on one of the exhausts but seems a bargain at that price and would be my pick from the current Jota’s for sale.

The original highly tuned Laverda 1000 Jota was only ever exported to the UK, South Africa and Australasia.

The Jota’s that Laverda exported to North America and some of the mainland European countries had a much milder factory tune up and most didn’t have the high compression pistons.

The Laverda Jota is still an affordable classic and the value of the genuine Jota’s should continue to appreciate.

These are an Italian motorcycle so as long as you stick to the maintenance schedule you should get many years of trouble free fun from a Laverda Jota.

Parts are plentiful and can be purchased from Slater Laverda who are still going strong and have the largest spares collection in the UK.

Laverda used many Japanese electrics on their motorcycles such as the nippon denso alternator. This made them much more reliable than most of the other Italian Marquees of the day.

The Laverda Jota is a big bike with a seat height of 32″ (810mm) and its an aggressive riding position which could have been a stretch for those with shorter arms. Probably in anticipation of this, Laverda made the clip-ons adjustable with 3 different settings so you could try and find a comfortable position.

The Laverda Jota looks almost clumsy when stood at the lights. Give it a handful though and that 180 degree crank and that brutal torque will quickly drag you up to the top speed of 140 plus mph.

It was that brutality that made the early Laverda Jota one of the most iconic and fastest production motorcycle of the 1970’s. 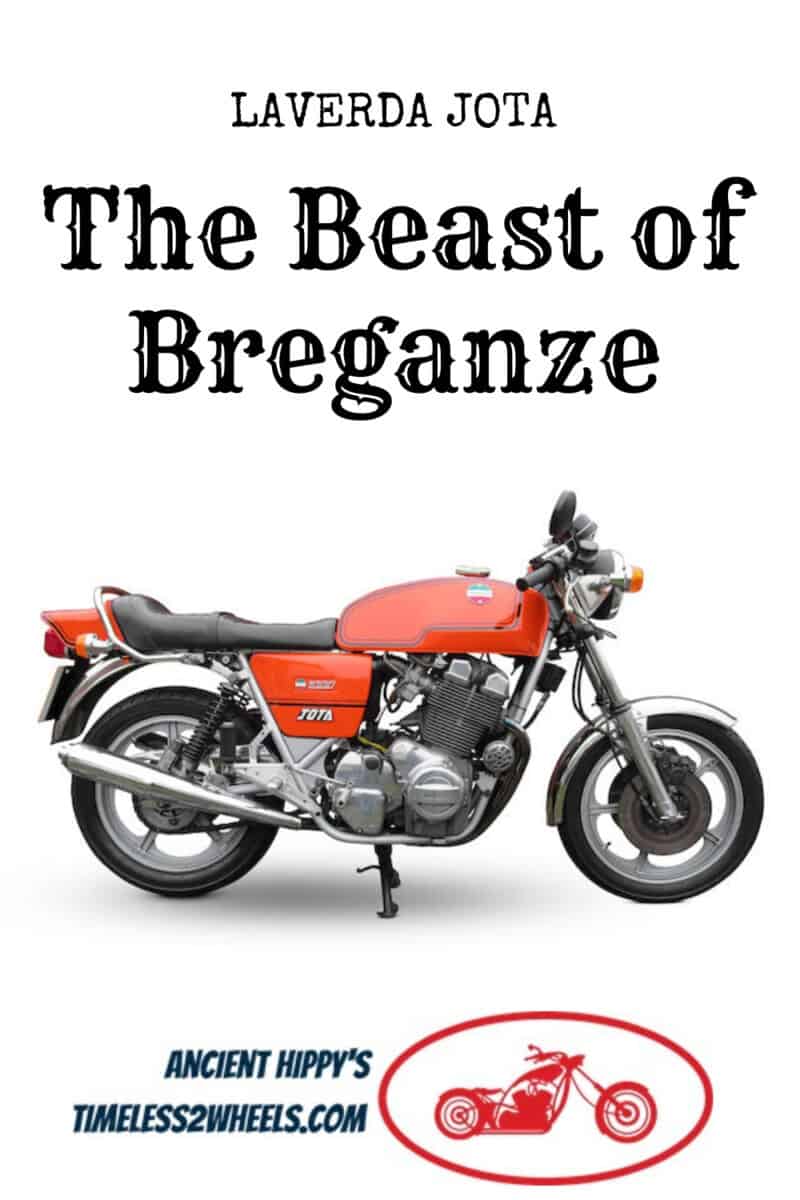