If there was a song written to describe the Ducati 916, it would be Chris De Burgh’s “Lady in Red”. A strange choice I hear you cry, but hold on a moment, let me explain.

In the modern era, we know Ducati as a manufacturer of exotic motorcycles, producing some of the most debonair bikes available to date, but it wasn’t always this way.

Prior to the release of the Ducati 916, the Italian manufacturers flagship superbike was the 900SS. The Super Sport was moderately successful, if unoriginal. It shared the same styling as superbikes being produced in Japan; large bulky fairings, a square headlight, twin swing-arms and side mounted exhausts which were standard during that time.

It certainly wasn’t an unattractive machine, utilising more curves than the Japanese offerings and Ducati’s trademark trellis frame. However, it didn’t light the room on fire or make you want to give it that second glance. This all changed with the Ducati 916.

While Mr. De Burgh is talking about his future wife, Diane, looking gorgeous, amazing and shining so bright he could just as easily have been waxing lyrical about the effect the Ducati 916 had on the world of motorcycling. It’s revolutionary styling stunned the press during the unveiling in the autumn of 1993.

Even to this day, many enthusiasts whole-heartedly believe the Ducati 916 was not simply the best looking superbike of its time, but the best there has ever been.

History of the Ducati 916

In 1985, Cagiva bought out Ducati to rescue the manufacturer from bankruptcy. As part of the agreed bailout, Ducati were under instruction to modernise its bike range to keep up with the relentless pressures the Japanese were inflicting with their constantly evolving superbikes.

The result of this modernising was the Ducati 851, their first production bike to embrace electronic fuel injection, which was introduced several years earlier by Kawasaki.

Released in 1987, the 851 had marginal success on the racetrack but still came up short with its impact in the motorcycle market only selling 3,000 units until Ducati discontinued it in 1992.

Cagiva’s owner, Claudio Castiglioni, made the bold decision to hire Massimo Tamburini, the co-founder of Bimota and renowned motorcycle designer.

Massimo Tamburini, once given the task to create the bike to revive Ducati, became obsessed with creating the “perfect” machine, making several innovative decisions that would influence the design of the brand for generations to come.

To ensure the Ducati 916 had a perfect 50:50 weight distribution for precision handling, Tamburini used the iconic steel trellis frame he had previously designed for the 1981 Ducati TT2. The 916’s liquid cooled engine was an evolution of the 888cc found in the Ducati 851, albeit with a larger displacement and new engine management system.

At the 1989 Tokyo Motor Show, Honda unveiled the prototype of the NR750. The influence it had on the attending Tamburini was profound, and much of the Ducati 916 design is owed to the NR. The single sided swingarm, dual-pipe under-seat exhausts and the projector beam slit-shaped twin lights all became trademarks of the next generation of Ducati machines despite being featured on the Honda first.

Tamburini would test-ride every single prototype to ensure the 916 developed according to his vision. Cycle World reported that he would “Purposefully ride it in the rain so he could see where the bike’s fairing caused excessive turbulence”, nothing, it seems, escaped his ferocious attention-to-detail.

Production finally went ahead in 1994. With the stir the Ducati 916 had caused the previous autumn at its official unveiling, the demand was high and the Italians had already sold out its entire first year’s pre-orders for the American market.

Unfortunately, because of the financial difficulties Ducati were still finding themselves in, production levels were low. These gradually increased and the popularity of the Ducati 916 undoubtedly revived the company and led to Cagiva selling the manufacturer to Texas Pacific Group, an investment company, in 1996, securing Ducati’s future. The Ducati 916 went on to sell nearly 18,000 units during its production run.

The 916 was Ducati’s most powerful road bike at the time of its release, but statistically remained underpowered compared to the competition. Its 916cc L-Twin engine generated an impressive 114 bhp, but Yamaha’s YZF-750, with its inline four-cylinder engine, trumped the Ducati with 120 bhp.

And yet the statistics do not tell the complete story. The Ducati 916 revved higher, up to 13,000 rpm, a thousand rpm higher than the Yamaha, giving it a wider torque delivery. This combined with its 50:50 weight distribution made the 916 extremely agile and easy to ride.

During its year of release, the Ducati 916 became every motorcycle magazine’s “Bike of the Year”. It’s unique and beautiful styling transcended the boundaries of the motorcycle market and it became a fashion icon, the latest thing to have within the celebrity world.

The 916 would also make several appearances in various movies and TV shows over the years, including Fled, No Way Back and Speed 2: Cruise Control.

The Guggenheim Museum, New York, featured the 916 during its “The Art of the Motorcycle” exhibition in 1998. One also remains on display at the San Francisco’s Museum of Modern Art.

Until the launch of the 916, Ducati had been performing moderately well in racing with the 851. Though, it would be Ducati’s latest offering that would create an era of dominance for the Bologna team.

Ducati immediately entered a 955cc race variant of the Ducati 916 into the World Superbike Championships in its first year of production. The 916 took the title that year and the following in the hands of Carl Fogarty, with Troy Corser doing the same in 1996.

Honda edged out Ducati in 1997 with the RC45 taking its only WSB title. The newly renamed Ducati 996 would take back the title in 1998 and 1999 in the hands of Carl Fogarty once more.

Honda fought back and won in 2000 with their new RC51 V-Twin, but Troy Bayliss took the revised 996R to overall victory the following year in 2001, giving the 916 series six WSB championships. Ducati holds seventeen WSB Manufacturers Championships and fourteen more in the Riders Championship, more than any other manufacturer to date.

The Ducati 916 was designed to compete on the track and yet still function as a road bike, making it maintenance heavy (the riding position will tell you Massimo Tamburini was giving little consideration for road riding). If you are in the market to buy an earlier model, make a B-Line to the service paperwork and ensure it has been maintained thoroughly by a reputable mechanic.

Checking whether the bike has been serviced every 4000 miles and the cam belt replaced every 10,000 miles are the key things to look for here.

Several older models of the Ducati 916 are readily available to purchase currently. The costs vary from £14,000 to £20,000 for the standard models. A Ducati 916 SPS will creep up and past the £30,000 mark for a mint condition as will the other exclusive special-edition models and the original 1994 variants.

The Ducati 916 is now 27 years old and sourcing parts is relatively simple for both new and secondhand parts. Jumping on your favourite search engine will uncover several companies that sell every part for the Ducati range with diagrams to help you find what you’re looking for.

Parts naturally come at a premium if new. Being from a discontinued model, and a Ducati at that, increases this tenfold.

For example; a new unpainted fuel tank will set you back around £1,100, while an excellent quality second-hand one will be kinder to your wallet costing nearer to £500. Before panic sets in, let’s compare these to a modern Ducati. A new fuel tank for a 2020 Panigale 1100cc V4 will cost £2,500, making the 916 looking much more affordable.

Below are a few places that stock and supply Ducati 916 parts to help get you started.

Is the Ducati 916 a good investment?

Finding an original Ducati 916 from 1994 for sale is incredibly rare, I found just two while researching online. The first was up for restoration on eBay with 25,000 miles on the clock. The bid is currently at £8,200 with a day left to go, I’ll be excited to see how it turns out.

Should the 916 I found on auction sell for double its current offer, it would still be an excellent investment for the new owner if they meticulously restore it to its former glory.

A friend of mine had the pleasure of owning a 1995 916 Strada. For him it was a toy, not a daily commuter or casual use bike. He would enter drag races every month on his modified Ducati 916, enjoy a weekend of fun and spend the rest of the month rebuilding parts of the engine and gearbox for the next race.

This is a very specific example of someone knowingly pushing a bike to its limits and having to repair the damage. This is a mark of the reliability of the 916 not quite being on par with the Japanese bikes of the same generation.

That being said, you don’t buy a Ducati and expect it to run for thousands of miles without any issues. You buy a Ducati for how it makes you feel whenever you look at it, for when you fire up the engine and blast off listening to that glorious Desmo soundtrack.

The Ducati 916 undoubtedly saved Ducati back in the 90s and it has remained an icon in the motorcycling world ever since. Personally though, if I had enough cash at my disposal to consider purchasing the 916, I’d probably instead spend it on the bike that inspired the Italian saviour, the Honda NR750. 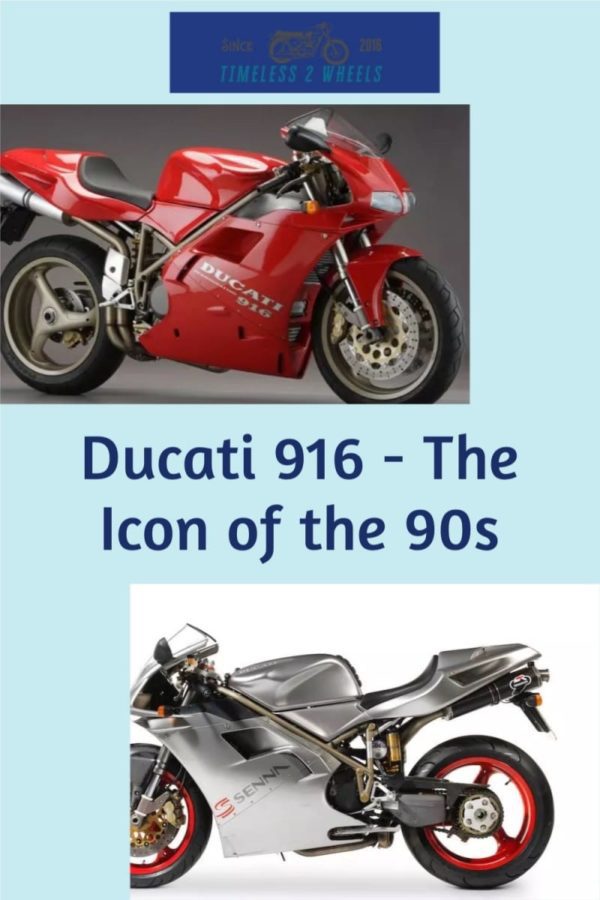