The Triumph stand was particularly busy at this years Motorcycle show at the NEC (Birmingham, England) when I visited on Friday and it seemed most like me were wanting a first sight in the flesh of the eagerly awaited new Bonneville Bobber.

Here’s a video I took of it on the 360 turntable together with some photos.

First impressions are that it looks slightly smaller in the flesh than it does on Triumph’s promotional videos although I’m still very impressed with the amount of thought Triumph have put in to ensure it captures the classic Bobber look.

They have genuinely pulled off the hard tail look, the traditional battery box complete with metal strap is a nice touch, fake carbs, hidden wiring, great looking seat etc. all make the Bonneville Bobber the best ‘off the shelf’ of this motorcycle genre available by some distance.

One of the triumph guys told me there were around 150 planned optional extras for the Bonneville Bobber. I was made up to hear that one of those was a side mounted number plate which would really compliment the Bobber styling as well as helping to make the rear fender look a bit shorter. Here’s a shot from the back. All but one of the Bonneville Bobbers on show had the optional ape bars fitted. Feedback must be telling Triumph something I don’t see because it ruins the bikes looks in my opinion.

Look at those peashooters from behind! You can get a good idea of the seat height from looking at the guy stood next to it. This fella rides a 1000cc hyper naked flying machine from Yamaha and found it small ‘for a 1200.’ He also thought the clock let it down, saying it felt a bit cheap compared to the build quality of the rest of the bike. 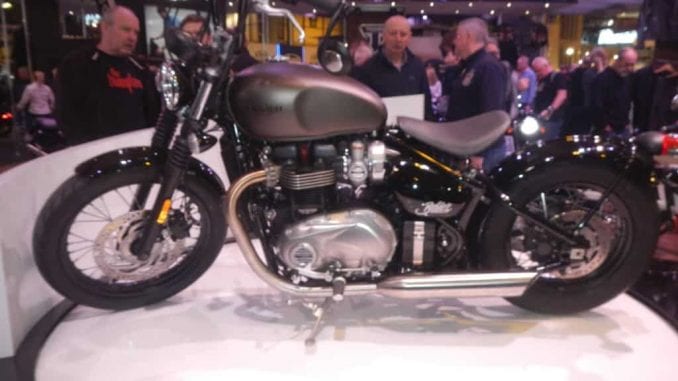 As you can see the Bonneville Bobber pulled in quite a crowd with most people appearing to give it the nod of approval although it did seem as if most of the admirers were all of a certain age group.

Pleased to report that I didn’t witness or hear anyone turning their nose up at the new liquid cooled Bonneville engine. Long time Triumph owners can be a bit snobbish when it comes to traditions. I for one used to love it when a rider of a Japanese bike would sit on one of my old pre-unit Triumph’s and then exclaim “oh, everything is on the wrong side.’

‘No mate, Triumph were here first, it’s yours that’s on the wrong side!’ I was a smug Bastard on that bike (while it was running).

Triumph and the other British manufacturers had to change the side with which the brake and gear shift went due to American demands for standardised controls to be fitted to all imported motorcycles in the 1970’s.

Manufacturers have now been told by the EU that they must meet strict emission targets by next year or they won’t be allowed to sell in the European states so most are turning to water cooled engines.

Triumph have survived far worse and come out a better, bigger and stronger brand for it. Judging by the amount of interest the Triumph stand was generating I see only good times ahead for the iconic British motorcycles.