With over 37 different variations to date and a bike that accounted for 42% of all Ducati sales throughout the 90’s, it is definitely worth a deeper look into the Ducati M900. Let’s get into it.

The Ducati M900 is considered by many to be the bike that saved the Italian marque from going bust in the 1990’s. Had the Ducati Monster not hit the market at that time and been received as well as it was, Ducati would have folded. They were financially crippled and struggling to keep their heads above water.

Even though times were financially tough for Ducati, the M900 was never actually destined to be a Ducati and was initially set to be a Cagiva model.

It was a very last-minute change of heart that saw it carry the Ducati badge. This combined with Ducati’s lack of credit with suppliers meant the Monster M900 very nearly never even made it into production at all.

This tale of survival that turned into an iconic staple spanning almost 30 years all started with a poster of Marlon Brando in The Wild One.

Massimo Bordi, the manager of Ducati at the time, was taken aback by the poster and wanted a bike created that was simple, powerful and evoked the true freedom of just riding. All of which Bordi extracted from that Brando poster and translated to Miguel Galluzzi.

Miguel Galluzzi, a renowned designer, who later went on to design the legendary RSV4 for Aprilia, believed in raw machines and the idea that “all a bike needs is a saddle, engine, two wheels, handlebars and tank to fill with fuel…”.

When Bordi came to him with his ‘The Wild One’ muse, Galluzzi seized the opportunity to finally create the raw machine he had been dreaming of.

The engine was derived from the 900SS and steel trellis chassis from the 888 unit. The end result was agile-handling, plenty of power, cafe racer styling and it was all tied up in a practical package.

The Bologna factory would go on to release over 37 variants of that first Ducati M900, the latest being the new 2021 model. To say it was a hit when it was released in 1993 would be an understatement, they could never have predicted the success.

Let’s have a look at some of the various models over the years and a little deeper at how the Monster was received.

The production figure for the 1993 Ducati M900 was initially set for just 1,000 bikes, which showed the lack of belief/commitment Ducati had in the Monster. After the positive reception at the Cologne show, it was clear they would need to ramp up production.

3,000 M900’s were produced eventually for the debut model and it left dealers across the world eagerly anticipating the next shipment. 1,500 of those units were sold in Italy alone.

Australia was a key market for Ducati and they only received 40 Monsters in the first year, customers were on waiting lists across the world and the Monster’s reception overwhelmed Ducati.

The Monster M900 was arguably responsible for the creation of the on-going popularity of naked, street-fighter styled bikes and stood out amongst others bikes of the time, with reputable Italian excellence and premium parts. Comparative to competitors that looked relatively plain, boring, built for commuting and thus pretty uninspiring.

1994 saw the release of the Ducati Monster M600. A scaled down version of its big brother, built to appeal to the mass market. The Ducati M900 was out of many of its potential customers price range and in order to appeal to everyone a smaller more affordable version of the Monster was the way to go.

It was lighter, lower, more agile and suited for city riding, with a 584cc air-cooled, L-Twin engine it still delivered 51hp and 52Nm of torque; more than enough power for most.

Crucially it was £2,500 less than the Ducati M900. This small version was received tremendously well and attracted a younger audience to the Ducati brand, on the basis, that now it was affordable.

1996 the M750 was released. It remained on Ducati’s production line until 2003 and sales continued to tick over, the bike was a filler between the M600 and M900, and so was not the most popular model in the line-up.

Customers either wanted the smaller more affordable option or would save a little more for the Ducati M900. With that said the M750 ticked over, sales were enough to deem it worthy to remain in the line-up for 7 years.

1997/8 Ducati dips it toes into the world of customising production models with the release of the Dark and Cromo versions of the M600. The Dark model being as the name suggests dark and moody, loosing the Ducati red paint scheme for black and the Cromo having a shinier edge with its stand-out reflective tank.

The idea behind this was to encourage more into the Ducati fold by giving edgier options to its customers, prompted by the growing custom scene that the Monster was in the centre of.

1998 was also the year of the Ducati M900 S. An improved flashier version of the original Monster M900, improved front suspension by Showa, and improved performance of the rear Sachs unit.

Additionally, carbon side panels and mudguards were added, among a few other accessories to ‘fancy’ it up a little bit. The bike ended up being 2kg lighter than its predecessor but remained pushing out the same power.

2000 the M900ie sees the engine refreshed to produce slightly more power and torque and most notably the first model to gain fuel-injection. New forks were added and a digital dash replaced the old unit.

2001 was the year of controversy for the Monster range. An introduction of the first water-cooled models with the S4 (4 valves per cylinder). The thinking was to add an even sportier Monster to the mix and with a new re-tuned Desmoquattro engine from the Ducati 916 used, it certainly worked. Pushing out 101hp with 92Nm of torque it was a true Monster.

However, the necessary addition of pipes and hoses for the liquid-cooled engine distracted from the traditional simplicity of the Monster that Galluzzi had designed.

Ducati brought out the S4 Foggy rep in 2002 and a year later the S4 increased in capacity to 996cc to become the S4R with a single sided swingarm and twin stacked pipes.

2003 was another big year or change for the Monster range, the M1000 arrived in the line-up with a 992cc engine just slightly bumping up power for the top end Monsters.

The M750 also became the M800 and the M620ie was the first model to introduce Ducati’s APTC clutch. The APTC clutch was designed to reduce the traditionally heavy clutch and also had a slipper action. It is still in use for Ducati today.

2005 was the year of the S2 range which was aesthetically the same as the S4 with twin stacked pipes and single sided swingarm but they had air-cooled engines at the heart of them.

2007 was the release of the S4RS with a new testastretta engine dropped into the machine with 126hp and Ohlin’s suspension. This was to be the last of the water-cooled models from that era as they were dropped at the end of 2008.

2008 birthed a whole new look for the Monster range, a new squatted stance and twin piped exhaust under the seat. The new M1100 was bigger and better than ever, radial brakes and a full digital tech advanced dash were added, as well as Ohlin’s suspension to the S models.

2011 was the first time the Monster range gained electronic assists like ABS and traction control, also a wet clutch.

2013 the 20th anniversary Monster was celebrated with styling and paintwork honouring the 1993 original.

2014 7 years after the new look, the Ducati Monster changed again with the demise of the air-cooled engines, which wasn’t going to go well with Monster purists.

The new liquid-cooled engines meant it wasn’t possible to stick as stringently to Galluzzi’s original design but they did stay fairly close to the ideology.

There is also no arguing with the improved performance figures as a result of the swap.

2023 will see 30 years of the Ducati Monster range and with a new model released for 2021, it is pretty safe to say the model will make it to its 30th anniversary, which is quite a feat for a bike that was never destined to be and inspired by a poster.

With so many variants over the years there are plenty of Monsters on the market to choose from.

However, the older the model, the harder and more expensive they are to find, the change comes at the 2000 model mark and around the 2008 model year when the shape was drastically changed.

Car and Classic have a 1996 Monster for auction by Sotheby’s Canada branch with an estimate of £10,000.

90’s Monsters, are rare on the market and should you find one they are likely to be in Europe.

There are parts a plenty for a restoration project, as despite upgrading engines and changing small things in the early days, most parts remained the same or very similar over the years.

Bear in mind that Ducati is a premium brand and therefore, compared to say a lot of British marque’s, you may find parts slightly more expensive.

The main problem as with buying an early Ducati M900 is finding a donor bike to begin with, and the cost of doing so. Italy would be the best place to look, but for US collectors you will need to factor shipping costs into your budget.

Is an early Ducati M900 a Good Investment?

There is no question on the investment potential of an early 90’s Ducati M900 Monster especially coming up to the 30th anniversary. If you can get one, and keep hold of it, I would expect to see some rising value over the next few years.

Post 2000 models, I would also expect to see some increase in value, not quite as much but still a rise as collectors will want to cling on to the air-cooled models.

Anything over 2008 for right now I wouldn’t expect a big rise in value, the bikes are still being used and ridden and are not yet in the bracket to be considered classics but more of an evolution of the original design.

However, who knows. If the Monster keeps going it is likely that one day we will look back on the revolutionary change of the 2008 model and wish we had picked one up.

The Ducati Monster started with a poster of Marlon Brando, saved Ducati and it continues to evolve with each generation. For around £4,500, I would be tempted to pick up an early 2000’s model and have some fun with the air-cooled beast.

I could pretend I’m rolling around Rome then out into the Italian wine country, even if I’m really riding through rush hour traffic in the city getting soaked, but hey, we can all dream and who doesn’t want to be a ‘Wild One’. 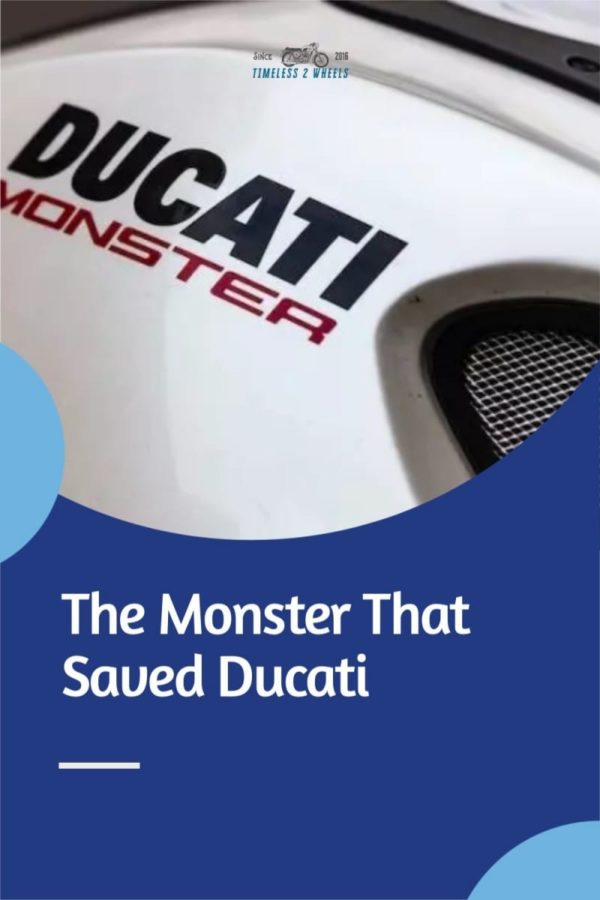 1 thought on “Ducati M900 – The Monster That Saved Ducati”