On its release in 1992 the Honda NR750 (aka the RC40) cost $50K, was limited to a run of just 200 motorcycles and was the only chance the motorcycling public got to own a bike using Honda’s oval piston engine which they had been developing since the 1970’s.

Here’s the story of how the Honda NR750 and the oval piston engine pushed the boundaries and how the motorcycle itself became one of the most collectable bikes of recent times.

Many production motorcycles have been labelled as pioneering over the years; the BMW  R100RS which used fairings for the first time, the Honda CB750 was the first superbike and used a four-cylinder engine, the Kawasaki KZ1000G introduced electronic fuel injection, and the Suzuki RG250 Gamma the aluminium frame. There were many more.

Following the initial launch of each bike, both the public and media reacted with great excitement and had nothing but praise to give. The advance in technology each bike represented played a huge part in their reception and each sold by the thousands.

Every one of these bikes pushed the boundaries of technology and redefined the motorcycle market during their era. But no-one had tried to go one step further and create a production bike with an unrestrained budget and ideas. This idea of creating an unrestricted “race bike” for the road had not previously been attempted before until the Honda NR750 was unveiled in 1992.

The birth of the NR series began back in 1977 with Honda’s return to Grand Prix racing. Honda had always preferred to use four-stroke engines, both in their production and racing models. However, during their absence from the racing world, two-stroke engines had become the norm because of their ability to attain a higher power output than that of a four-stroke with the same capacity.

Unwilling to follow the rest of the field, Honda stuck with their four-stroke ideals but needed to generate more power to contend with their two-stroke rivals. Grand Prix rules only allowed the maximum of four-cylinders in an engine and a capacity limit of 500cc.

Already operating with the maximum number of cylinders from their inline-four engine from the short-lived, but successful RC181, this presented Honda with a problem they had to get creative to solve.

Squeezing all of this into the dimensions of a standard V4 was immensely complex and created no end of problems. Honda persisted and in 1979, they successfully entered the NR500 into Grand Prix racing.

The extra power produced by the engine translated into 130bhp at an astonishing 20,000rpm. Unfortunately, this was still not enough to contend with the dominating two-strokes.

Honda persevered for two more years, but a combination of poor reliability, lack of power, and endless maintenance forced Honda to admit defeat and abandon the project.

The NR500 was replaced in 1982 by the faster two-stroke NS500, shortly followed by the hugely successful NSR500.

Around the same time, the FIM (Fédération Internationale de Motocyclisme) changed the rules to allow turbocharged 250cc bikes into the 500cc class. In response, Honda built the NR250 turbo, using the same technology from the NR500, including the oval-piston engine. Albeit this time in a V2 configuration.

Déjà vu sadly struck again, and engine complications meant it never made it past the dyno testing stage and it was shelved alongside its 500cc sibling.

Later on in 1987 the NR was back, this time as a 750cc V4. The NR750 was the most powerful and most technologically advanced four-stroke racer at the time. However, due to the 500cc capacity limit it wasn’t eligible to race in any GP series. Knowing this, Honda entered the NR750 into endurance racing instead.

The first outing for the Honda NR750 was at the 1987 24 hour Le Mans Race. In the hands of Australian superbike champion Mal Campbell, it qualified in second place. The race did not go so well, with the NR750 forced to retire several hours in because of an oil blockage that resulted in an engine seizure.

The Australian Swann Series was the next attempt at victory for the NR750. Back in the hands of Campbell, it would win one race and achieve several podiums but sadly missed out on the overall series win. Eventually the NR750 retired, never to be seen at a racetrack again.

Over the next few years, Honda worked behind the scenes. They still believed in the technology of the oval-piston concept and were determined to make it work.

In 1992, Honda unveiled what they had been quietly working on. This time however, they avoided the race track and concentrated their efforts on an all-new 750cc V4 production machine, simply called the NR.

The NR showed the world what a superbike could, and should, be. Its vast range of technological advances included:

For a bit of perspective, consider the fact that many of the high-end superbikes were still using carburettors, right-way-round forks, bulky plastic or fibreglass fairings, analogue dials, and some were still produced with steel frames.

Of course, the most important component of the NR750 was the engine. The evolved V4 750cc oval piston, 32 valve technological wonder that first appeared 13 years before in the NR500.

The NR750 was Honda flexing its engineering muscles and letting loose its creativity and passion for the world to see. Yet, rather than stand back and bask in the glory of what Honda had achieved, the public and media responded by complaining about its “expensive” price tag and how “over-complicated” the oval piston engine was.

The significance of Honda’s creation may have been overlooked by the masses, but it caused a different kind of stir within the motorcycle world.

The advancements Honda had made with the NR750 grabbed the attention of the other motorcycle manufacturers. By putting on display what could be done, Honda had thrown down the gauntlet which pushed everyone to up their game and create new and improved models, all taking inspiration from Honda’s NR750.

The world renowned Ducati 916 was redesigned after its creator, Massimo Tamburini, saw the unveiling of the Honda NR750 at the Tokyo Motor Show and decided to make changes to his design.

Tamburini openly admitted the NR750 back end directly inspired him to add the under seat exhaust and single-sided swingarm to the 916. Just think what the motorcycle world would have lost if he hadn’t attended!

Only 200 NR750 production models were ever made, with just eight imported into the UK. The last one that was up for sale sold for £100,000 in January 2021, a 100% increase on their value from 10 years prior. Despite an extensive search I did not find any models currently for sale, rare they certainly are.

Checking through the history of those previously sold, all had low mileage and did not require any restoration works. It appears that the NR750 has become a collector’s bike to store away as a long-term investment, rather than a bike to ride. The value of the NR750 seems set to keep on rising, boding well for anyone hoping to invest in this bike.

NR750 spares, whilst easy to order, can be astronomically expensive as many need to be produced on-demand. For example: the rear bodywork that encases the shotgun exhausts, seat and fuel tank, in its special carbon fibre and fibreglass mix, will cost nearly £7,000. Just one of the NR’s special cylinder heads would set you back around £10,000.

With the price of spares this high, it’s not surprising that many owners have left them safely locked away for years.

The NR750 never sold particularly well. Despite its incredible engineering, the performance was on par with the more affordable superbikes of the time, a theme of common discussion amongst its critics.

Was the NR750 faster or more successful than a superbike a quarter of the price? No. But what the Honda NR750 did was show the world that marvels of engineering can emerge from a restricted set of rules.

It did take Honda a long time to get the oval piston engine working correctly, but the technological advances that resulted from doing so were worth it.

It’s due to the Honda NR750 that we now have high-spec motorcycles with advanced materials, components and technology that makes them faster, lighter, more reliable, safer and easier to ride. What Honda did was produce a bike a decade ahead of its time and in doing so, gave us a glimpse of the future.

The engineering team at Honda who created the NR series were relatively young and faced a herculean task. They completely threw themselves into the project and didn’t accept that it wasn’t possible, they persisted and kept focused on working out how they could do it.

This “no-limits” attitude resonates with something deep inside me, showing the world what can be done when not constrained or as Honda said in their NR750 brochure “There is no limit to the places a dream can carry you. All it takes is the determination to get there.”

Should I someday have the funds, the Honda NR750 would be the first bike I would search for and buy and I wouldn’t even haggle on the price. 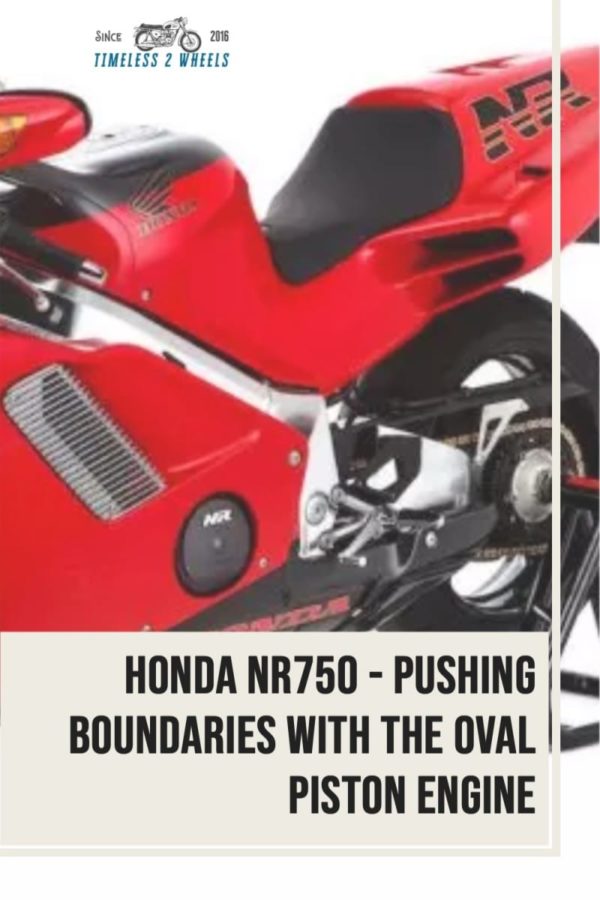