The Suzuki GT750 was an oddball machine when it first made an entrance way back in 1971.

Known as the Kettle, Water bottle or Water Buffalo, the GT750 rolled off the production line as Suzuki’s answer to the dawn of the superbike, but in the end it was best suited as a tourer. Let’s have a look at why today the Suzuki GT750 is a very popular ‘buy to ride’ classic.

In 1969 the Honda CB750 was released which today is considered by many to be the world’s first superbike. This meant the competition needed to offer something that could compete with the ‘big’ Honda.

Suzuki responded with the GT750 and although it missed the mark in offering the same superbike capabilities of the Honda, it was a hit with the motorcycling press and public, that still remains consistent today.

It was a water-cooled, 738cc, 2-stroke triple and though produced in 1971 it was released as a ‘72 model. The engine was a Suzuki twin T500 Titan engine with a third cylinder added.

The inline triple engine, bright paint schemes including Candy Lavender, combined with being the first mass production Japanese motorcycle to have a liquid-cooled engine meant the GT750 was out there and it caused quite a stir amongst the motorcycling press and public.

The liquid-cooled engine was momentous as it was also the first production bike to be liquid-cooled since the Scott two-strokes in the 20’s and 30’s.

The bike was powerful, but its 530lbs meant it was heavy and it was built tall and wide. It was a comfortable tourer and could happily cruise at high speeds. The problem was that riders expected a superbike like the CB750 and the fact is, it just couldn’t match the Honda.

It had a 5-speed gearbox and three-into-four exhaust which stylistically was appropriate for an already quirky looking bike.

The front drum brake was the bikes main downfall with the public, many manufacturers by this time had switched to a twin-disc brake for their big bikes.

For the 1973 model the drum brake was swapped for twin-discs, which was purely down to the pressure from riders at the time. The GT750K model also received lots of additional chrome, including replacing the previously painted side panels.

Etsuo Yokouchi was the engineer behind the GT750 and he visited Europe in 1973 to listen to what the European dealers were saying and hearing. What he learned was that the bike needed more power and a better lean angle.

By 1974 the GT750L had slimmed side panels and carbs were changed to 40mm Mikuni CV type, also the forks lost their gaiters. The cooling fan became an optional extra and the bike gained a gear position indicator.

The exhausts were also redesigned, lean angle improved and engine tuned up slightly for more power.

Over the following years until 1977, more small improvements were made and aesthetics slightly changed. Overall however, from its first bike to roll off the line, it was smooth, capable, and you could comfortably crunch miles all day on the GT750.

Test riders, press and eventually owners of the 1972 model complained so heavily about the incompetence of the front drum brake that it was only 12 months later that the pressure caused the change to twin-discs.

Even this didn’t satisfy everyone as the twin discs were hopeless in the wet, a common problem for all manufacturers at the time. Having been given the dedicated “Grand Tourer” title it wasn’t an ideal situation, touring usually equates to some wet weather riding.

The connecting pipe between the left and right exhausts had been leaking on some models. So by 1974 after hearing of this Suzuki redesigned the exhausts. Japanese manufacturers had a reputation for really listening to their market and responding, Suzuki’s GT750 improvements year-on-year were a prime example of this.

The GT750’s true success is its longevity, so let’s look at the options for buying an original today or indeed restoring one.

Nobody can really explain why the GT750 is still coveted today or even at the time of its release. Maybe because it fills its own niche and some people still like things that are a little bit different.

Regardless, when searching through listings for the ‘Water Buffalo’ in the States $2,000-$5,000 seemed to be a solid price on Smart Cycle Guide.

For many of these, the bikes were mainly original, but quite heavily used. You could expect to find one at around $10,000 – $15,000 for a true original in very good condition but they aren’t common.

What should you look out for when buying a GT750?

As with all classics there are some basics to check for when buying an original Suzuki GT750:

More GT750’s were sold in the US so it easier to find parts as well as donor bikes in America, parts are also that bit cheaper than in the UK.

There is also a pretty good replica parts market that would accommodate a GT750 build. For those in the UK it may be a good idea to make a list and try to get all the parts you need imported from one seller in the US, even with the costs of doing so, it may work out financially better for you.

Some examples of prices are as follows:

Is the GT750 a good investment?

The Suzuki GT750 is the ideal buy to ride 70’s classic. It will pull like a train and give you unadulterated fun. Its also a two-stroke smoker and will draw a crowd wherever it’s parked up.

You will be riding a classic bike, but with solid performance that gives some modern bikes a run for their money – certainly for touring and style.

‘Modern Classics‘ are the popular theme with motorcycles right now, with manufacturers reintroducing their classic bikes but this time with modern tech.

If you are like me and can do without the electronics and other fancy stuff, the Kettle is the perfect bike. Pure power, grunt, comfort, albeit with some quirks, but that’s more fun right? And it is a superbike after all (maybe, depends who you ask).

The price range of those on the market are so varied, but well done restoration projects are fetching really good money. eBay UK had one listed at £17,000 fully restored and it was a very good looking bike, with all Suzuki parts.

I would suggest as time goes on value will increase and would expect the Suzuki GT750 classic to continue to be appreciated by collectors.

My Grandad had a blue Suzuki GT750, and I have pictures of me sitting on it. Unsurprisingly, I have a soft spot for the kettle.

The grunty beast was a feat of Japanese engineering to be admired, as well as the two-stroke smell and noise. For an early 70’s bike to still be able to compete with some of the modern touring bikes of today, I think it should continue to be revered as a superbike in more ways than one. 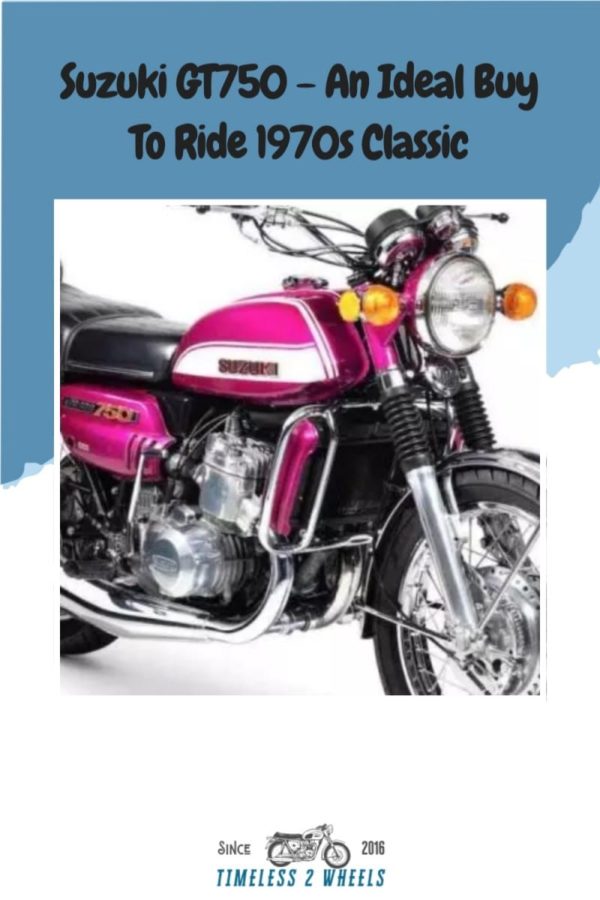