Harley Davidson is one of the oldest motorcycle manufacturers in the world, established in 1903. In 2020 they sold 180,248 new motorcycles worldwide, which got me thinking about where they are made, so I’ve done the research and found the answer for all those who might be wondering the same.

Where are Harley Davidsons made? Harley Davidson has factories in the U.S, Brazil, India and most recently Thailand. This is where their motorcycles are assembled and some parts manufactured. They also contract factories worldwide to manufacture parts which they then have shipped to one of their assembly plants.

So why has Harley moved some of their manufacturing out of the U.S and how much of a Harley Davidson motorcycle is actually made in the U.S? Let’s get into this and more now.

Why have Harley opened up plants in Brazil, India and Thailand?

Harley Davidson until 2019 had four factories in the U.S. In 2019 they closed their Kansas City plant, and there was some controversy about this as the same year they had opened up a factory in Thailand.

Harley insists that the factory in Thailand was required for investment in the overseas market and the Kansas City plant closing was not a direct consequence of moving manufacturing outside of the U.S, but rather a separate decision.

The Thailand plant was a decision made on the back of increased import tax on steel and aluminium to the U.S. Also, increased E.U tariffs to export motorcycles from the U.S to EU and U.K meant that producing motorcycles for the European market was no longer viable directly from the U.S.

Harley made a decision to absorb the increased costs instead of passing them on to their customers with increased motorcycle prices. So, opening a plant in Thailand would allow them to bypass some of these increased taxes and maintain costs for the predominantly European customer.

It is not known if the Thailand plant is running at full capacity at the moment, in 2019 Harley said it would take 12-18 months to get things up and running.

Harley Davidson began business communications with India in 2009 and it was 2011 when the Sportster and Dyna range started to be produced/partly assembled (depending on which market it was being sent too) at the Bawal, India factory. Initially the U.S sent component kits to India for assembly but this was later scrapped and the Indian factory was soon producing their own motorcycles.

The manufacturing of Harley’s Street range with the Street 500 and 750 was outsourced to be manufactured in India, as Harley’s new entry level models it made sense to keep costs as cheap as possible. Harley was hoping that the new Street models would appeal to the Asian and European market, with them being the smaller capacity engines and more affordable but still carrying the premium HD brand.

The Brazilian factory in Manaus was opened in 1998 and the factory produces motorcycles strictly to be sent out for the Brazilian market. At the time this move was made by Harley to combat trade restraints and steep export taxes from the U.S to Brazil.

Do HD have plans to open a plant in China?

In 2019 rumors surfaced that Harley Davidson was planning to open up a plant in China. This would be to manufacture new lightweight machines predominantly for the Asian market. They are said to have partnered with the Qianjiang Motorcycle Co and there is a potential 338cc bike on the way.

Harley’s plan is to source all sales outside of the U.S by 2027. Affordability has been the main issue for Harley with the international market, smaller capacity machines will help bring the costs of Harley ownership down and increase sales worldwide.

Were HD’s produced in Japan during the Great Depression?

Harley Davidson motorcycles were manufactured in Japan from 1929, throughout the Great Depression and the contract continued until 1958.

These vehicles were manufactured under the Harley Davidson badge for military and police only.

How much of a Harley Davidson is made in the USA?

Harley Davidson has three factories in the U.S, each one is responsible for different models/parts/accessories:

All Harley Davidson motorcycles for the U.S market are produced in the U.S. More specifically however, some parts are manufactured here, some are manufactured elsewhere but they are completely assembled in these U.S factories.

Harley Davidson contracts parts to be manufactured from various factories around the world in places such as Germany, Taiwan, Japan, Mexico and Italy.

These parts are then imported to the relevant U.S factories, the motorcycles are assembled and then sent out to U.S based Harley Davidson dealers.

The Harley Davidson plants in India, Brazil and Thailand are all assembly plants and parts from all over the world for various models will be sent to these plants for assembly for different markets. Australia had a Harley Davidson plant in Adelaide until 2019 when this too was closed down.

It is unknown the percentage of how much of a Harley Davidson motorcycle is actually manufactured in the U.S as it is widely understood that this varies from model-model and year-year. It is known that it is not just accessories like seats and widescreens that are contracted out overseas but also key engine components too.

Should it matter if your Harley wasn?t made in the USA?

Harley has a plan to secure half of all its sales from the international market and in order to do that it needs to outsource manufacturing from the US.

There is no reason why Harley shouldn’t be given the opportunity to compete in these emerging markets. A price tag of $20,000 isn’t going to attract customers in lower income countries but a price tag of $5,000 might just do that. It levels the playing field for everybody to enjoy Harley Davidson ownership.

Harley Davidson has its headquarters in Milwaukee, Wisconsin on the site of its very first factory which was little more than a shed in a backyard. Further to which the company has four product development facilities in the US:

This is where Harley Davidson motorcycles are designed, turned into prototypes and tested, including the futuristic Livewire.

Harley Davidson is proud of its American heritage, and continues to influence and impact the US economy, does it matter that a certain bolt or speedo is contracted to a manufacturing source outside of the US? Surely not, if the motorcycle’s performance is of the same standard that people have come to expect of Harley Davidson bikes.

Would people be happier if all Harley Davidson motorcycles inclusive of all parts were made in the US? Maybe, but would they also be happy with the extra costs this would involve that would no doubt affect the price of their beloved motorcycles? Probably not, and this is why in order to survive some manufacturing has to be outsourced.

It doesn’t change Harley’s American heritage in my book.

As much as I would like to think that Harley Davidson motorcycles are 100% completely produced in America with it being such an institution and leader of Americana culture. I also understand that in order for Harley to be able to provide motorcycles to the European market and across the World, there are sacrifices that need to be made.

Being in the U.K, if Harley hadn’t decided to combat EU tariffs with opening a plant in Thailand, there was a chance that I wouldn’t be able to get my hands on a new Street Bob, which frankly would be unacceptable not just for me but all Harley Davidson fans this side of the pond.

Besides, you can still ride your Harley Davidson to your local diner and order the biggest cheeseburger you can buy while listening to Elvis and appreciate all the finest things the USA has to offer.

What other motorcycles are made in the USA?

Polaris industries who owns Indian Motorcycles which is Harley Davidson’s biggest American competitor is also known to outsource its manufacturing.

Honda produced the Goldwing in Marysville, Ohio from 1980-2010. From the 2011 model year all Goldwings are now produced in Japan. The Goldwing was marketed for the US market and this is where it sold best. Honda started to move all of its motorcycle production back to Japan and this decision was also made for cost-effective reasons.

There are some small custom motorcycle brands that are produced in the US but these are few and far between. They include Big Bear Choppers and Boss Hoss Cycles. Bourget’s Bike Works Inc use 98% American made parts in their motorcycle builds.

It is safe to say that most American motorcycle manufacturers and the big wider world marques such as Triumph (who also have plants in Thailand, Brazil and India), all outsource some part of their manufacturing process, whether it be just for parts or full assembly. 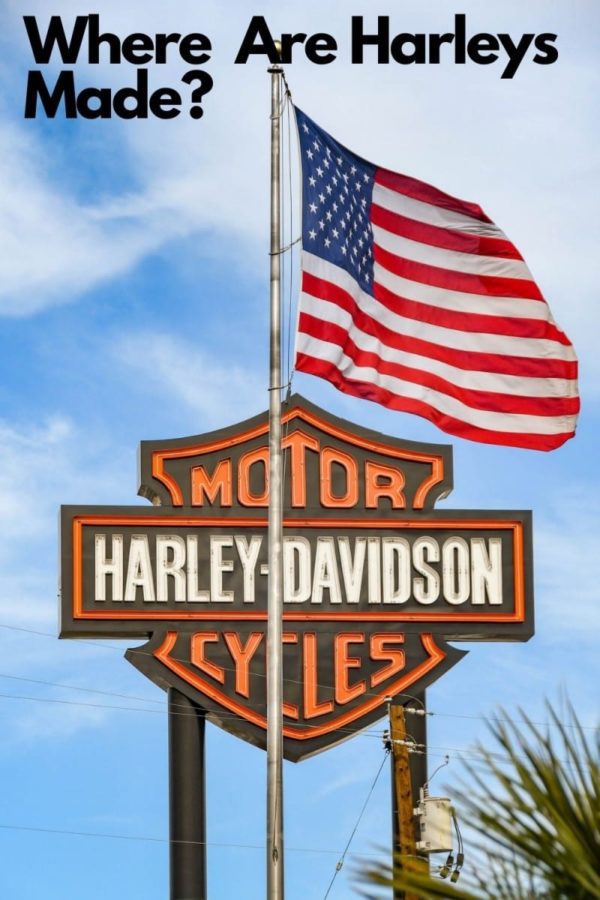