Like many of us I was excited by the release of the new Suzuki Katana in 2019 and when I later saw that glistening Samurai Sword displayed above the bike in my local dealer, all I could think was, it really isn’t that different from the original Suzuki Katana.

So today let’s look back at the birth of the original Katana GSX1100S and how it stood out as one of the motorcycles of the 1980s.

History of the Katana GSX1100S

The Katana hit the scene in 1980 and little did Suzuki know that the family of bikes under the Katana name would become legendary, much like the Kawasaki Ninja and Honda Fireblade to follow.

At the height of sci-fi madness with the likes of Star Wars at the peak of their popularity along came the Katana GSX1100S, all metallic, robot-esque with a splash of spaceship for the styling, it was a crazy professor’s motorcycle and it was a beast! The original Katana was flagged by Suzuki as the ‘World’s Fastest Motorcycle’ so not only did the Katana have the looks but it also had the performance.

Manfred Becker who was Suzuki Germany’s Marketing Manager sent the project to an outsourced stylist called Target Designs in Germany. The reasoning being was that Suzuki was worried the public were getting bored of generic Japanese designs and so they wanted something more European and different.

Jan Fellstrom was the main creative lead behind the Katana design along with Hans-Georg Kasten and Hans Muth. A trio that had all worked for BMW previously. Their first commission was what would come to be known as the GS650G and the GS550 Katana.

Suzuki however, wanted more, a top of the line Sport’s model based on the GSX1100. Target got to work on the design and created the GSX1100S. It was this that really started the Katana legend and made motorcycle history.

The GSX1100S was first shown at the Cologne show in 1979 as a prototype and the design made quite the splash despite the frame and engine being unchanged from the GSX1100. Suzuki deemed the reaction worthy of putting the bike into production and that they did.

The power plant from the GSX1100 was a four stroke, transverse four cylinder, DOHC, 4 valves per cylinder. It had a displacement of 1074cc and top speed of around 140mph with 100 horsepower to tap into.

It was the first Japanese bike with an aerodynamic, frame-mounted fairing and also the first with proper racing clip-on bars, it completely broke the traditional look of motorcycles up until that point.

The 1100 Katana didn’t sell as well as Suzuki expected, it’s styling became something of a love it or hate it ‘marmite’ situation polarising public opinion. It only lasted in production for most markets until the end of 1981.

However, it had set the precedent for the GS650 and GS550 Katana bikes to run the show, and the GSX750S also had its hold on riders, as well as the later 400’s. The GSX1100S had paved the way for the legacy and the Katana styling would go on to be seen in muted variants throughout many of Suzuki’s motorcycles right up until the present.

A few Mark II 1100 Katanas were produced mainly for the European market in the following years. 1990 saw the first revival of the original 1100 Katana to celebrate Suzuki’s 70th Anniversary. It was built to the 1980 spec and a further 400 were built in 1991.

Later versions were also remanufactured but predominantly for the Japanese market and this continued up until 2001.

So while the GSX1100S at the time may not have sold well, it certainly shaped Japanese motorcycles and the smaller versions went on to sell in their thousands. Perhaps it was just too space-age and like a Star Wars movie prop for some. Regardless, Suzuki remained loyal to the Katana as seen by its various revivals.

Suzuki were the first Japanese company to step outside the box and design something different. Had they not dared to do this, the world may never have seen the likes of today’s Kawasaki H2 or Yamaha’s MT-10.

The desire for an original Katana GSX1100S has increased over the years, helped along by the recent revival of a ‘Big’ Katana. They were a love/hate motorcycle and those that loved them and bought one, have held on to them. They don’t come up for sale often as a result. Certainly not the very first production models anyway from 1980 and 1981.

Rare Sports Bike website had an original Katana for sale with an asking price just over $10,000

I would expect the $10,000 mark to be about the right price for a buyer to pay for one of these machines. However, for this I would also expect some mileage to be on the bike, some modifications and upgrades and I wouldn’t be holding my breath for a completely original Katana.

You could look at picking up one of the revival models from 1990/91. However, these too don’t come up often and are also holding their value, their simply just wasn’t that many GSX1100S bikes made. Specialist importers from Japan for US and European buyers might be the way to go for finding one.

Of course if you want a Katana but are struggling for the ‘big one’ you could look at finding a 650, 550, 750 or even the later model 400’s. It’s not the original big bike or the one that started it all but they are the next best thing.

As with buying an original Katana, restoring one won’t be easy. Lack of parts on the market would make this difficult, not impossible but certainly a project that may take some time to acquire all the components you might need.

The parts I did find certainly don’t come up cheap either:

There does seem to be a replica parts market for the whole Katana line, so that could probably be tapped into for that elusive part that you just can’t find an original for.

Is the Original Katana a Good Investment?

The original Katana GSX1100S is holding its value and has been over the last few years. If you can get a hold of one, you are securing your money in a bike that will continue to be coveted. As with all classic bikes, the older they get, the rarer they become and usually the more they increase in value.

With that said, they still generate a polarising effect on people so while it may remain steady in value, it isn’t likely to sky rocket.

I liked the old katana and I like the new one. Is it mental and a little bit off-beat? Yes and that’s why I love it. This project design could have easily gone South and backfired or Suzuki could have stayed safe and pushed out generic looking UJM’s like their 3 rivals.

Instead they strived to be different but also backed up the quirky styling with their top of the line performance, so I take my hat off to them. They took a risk and it paid off, risks create legends and the original Katana GSX1100S is just that, a legend. 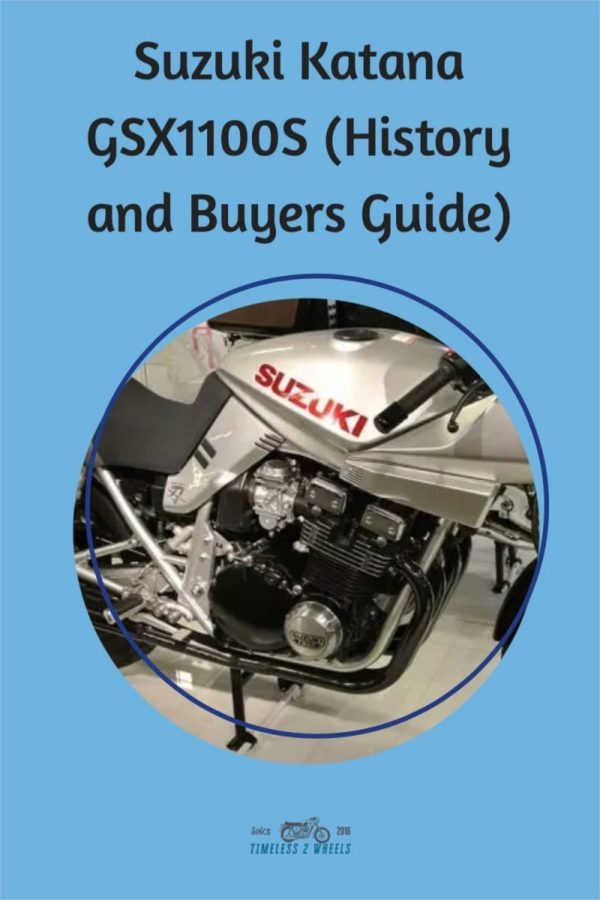