Before the 1980s, an “adventure” bike was simply a lightweight, low-powered enduro bike or one of the heavier desert racers altered for long distance travelling. Neither of these were ideal, but the only thing available on the market during this time for those looking to take on the world. It would be the BMW R80G/S that would change this.

History of the BMW R80G/S

The 1970s was the era the Japanese bikes dominated the market. Newer, faster, more reliable innovative machines were pouring out of the factories of the Far East by the dozen and the rest of the world was struggling to keep up. Having stubbornly stuck to their out-of-date designs, the British manufacturers were heading for financial ruin.

Giving their Motorrad department one last chance to recover, the executives appointed a new management team led by Karl Gerlinger. The Motorrad team realised that in order to compete with the Japanese machinery, their traditional boxer engine needed to be replaced with a new inline-four. This was the start of the four year BMW “K” Series development plan, however Gerlinger, under pressure from above, knew that they needed a “quick fix” to boost sales or risk being shut down.

Shortly after his appointment, Gerlinger toured the BMW Motorrad factory, searching for a prototype that could be put into production to quickly generate revenue, During his tour, Gerlinger was approached by Laszlo Peres, a test engineer, who introduced him to his “Red Devil”.

A larger-than-normal enduro prototype, the Red Devil was a road legal 800 cc boxer-engine motorcycle bike Peres had built for himself in the 1960s to compete in various off-road events in Germany. Peres had previously presented it to the BMW senior management, however with their interests leaning towards road bikes and racing, they shelved the project.

Despite BMW putting a hold to the Red Devils’ development, a few of their engineers, including Peres, continued to work on the bike. A few prototypes were even spotted in the German Off-road Championship.

Gerlinger immediately saw the possibilities for the Red Devil to save the BMW Motorrad department. He assigned engineer Rudiger Gutsche, who had also modified a BMW R75/5 for off-road competition, as the head of the development team.

Time and budget against him, Gutsche went about looking at the existing BMW motorcycle range to see what could be used for the new bike. Using the Red Devil as a design concept, Gutsche decided to use the same R80 engine along with the twin-loop steel frame from the R65 and forks from the R100. Taking a chance with the rear of the bike, Gutsche decided to create something new yet simple. Using a Monolever design, the engineers managed to combine the final drive and rear suspension into a single unit, ultimately lowering the maintenance needs and costs.

Various other changes would befall the new bike including an electronic ignition system, a larger air filter, a 19.5 litre fuel tank and a high mounted two-into-one exhaust.

Prior to the launch, a group of motorcycle journalists were invited for a preview of BMW’s latest bike. Their initial reaction was that of uncertainty, and many were bewildered by what was essentially a pointless heavy enduro bike. It wasn’t until after they had been given the opportunity to ride the bike that they began to realise what BMW had created. The newly named R80G/S (which stood for Gelande/Straße – off-road/road in German) was not designed to take on the low-weight two-stroke Japanese enduros in competition, but was a bike that would do everything from the city commute to a round-the-world expedition. The Adventure Motorcycle had officially been born.

Launched at the 1980 Cologne Motorcycle show, the R80G/S was an immediate success with the public and by the end of 1981 BMW had sold 6,631 R80G/S models, double the amount they had estimated. One in five BMW bikes sold that year were G/S’s, and by the time the R100GS superseded it in 1987, over 21,000 units had been sold. It had truly saved BMW Motorrad.

To date, BMW has sold over half a million GS models.

Believing in the mantra “Win on Sunday, sell on Monday”, meaning those who won in competitions would sell more readily. BMW prepared and entered several works motorcycles (manufacturer prepared machines) into the 1981 Paris-Dakar.

Their efforts were rewarded with Hubert Auriol taking the win nearly three hours ahead of his nearest rival. Teammate Jean-Claude Morellet finished fourth and privateer Bernard Neimer seventh. BMWs effort did not go unnoticed, the public bought into the idea of having their own “Paris-Dakar” adventure and G/S sales increased.

Returning to the Paris-Dakar in 1983, Hubert Auriol once again took victory on his R80G/S. This time the engine capacity had been increased to 980 cc with an output of 70 bhp. The Baja California was the next target on Auriol’s radar, with the R80G/S proving itself again as they took the victory in the 1,200 km desert race.

For the 1984 Paris-Dakar, Auriol missed out on the top spot to BMW teammate Gaston Rahier taking first place. To celebrate their first “one-two” BMW decided to create a limited edition “Dakar” production model.

Back with BMW in 1985, Rahier went on to win the Paris-Dakar again with the R80G/S and its now increased 1000 cc capacity. Victory at the Baja California for Rahier followed shortly after and once more in 1986, this time with Eddy Hau at the helm of the mighty G/S.

Several R80G/S models currently available for sale in a variety of conditions. High quality, early 1990s models are selling for a reasonable £6,000 – £8,000, models from the 1980s are trickier to track down and currently cost around £10,000. If you’re looking for something a little more collectable, one of the 3,000 only Dakar special edition models will cost you £16,000, if you can find one for sale.

Getting spares for any older BMW model is nice and simple. There are thousands of parts available on eBay and BMW themselves still sell brand new parts for their older machines, albeit at modern BMW prices.

Does the R80G/S make a good investment?

At an all-time high, the popularity of BMW’s flagship adventure bike has been the best-selling adventure motorcycle for the past 20 years in a row. Quite simply, you won’t lose money if you invest in an earlier model.

The R80G/S is a special bike for me. It created the Adventure bike niche I find myself part of and contribute to as part of my normal life. That Peres originally built it as a passion project feels very relevant to what adventure riders do these days, changing and adding parts to create the perfect travel machine for them.

There is a well-known R80G/S called “Libby” within the adventure motorcycling community. In 1991, Libby took explorer and friend Sam Manicom across 5 continents, 55 countries and 200,000 miles over 8 years. He still rides her to this day with 278,000 miles on the clock.

The R80G/S was the predecessor of the R1150GSA, that bike from the Long Way Round, which brought adventure motorcycling to the world and exploded in the market from that moment onwards. If I was to invest into the GS series, it would be the R1150GS rather than the R80G/S, it was the bike that sparked my sense of adventure and unlocked my heart to travel the world. 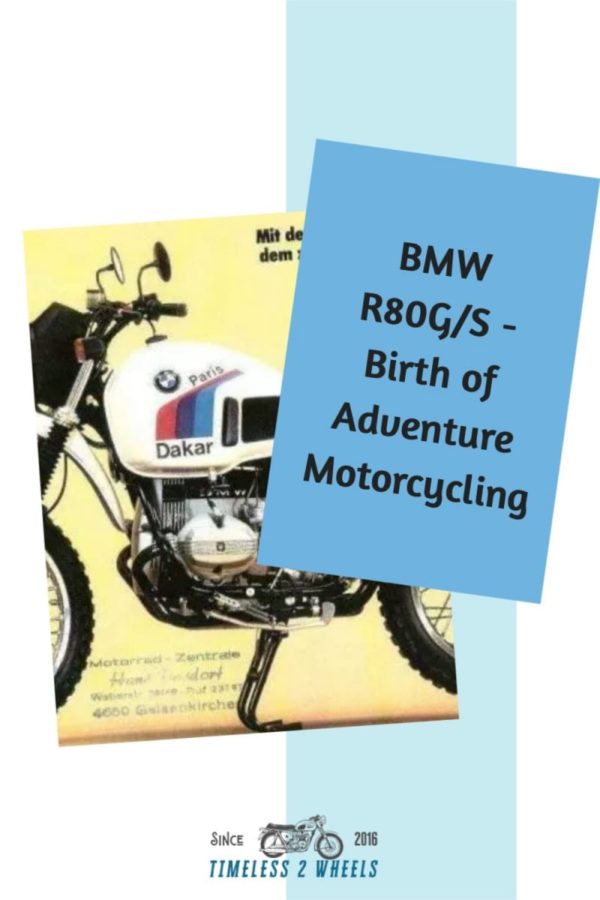 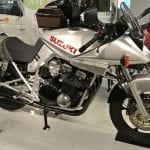