The Ducati 748 is an interesting motorcycle because it can be argued that the Desmodromic system which went on to dominate Ducati’s race story all started with a prototype 750 which was then bored up to be the Ducati 851.

The 748 was pretty much designed years before the Ducati 916 but it wouldn’t go into production until one year after the bigger bikes release.

It is perhaps the bike that started it all for Ducati on the track so let’s look at this important Ducati bike story.

History of the Ducati 748

The very first Desmo-Quattro engine was the Ducati 748, based on what was the top of the line Ducati engine at the time, the 750cc Pantah engine.

Chief Engineer Massimo Bordi is credited with the development of the engine which by 1987 was released as the Ducati 851. The 851 was a bored out version of the 750cc engine.

A prototype model (that had no name) used the 750cc Pantah engine. It raced in the 1986 Bol d’Or endurance race and in 1987 the prototype would win the Battle of the Twins race at Daytona.

While these prototypes were built as a pretence for the 851 model, the capability of the Desmo-Quattro engine was clear in the 750cc version. Little did anyone know in that moment, that Ducati would later revert back to the original engine size for the release of the Ducati 748.

The 851 won many World Superbike Championships up until 1993 when the Ducati 916 took over the winning streak which was upgraded from the 851 and not just in engine capacity.

It was 1994 before Ducati revisited the idea of a 750cc version and it was intended not just for another race category but to give riders a completely different experience from the bigger Ducati 916.

The frame, brakes and suspension were nearly identical to the 916 and the overall power output was not all that different either with the 748 delivering a claimed 98HP and the 916 just 11 HP more.

The main differences came from minor changes such as smaller tires. The handling of the 748 was markedly better than the 916.

The more highly tuned 748 engine had to be revved higher to achieve maximum output which gave the rider a completely different feel and some said more involved riding experience.

The bike delivered 75Nm of torque which came out of its 748cc, 90-degree V-Twin, paired to a six-speed manual transmission.

The standard Biposta model came with a full-fairing (inclusive of a windshield), cast-aluminium wheels, dual seat, Brembo brakes, a 43mm fully-adjustable upside down fork, and monoshock in the rear, as well as an under-seat exhaust system.

Until the model was taken over by the 749 in 2003, there were various sub-models added to the 748 most of which had performance based upgrades, to make the bike sportier and more race worthy. For example it was 1995 when the 748SP was released in that memorable yellow paint scheme and that had a massive maximum power output of 105HP.

The Ducati 748 was received well by the press and public alike, with riders noticing the better handling than the bigger 916 above all else.

It was somewhat more affordable but with very little compromise on power. Ducati had a winner and they knew it.

In 1995 the Ducati 748SP won the 600 Supersport class of the World Superbike Championship with Michael Paquay riding. Frazrizio Pirovana won it again in 1996.

Paolo Casoli would see another victory in 1997 for the Supersport World Cup.

The race wins certainly highlighted the capability of the Ducati 748 to the public and by now all manufacturers knew that being present in racing equated to increased bike sales.

The bike was popular and race versions increased its popularity.

Choosing a Ducati 748 For Sale

The Ducati 748 is not the most popular Ducati on the market with many favouring the bigger 916. However, what that means is that Ducati 748’s do come up for sale and are not too hard to find. Many of the adverts I browsed through were of bikes in great condition, with reasonably low miles.

Most Ducati’s of the era are looked after by their owners, but as with the 851 Ducati’s reliability (particularly with the early models) was not up to scratch.

So, it is likely you will find modifications and improvements having been done by owners, which for the purists may mean the bike won’t be 100% original. You may want to clarify any upgrades before purchase.

In the UK prices also vary with Car and Classic having several models listed priced from £5,000-£12,495.

The best advice for buying a Ducati 748 is to be clear on the model year you want so that it matches the slight spec changes made over the years and where you can get as much history on the bike as possible so you are aware of any faults that may rear their head in the future.

Other things to look out for are:

Parts for the Ducati 748 are not hard to get hold of and it shouldn’t be a struggle to find what you need to put your perfect 748 together. There is both a good original parts and replica parts market.

Here are some price examples from eBay:

Parts aren’t on the cheap end of the spectrum but they also aren’t as expensive as other Ducati models. You could likely find a project bike for the $5,000 mark and spend $2,000 on it to get it back to good condition.

Check out the 748 section at the Ducati Forum for plenty of advice and help finding parts.

Is a Ducati 748 a Good Investment?

Investing in any Ducati from the era of sports bike domination cannot be a bad decision but choose your model wisely and as original as possible.

Keep it well maintained and should you so desire to sell it in a few years you will likely see a reasonable profit. As the time goes on the Ducati 748 is slowly getting harder to get hold of and anything that becomes harder to find generally gets more coveted by collectors.

That is the financial side of an investment. Let’s discuss the fun side. Buy one, ride it, love it, let it break (maybe) then fix it and ride it some more.

Compared to the 851 and 916, the Ducati 748 is cheaper to get hold of but just as much fun to ride for most road conditions.

Despite what some some people think, the Ducati 748 is not a small 916 and neither does it really pretend to be either. The Ducati 748 stands alone in it’s own right as a pretty cool, pretty quick motorcycle, with very nice handling.

It laid the foundation for the success of the 851 in it’s prototype version and the 916 reminded Ducati that a 748 version should go into production to meet rider demand; so for that I think it deserves some respect. 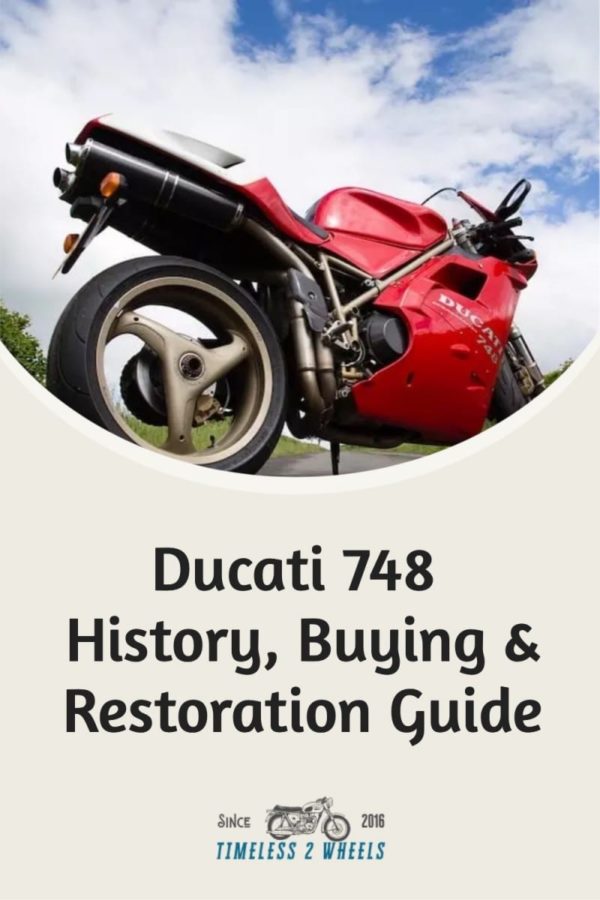