The Norton Classic Rotary is likely the rarest Norton ever to have existed, and certainly the rarest to find today for collectors. The bike is highly coveted for motorcycle historians and collectors, the reason being is it’s rotary Wankel engine.

With only 100 ever produced, the backstory is fascinating and while it didn’t take off, the Norton Rotary motorcycle was an attempt at something different and that is where it deserves acknowledgement. Getting its start in the height of the 1970’s demise of British motorcycle manufacturers, let’s find out where the bike came from.

History of the Norton Rotary Engine

British manufacturers were struggling in the 1970’s to keep their heads above water. Norton had merged with BSA in 1973 just as BSA was on the verge of collapsing, and as they did, all assets were surrendered to Norton.

Among the claimed assets was an engineering project that had running prototypes for a twin-rotor Wankel engine powered motorcycle. It was crazy, it was different, and Norton thought it was worth developing further and giving it a go.

Felix Wankel was a German engineer who developed a type of internal combustion engine that uses a rotary design to convert pressure into rotating motion.

Wankel completed his first design of a rotary-piston engine in 1954, and the first unit was tested in 1957. He paired with NSU, a leading German motorcycle company to test the new engine design. By 1959, over 100 companies around the world were hankering after Wankel’s rotary engine to use in their vehicles.

Hercules produced the W2000 using a single rotary engine, which would spark the process for Norton’s bash at Wankel rotary engines. Suzuki would also give a rotary engine a go in one of their bikes. Mazda is known for developing the Wankel engine into a practical motor for vehicle use and is credited with combating many of the early design flaws.

Norton engineers led by David Garside developed the Wankel rotary engine that would be used for the Norton Classic, his first attempt was a bike using the single-rotor Fichtel and Sachs engine from Hercules.

During the development starting back in the 1970’s of the rotary engine based Norton bikes, it was clear at the time the Japanese marques were producing better bikes. They were fast, technically superior, reliable, and easy to maintain, all at an affordable price point.

British bikes were feeling stale, expensive and were struggling to get any more power out of their engines. Since the demise of the Norton Commando in 77, the company had been looking for something to set them apart from their competitors.

The biggest debate among the British manufacturers at the time was overhead cam vs pushrod, so Garside and his team of Norton engineers decided to bypass that and shift to Wankel rotary engines.

The first rotary powered motorcycle for Norton was built in 1983-1988 and was designated for police use only. The idea was the 350, 588cc Interpol 2 or ‘P41’ prototypes would be tested under the brutal conditions of everyday police work.

They were rolled out to several police forces across England. They were also available to the military police forces including the Royal Air Force police. Sales were restricted on the Interpol 2 due to the rotary engine requiring a strict maintenance schedule.

Also the bike needed riders who would be conscious of the temperature gauge. The air cooled rotary engine had a tendency to overheat. Other problems with the engines were evident early on, they suffered from poor idling and rotor seals that would blow.

Norton was struggling for survival themselves and it was in 1987 after a change of ownership the new rotary designed motorcycle was ready for production. Enter the Norton Classic (P43).

It used the same basis of the Interpol 2 with the transverse layout, air-cooled engine, and two Fichtel and Sachs rotors. It had a unique internal cooling system, a capacity of 588cc and produced 79hp at 9,000rpm.

The big difference for the civilian Norton Classic was a more naked look. The fairing used on the Interpol 2 was left off. There was only one other Wankel competitor and that was the Suzuki RE-5 water-cooled single rotor bike, which was much heavier than the Norton Classic.

The telescopic front forks were conventional as was the rear suspension with a traditional swing arm and two shock absorbers. Other than the engine, the bike was very much traditionally styled in the British way for the time.

Despite the promise of the Norton Classic, the company didn’t have the capital to back the project as fully as they would have liked and so only 100 Wankel powered Classics were ever produced. Lack of and poor marketing meant consumers at the time weren’t even aware they were available, Norton dealers struggled to shift them.

Largely the 100 bikes that did sell went to Norton enthusiasts and collectors.

The Norton Classic rotary engine was plagued by overheating despite the designers best efforts to eliminate the issue. Water-cooling would have been a saviour but the bike was lightweight and had been designed as an air-cooled from the get go, so a combination of stubborness and lack of capital meant Norton had to do they best they could.

The result was a large filtered air intake under the steering head, it grabbed lots of air, aimed it between the rotor housings, running through the interior of the rotors taking some of their heat, before being drawn out by the monocoque frame, the carbs would then draw this filtered air into the engine.

It was an an honourable attempt but the Wankel rotary engine still ran hot and there was very little that could be done to solve the problem.

Lubrication of the rotor seals was also an issue and the design of the oil injection system left mist in the combustion chambers which subsequently burnt. Burning oil was no good for emissions, so the bike had a limited lifespan as a consumer product regardless of any other issues.

Norton continued with the rotary powered motorcycle idea in the form of a later (1988-1994) RCW588 racing bike which was water-cooled. A street version followed in the form of the F1 which came in black with gold details, John Player Special livery, with JPS on the tank. The British cigarette company was sponsoring Norton in their GP racing efforts at the time.

After this Norton left the rotary engines behind.

Rotary engines generally never caught on with motorcycle manufacturers despite on paper being perfect for motorcycle use. They are lightweight and mechanically very simple. A big part of why they didn’t gain much traction is they didn’t receive the investment into their development in the same way the piston-based internal combustion engine received.

Much like gold dust the Norton Classic isn’t easy to find. Bonhams sold the one above (numbered 92) at auction in December 2020 for £12,075 but haven’t had any up for auction since.

If you are looking for a Norton Classic I would recommend contacting Bonhams to see if they have any coming up for auction.

The Norton Owners Club would also be a good port of call to ask around for any likelihood of a Norton Classic for sale.

At the time of writing I could only find one Norton Classic P43 for sale and that was at Cosmo Classic down in Hastings, East Sussex. The asking price is £12,500.

Restoring a Norton Classic is going to be just as difficult as finding one in the first place. Parts are not readily available and are as scarce as the bikes themselves.

Is The Norton Classic Rotary a Good Investment?

A Norton Classic would be a great investment, they are highly collectible and desired by Norton enthusiasts worldwide. However, they are not the most coveted classic model, so while extremely rare due to their low production numbers, they do not fetch ridiculous prices on the market.

My best guess would be that if you got your hands on a Norton Classic and looked after it, you would never lose money but it is unlikely to become a treasure chest down the road either.

The Norton Classic is best left for someone who will love it for what it is, a British classic and a moment in time, something only 99 other owners would have and a real museum worthy piece of machinery.

Getting to look into the rotary powered bike has been super interesting. At a time when British motorcycles were stagnant and companies struggling, Norton were still pushing to be innovative.

Who knows where the industry would be as a whole if rotary powered motorcycles had an increased amount of investment at the time, and further to that, who knows how far Norton would have got as one of the leaders of the development of these bikes? 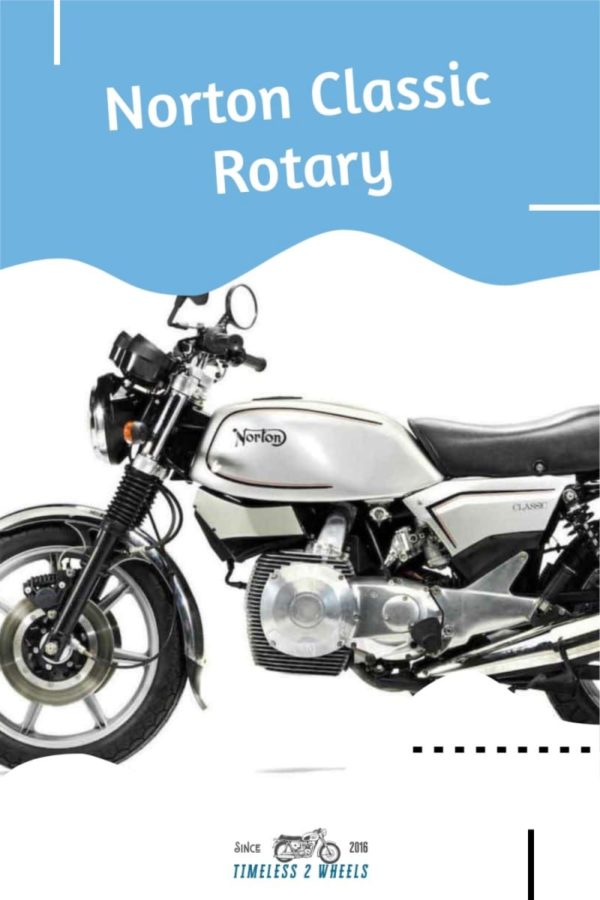