It is 1989 in Germany, the Berlin Wall has crashed down to the ground and BMW decided to produce the craziest motorcycle they had designed to date, the K1.

It was a bold, futuristic design that reminded everyone why BMW was such a giant in the motorcycle industry.

Without further ado, let’s take a look at how it all started and how it was received.

History of the BMW K1

To understand how the BMW K1 came to be, we first need to step back in time a little bit to the introduction of the K series.

Traditionally the BMW Boxer engine could be traced back to the 1920’s and it had served the company well, proving it’s worth over its various evolutions and being the foundation of the best motorcycles for the war efforts; leading to both Harley Davidson and Indian replicating the design for their wartime machine efforts.

The later three and four-cylinder engines didn’t follow convention either and when the 1983 BMW K100 was introduced, with a four-cylinder engine mounted longitudinally rather than transversely like the Japanese offerings, BMW stuck it’s tongue out at ‘normal’ and the cylinder heads poked out the side.

The K100 earned its nickname as the ‘brick’ as a result. However, BMW was not deterred, their ultimate plan was to shake off the reputation as being old time air-cooled engines and bring in the liquid cooled K series and dominate the field.

It was a radical plan especially as the boxer engines has served the company so well.

So they kept working on the K series and ready for production in late 1988-89 the K1 was lined up. It had a fully enclosed fairing made up of seven pieces, with even a section covering half of the front wheel. Using car manufacturing technology BMW claimed the K1 to have no competition when it came to aerodynamic performance and less drag than any of their rivals.

It was bright red, black details with yellow highlights (a nod to the German flag) so BMW weren’t being shy about their latest model. For the U.S market an equally bright blue was later adopted for the livery.

It had a top speed of 150mph and was incredibly stable being built for those fast autobahn rides.

The K100 was the base for the new K1 but it was more than just a few tweaks to complete the design it was a whole redevelopment with upgrades at every opportunity.

Brembo brakes were fitted, Marzocchi forks, 17” front wheel, 18” on the back, and taken off the GS model the revolutionary Paralever drive shaft.

The K1 weighed in at over 600lbs when fully loaded which made for a pretty heavy motorcycle, however the long wheelbase and design meant the weight was carried low and balanced fairly well.

ABS and 16 Valves were only two of the design features that took other manufacturers nearly a decade to implement into their machines. The bike was too heavy really for a racing style sports bike and it was more aimed as a sports tourer which wasn’t quite a thing yet and therefore the masses were confused about where it fitted in.

Kawasaki’s ZZR1100, Honda’s Blackbird and Suzuki’s Hayabusa all became classics of the 90’s and defined the sports tourer genre, it was perhaps the only failing of the K1 that it was born too early and the world just wasn’t quite ready.

The BMW K1 was plastered across the motorcycle magazine giants upon it’s release with Rider, Motorcyclist and Cycle World among others all featuring the bike on their front covers. It was met with excitement and given appropriate accolades for its innovation in terms of both design and advanced technology.

Cycle World in August 1989 stated that “the K1 possesses a mid-range power punch that seems as strong and smooth as that of a Hurricane 1000.”

BMW’s intention was never about the race track, it was about evolution into a modern engine and to provide a sports bike for the road, so dyno testing and competing with Japanese sportsbikes just wasn’t important.

While it wasn’t a priority for BMW, consumers were obsessed with speed and performance and that’s where the K1 fell short when compared to bikes like the Kawasaki ZX-10.

For the U.S market introduction in 1990 the K1 cost around $13,000 which equates to over $26,000 in today’s terms, so there were few riders that could afford that price tag especially with Japanese alternatives readily available at a fraction of the cost.

The price combined with the uncertainty of the BMW K1’s place in the bike world led to relatively poor sales, despite its acclaim from the motorcycle press.

Less that 7,000 bikes were sold so while the K1 wasn’t a big consumer hit, what it did do was make it known that BMW was here, modern, advanced and ready for a new era of motorcycles.

Today the biggest issue you will come across when trying to buy a BMW K1 is the rarity of which they come on the market. The upside however, is they are very affordable and will be sure to offer many thousands of riding miles for the investment.

You can buy a BMW K1 for anything from £3,500 to £9,000 in the U.K. Showroom condition models can be found for sale at higher prices but currently seem a little over priced for the current market value.

There are parts available for the BMW K1 but the market is not flooded with them, so you may have to search a while and bide your time to find what you need. Also remember the K1 is a BMW and as always there is BMW premium attached.

Some examples off eBay Us are as follows:

Is a BMW K1 a Good Investment?

The BMW K1 modernized BMW and was the sports tourer before people knew what a sports tourer was. It is a future classic and worthy of the ‘classic’ title.

I think value will likely increase as more time passes but the BMW K1 will never be the motorcycle that makes a fortune on your investment as even to this day it is still misunderstood by many riders.

However, if you want a motorcycle that will crunch the miles, be reliable, that has ABS and other ‘modern’ features without the excessive electronics that are found on new bikes, the BMW K1 might just be for you. It will provide many happy miles and is sure to gain a lot of attention along the way.

If you have read my other articles you will know that the classic bikes that are the most quirky are my favourite and the BMW K1 definitely falls into that category. It’s got a kind of 90’s Power Ranger vibe that I’m into.

BMW these days are mostly associated with the touring GS series and while they are great for what they are built to do, (let’s not discuss the GS owners who have next to nothing miles on the things, but have all the gear) they are not as exciting as the K1 with its fiery livery and monster design, with the tech to match.

So, I lay down another gauntlet and challenge BMW to push the design team once more, and create something equally innovative for today’s market, we know you have it in you. 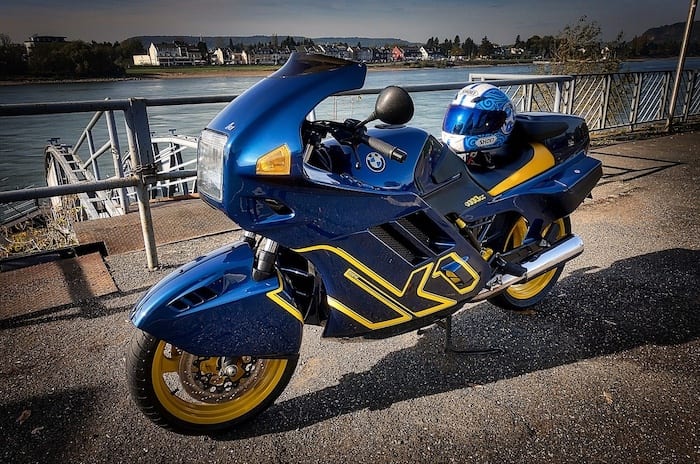 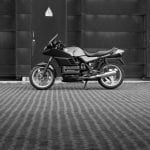 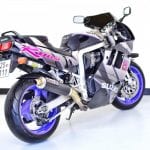