In 1986, a year after a thankful few got their hands on the fantastic GSX-R750, it was topped by the bigger and faster Suzuki GSXR 1100. More power from the larger 1052cc engine but like the GSX-R 750 it had the aluminium cradle frame, fairing, full floater rear swing arm and an air cooled four stroke inline four engine.

The new Gixer had a claimed top speed of 155 mph (250 km/h) and produced 125bhp. Together with its low weight, short wheelbase and proven chassis, the Suzuki GSXR 1100 was the new weapon of choice for wanna be road warriors of the 80s.

So let’s take an in depth look at the big GSXR 1100, starting with how it came to be.

History of the Suzuki GSX-R

Often the iconic Suzuki GSX R750 is recognised as the first of the GSX-R’s. However, the now infamous line got its start in a Japan-only model that was a 398cc machine. It was the pioneer of the alloy frame and four cylinder layout that the GSX R750 would later bring to global attention.

The slab-sided styling, double headlights, and lightweight cradle frame were all present in the Japan-only 400 model and it was these trademarks that in 1985 the GSX R750 carried forward into the limelight.

The alloy frame made the Suzuki GSX R significantly lighter than other steel framed ‘superbikes’ of the time, it was this combined with the SACS – Suzuki Advanced Cooling System (oil cooled) engine that made the GSX R750 stand out from the crowd. Suzuki knew they had a hit with the 750 and the only next logical step was to up the capacity and make a true ‘big’ motorcycle.

The motorcycle had a wet multi-plate, hydraulic-operated clutch with a 5-speed transmission and electric start and it came with duel four piston calipers. The 1100’s wet weight was 253kg and it had a top speed of 160mph doing 0-100 in 3.3 seconds (1990 model).

The Suzuki GSXR 1100 was the first road bike to have a cartridge fork setup and electronically activated suspension. Suzuki’s aim with the 1100 as with the 750 beforehand was to use race bike technology in road bikes and create the best sportsbikes for the time.

Let’s see how the bike performed when it was released and how it developed.

The Suzuki GSXR 1100 came before the Honda CB900RR Fireblade and other Supersports (which shifted the entire standard of what was expected for sportsbikes) and the bike was met with a welcoming reception, praised for its power, handling and lack of weight.

As fast as the GSX R750 was, the 1100 was bigger, and for 1980s riders an engine over 1000cc gave you maximum street cred so it generated huge excitement amongst the biker public.

Suzuki would come to make various adjustments to the model over its production years with particular attention paid to frame geometry in an attempt to make the bike handle better. This would lead to different model years having different characteristics, so one owner would claim excellent handling and another would say the bike felt unstable.

The early motorcycles were lighter and the frame would sometimes warp under extreme stress, whereas the later models would be more rigid but heavier contradicting the original revelation of a lighter frame.

In 1989 the K model was introduced. Known as the Slingshot 1100K, it had a larger 1127cc engine and a new frame which had proved a popular and successful upgrade in the 1988 GSX-R750J model.

The new engine was a success but the shorter and stiffer frame gained a reputation as being hard to handle. This wasn’t helped after the GSXR 1100 was banned from the Isle of Man TT races following the crash and death of Suzuki team racer Phil Mellor and another crash by Jamie Whitham.

The new 1127cc engine proved popular with privateers and continued with all models until 1993 while the frame issues were resolved with the L model released in 1990.

The 1993 shift to a water cooled engine allowed for a significant increase in power and in 1995 the GSXR 1100 received a race-style braced swing arm and a reduction in weight.

Suzuki somewhat overshadowed the GSXR 1100 with the continued success of the 750. In particular the 1996 release of the GSX-R750 WT which was super lightweight and a true return to a race style road bike.

Suzuki would tweak the model right up until 1998 when production ended for the GSXR 1100 and it would later be replaced by the GSX R1000.

Then and now the Suzuki GSXR 1100 remains a tuners favourite machine with owners tinkering and fixing up their rides to get the absolute most out of them. They really are bikes that got rode hard and that has to be a credit to Suzuki’s initial concept of giving the masses a race-worthy road bike. For many it’s considered the peoples motorcycle.

To get your hands on a good example of this modern classic Suzuki you can expect to pay an average price of £5,000 in the U.K with the price range from £2,500-£7,000 depending on model, year, mileage etc.

Early mint models like the one below can fetch around £10k.

Auto trader has a 1992 GSXR 1100 advertised with just over 9000 miles on it for £5650 and it is a very clean motorcycle with lower mileage than others currently available.

The pure fun and joy of these GSX R’s mean that owners have ridden them (until they sell them for something a bit more sensible, or should I say comfortable?).

A lot of the GSX R1100’s on the market will have been tested to their capabilities and will not be pristine and loyally looked after like other classic motorcycles, as it just wasn’t why they were built.

With that said mechanically the bikes are sound and had very few reported problems gaining a reputation for reliability:

There are far more Suzuki GSXR 1100’s looking the worse for wear than there are those in immaculate condition.

Original stock exhausts and early model bodywork is getting harder to find for replacement parts. Although with a little time and patience it is still possible to find everything you need to restore GSX R1100 back to its former glory.

For American restorers you may well need to shop for your parts in the UK, Germany and Japan as parts seem rare your side of the pond.

Making a list of what is needed and getting it all off one seller, to pay one shipment fee would be a good way to avoid extra costs out of your budget.

Example prices of parts from eBay in both GBP and USD:

Is a Suzuki GSXR 1100 a Good Investment?

If you are looking to invest in a motorcycle to turn a profit, the GSX R1100 isn’t the one for you. Prices shot up a few years ago so that ship has sailed.

However, if you are looking for ‘old school’ cool, with heaps of power and true sports ergonomics to blast around on, then these are the motorcycles for you. It may well give you a bad back after 30 miles but it will keep you smiling all day.

Find the right one that is mechanically sound, ride it, enjoy it and you will be more than capable of keeping up with your mates on their modern day sportsbikes. When its time to pass it on to a new owner you certainly won’t lose money on it.

I haven’t got the strength to wrestle with the big GSX R or a healthy back to withstand the rugged and sporty ergonomics. However, that doesn’t stop me appreciating the Suzuki GSXR 1100 and pining after one.

There will always be something cool about motorcycles that puts up a bit of a fight, man vs machine. It’s not the sexiest sports bike, but it has an edge and solid engineering to back it up.

I’d like one just to test my tuning skills, then I’d sell it again for someone else to have a go. 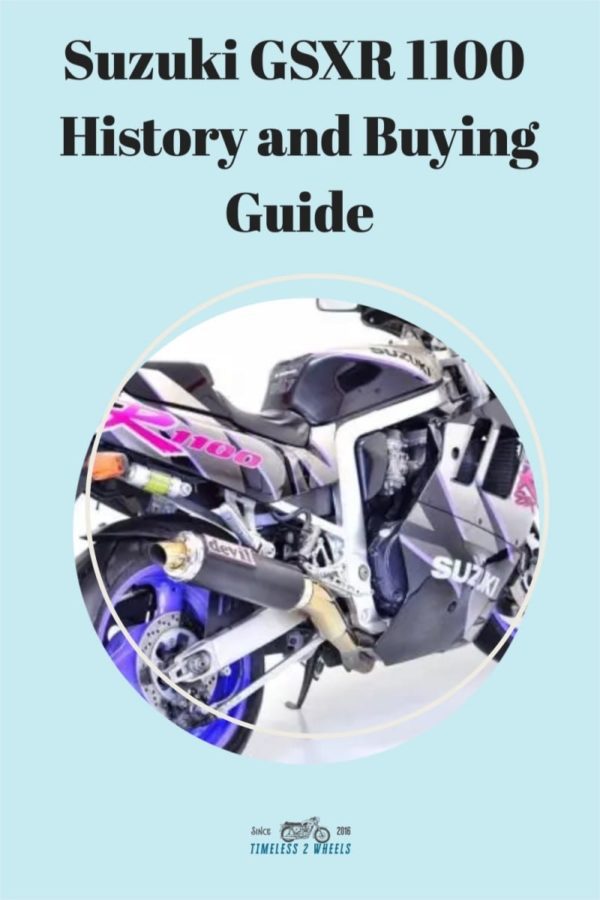 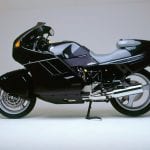 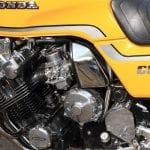