Are Choppers Out Of Style?

It doesn’t seem so long ago when you couldn’t drive two blocks without seeing someone on the sidewalk with an “Orange County Choppers” T-shirt or a “West Coast Choppers” sticker on the back window of a pickup truck. But something happened, and both the t-shirts and the candy-paint-and-chrome bikes themselves seem to have all but disappeared…

But are Choppers out of style?

Yes, absolutely. The days of the $100,000 custom chopper have come and gone. Praise be to the most high.

For the most part the retro-cool crowd has moved on to scramblers, cafe racers, and bobbers to get their fix for classic style and attitude. But there’s a difference between the choppers of excess built for celebrities with bottomless budgets and the chopper itself as a style icon.

And while I can’t agree that layering dark sunglasses over a bandana was ever stylish, let’s talk about what put choppers themselves out of style and out of business.

Who Killed The Chopper Scene?

To be fair, even the original West Coast Choppers brand started out of founder Jesse James’ mom’s garage, and it was mainly a screen-printing business that built bikes on the side.

That was back in 1992, and it took a long time for the grassroots garage builds to grow into the wildly expensive and unique “what will they think of next” bikes that started popping up on reality TV shows.

There’s no doubt that Jesse James earned his success, a self-described “glorified welder” that stumbled into the spotlight and paved the way for similar “bike build-off” programming to take over the airwaves.

And in a sense, all that business is exactly what put choppers out of commission.

Seeing the public’s reaction to the “cult of cool” built around the West Coast Choppers brand, marketing wizards and television executives went to work looking for bike builders that were interested in some lucrative work.

Before you knew it, no new product launch, feature film, or video game marketing campaign was complete until it had a custom themed chopper to go along with it.

The public ate it up, and for the next five years, a dark cloud hung over the motorcycle world.

It was the dawn of the commercial custom chopper era. They couldn’t print the T-shirts fast enough.

The Great Bike Builder Sell-Out Of 2002

Like your favorite doom-metal album that no one had heard of five years ago, choppers became mainstream, which went entirely against everything that choppers themselves should represent.

A chopper should be a handmade death-machine, plain and simple.

If they’re street legal it better be by accident.

They’re built by back-yard enthusiasts with Sawzalls and MIG welders, and they’re by no means intended to be safe, reliable, or expensive.

But they are intended to be stylish, unique, and custom.

What the reality show chopper scene did to the term “custom” is pretty much unforgivable.

Essentially, the folks at Orange County Choppers would pick a new corporate sponsor every week, and build them the same stretched, chromed, loud heap of wide-tire trash. When this was done, they’d go back and find a creative way to incorporate a company logo onto the bike.

It was “chopper marketing,” not chopper building.

And just in case your memory is a little fuzzy on this topic, here’s a list of some of the “wild hog” organizations that got their names painted onto their very own Orange County Chopper:

Guerilla marketing tools built to be parked on convention center floors and ogled by a bunch of people in suits who could afford them but would never buy one, and by people who actually thought they were cool but would have to refinance their home to make a downpayment on one.

As Jesse James would say, “Pay up, sucker.”

And who could fault him there. Strike while the iron is hot. The man did what he loved.

Then, sometime around 2010, the world realized that the only people who were buying bikes like these were celebrities, lawyers, and dentists, and nothing drives a nail in the coffin of cool like seeing a corporate executive throw on a bandanna and take his $100,000 motorcycle out for a bike night at the local Cheesecake Factory.

Slowly but surely, the public decided the “chopper” gimmick was played out, and the hearts and minds of viewers moved on to… Duck Dynasty, I guess.

Could Choppers Make A Come Back?

In a sense, the real choppers never really left. You just never saw them on TV.

The chopper scene was rooted on the West Coast, from the biker gangs of the Bay Area like the Hell’s Angels to the Kustom Kulture scene around Long Beach, CA.

There’s still a huge cult following around the “built-not-bought” classic chopper ascetic out West, and young adult enthusiasts are buying up whatever crusty old Panheads and Knuckleheads they can get their hands on and breathing new life into them.

It will never reach the heights of the chopper-craze of the 2000’s, but honestly that’s how chopper lovers want it. Keep it small. Keep it authentic. These bikes are all passion projects.

And the hand-built chopper mindset is still alive and well in a few key garages around the world as well.

Jeff Wright’s Church Of Choppers in Van Meter, Iowa cranks out some of the coolest custom bikes in the world, and (thankfully) none of them even vaguely resemble something you’d see on the Discovery Channel.

Just a few examples of the greasy-hands/bloody knuckles builders that are keeping the privateer soul of the chopper scene alive.

What are the most popular bikes to turn into Choppers?

By far, the two most common bikes to chop back in the day were the Harley Davidson Sportster (which has been in production since 1957) and the Triumph Bonneville (which has been produced in spurts since 1959).

The Honda CB750 was also a popular alternative, and as an added bonus, it ran reliably and didn’t constantly leak oil.

What makes a motorcycle a “Chopper?”

Depends on who you ask. Long before Peter Fonda and Dennis Hopper hit the road in 1969’s Easy Rider, chopper culture was already alive and well.

The term “chopper” came from motorcycle owners “chopping” every non-essential part they could off their motorcycles to make them as light and fast as possible, often with little to no regard for safety.

So broadly, any cruiser-style bike that’s been stripped down in the name of fast-and-loud can eat at the chopper table.

However, what most folks expect to see when they hear “chopper” are stretched front forks (probably in a raked frame), a large-displacement V-Twin engine, and a rigid or “hardtail” rear end with no suspension.

Loud, open exhausts (typically pointed at the sky) and the tallest sissy-bar you can weld onto the back end should also score you some chopper clout. 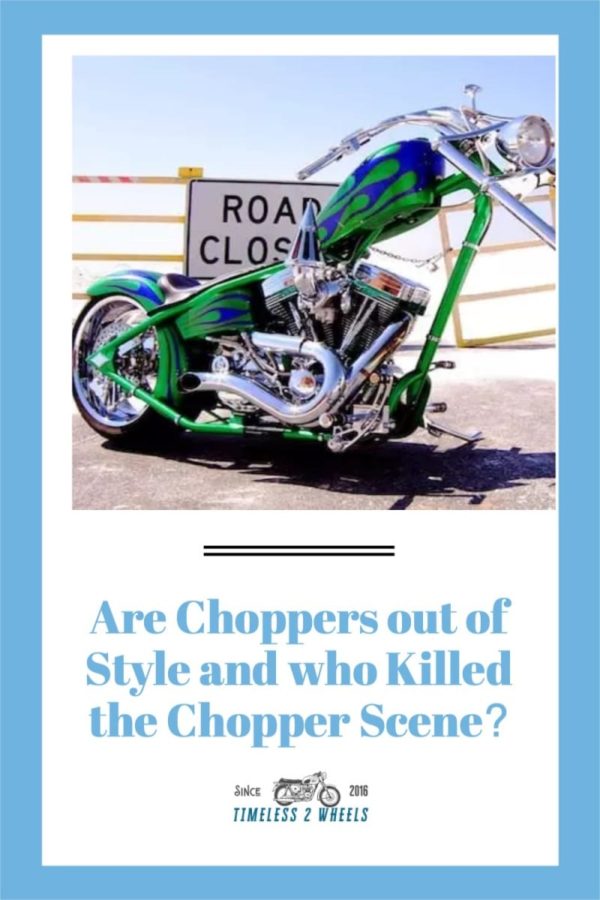 Motorcycle Mechanic School – Your Road to Being a Bike Mechanic 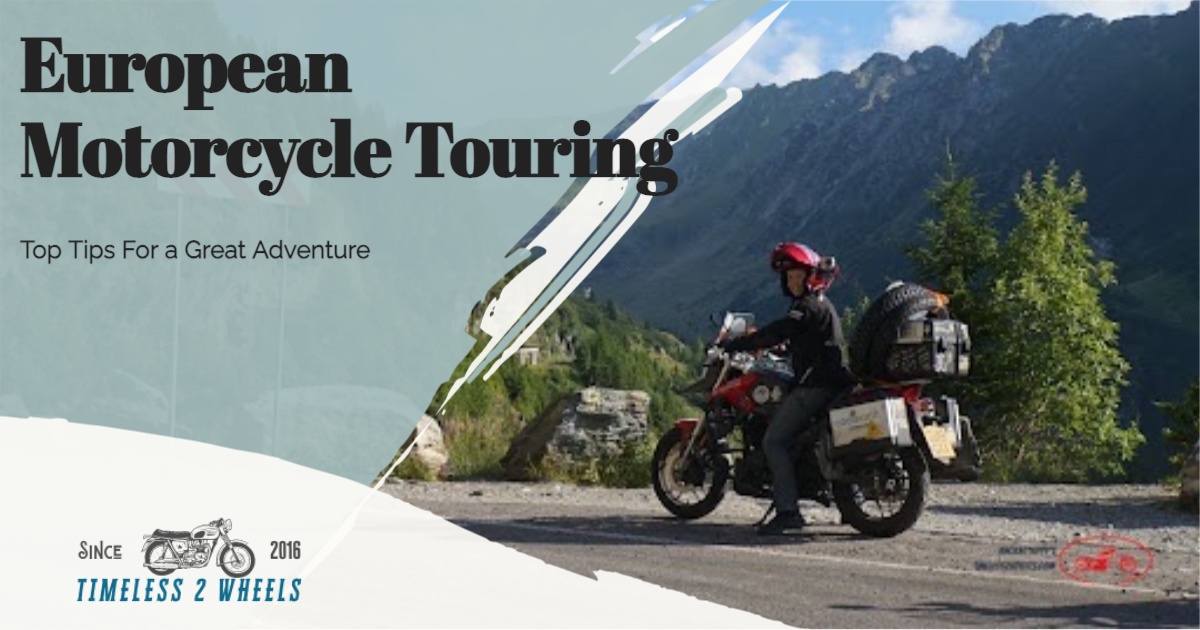 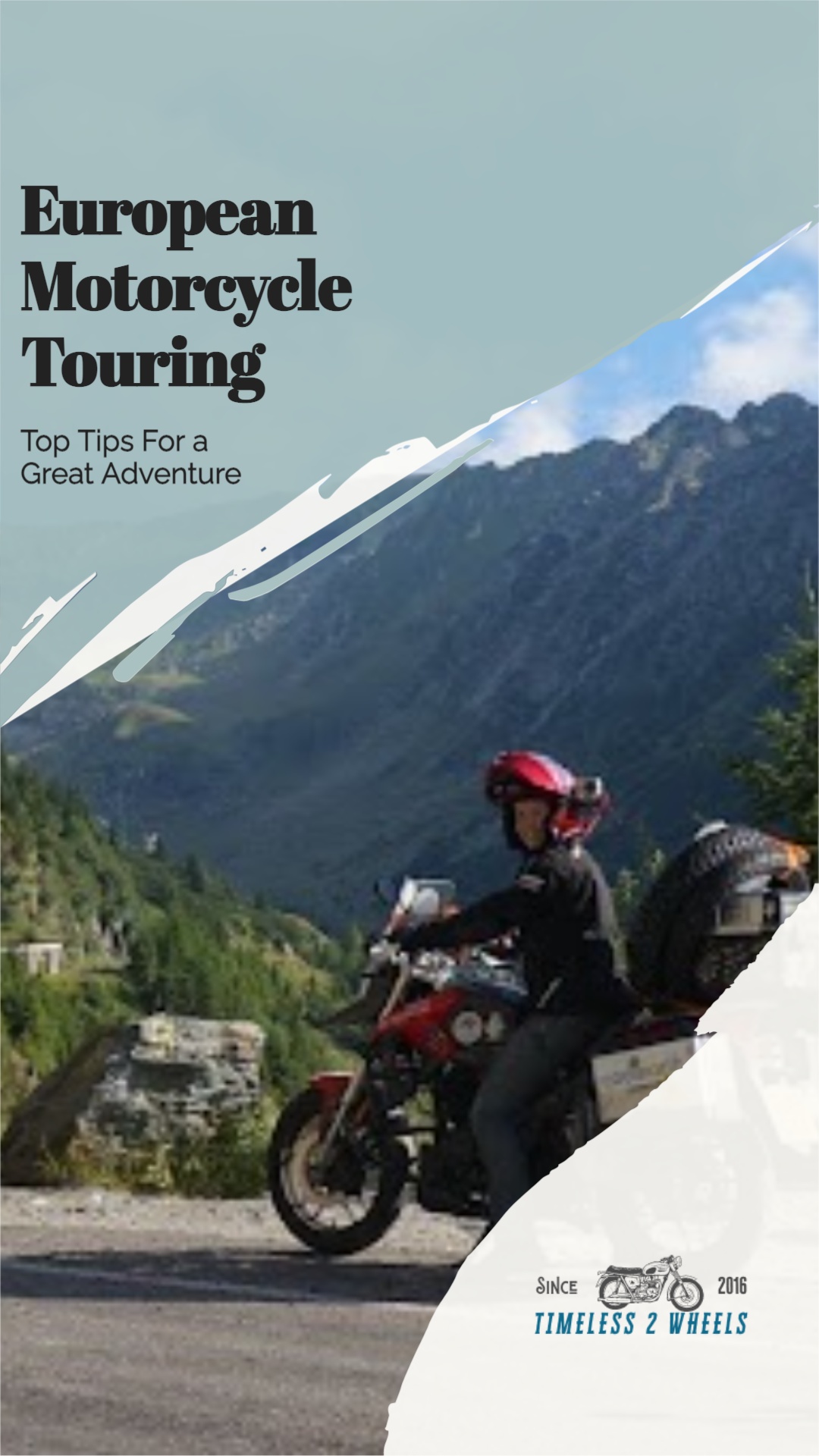 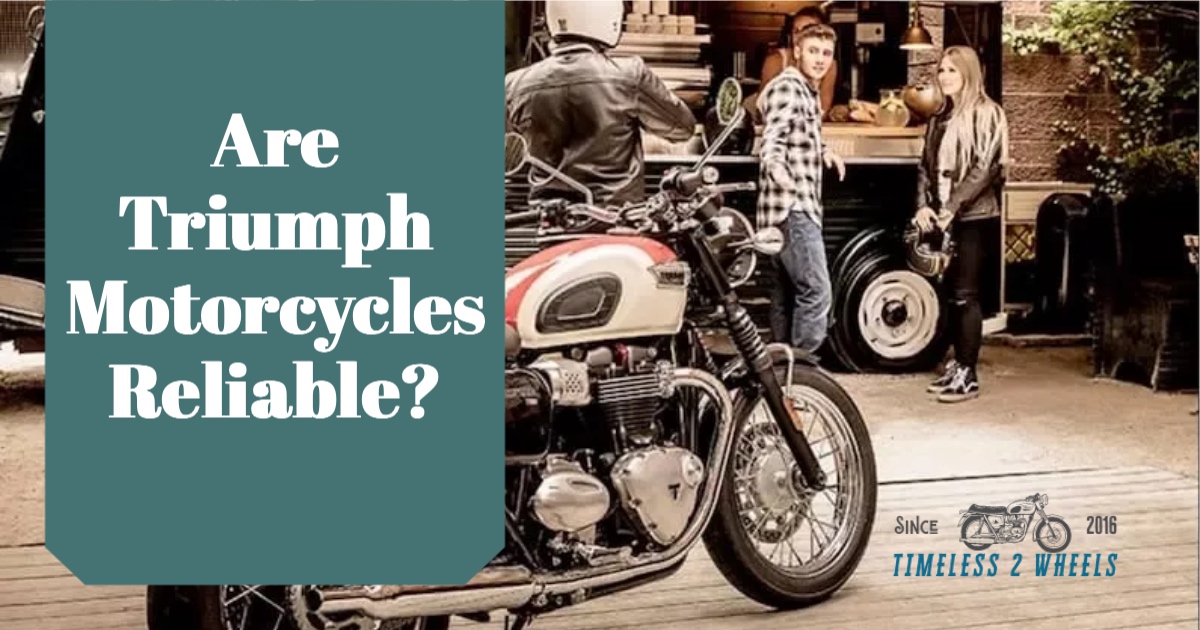 Modern Triumph’s are known to be great bikes. They’re rock solid, reliable, durable and will serve their owners for many miles and riding years.   Like many British motorcycle brands, Triumph… 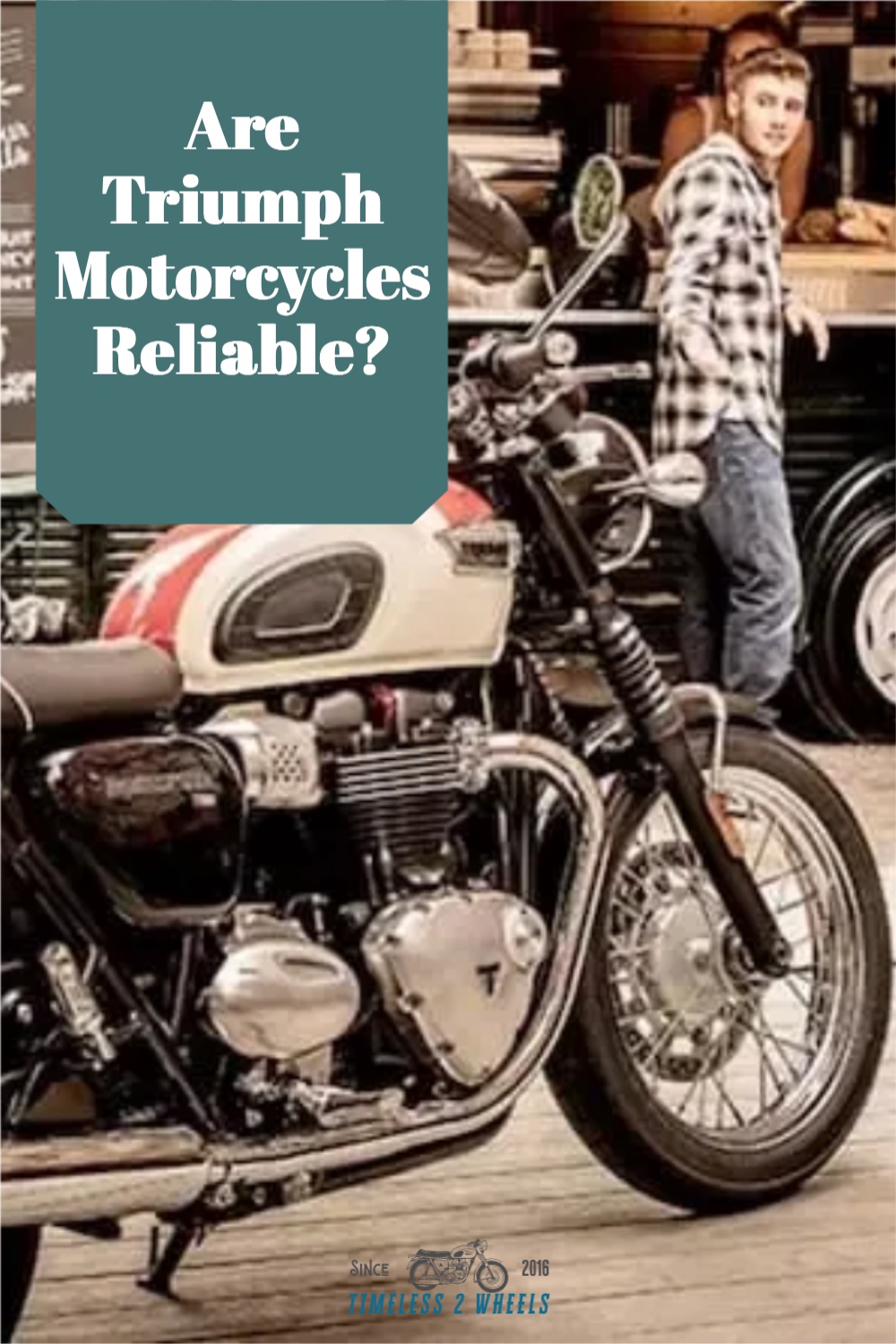 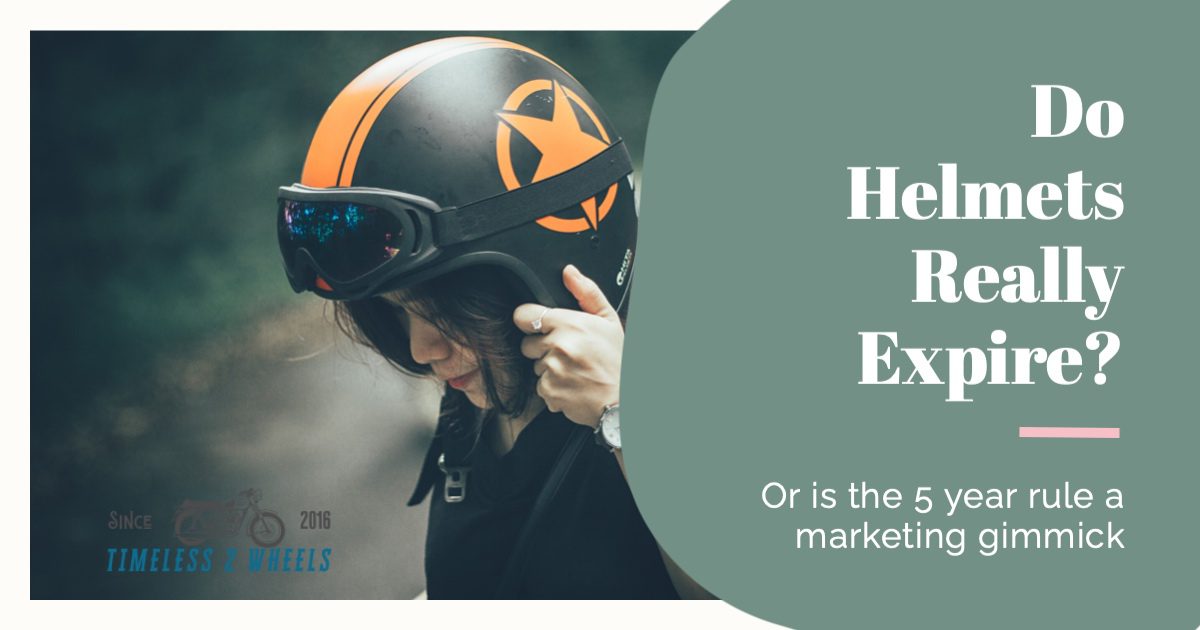 A motorcycle helmet is the single most important piece of kit a motorcyclist can own. It protects us from head injuries, road debris and the elements. Yet more often than… 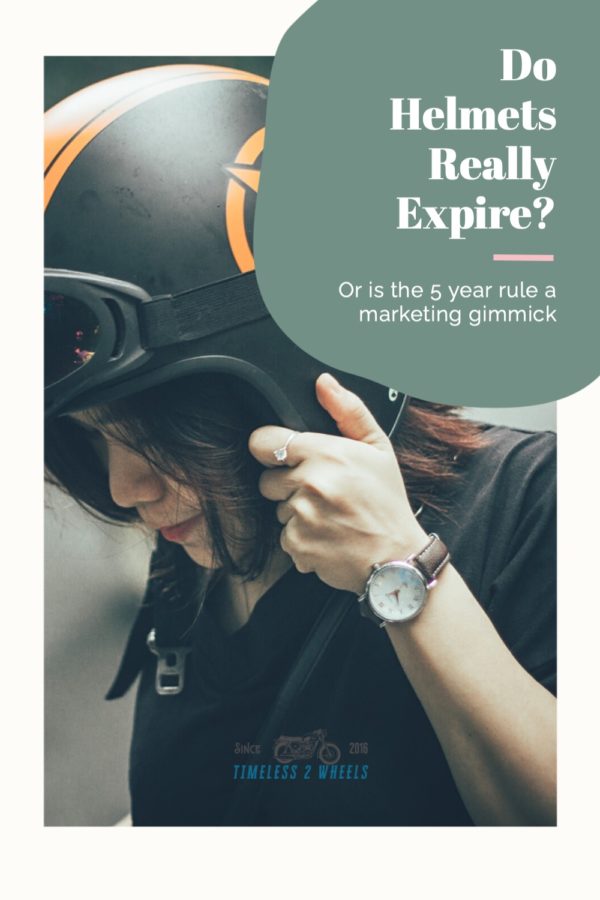