2020 marked the 35th anniversary of the launch of the Suzuki GSXR 750 Slabside, and within that celebration there was more than just one bike to commemorate, there is the whole Gixxer line that followed and a whole new race-replica genre of sports bikes.

There are not too many bikes that are that defining of motorcycle culture, so I’ve gone back to the beginning looking at the roots of the original 750 Gixxer.

History of the Suzuki GSX-R750 Slabside

The Japanese market had received a 398cc GSX-R that had pioneered the alloy frame, and four-cylinder layout, slab-sided styling and double-headlights were all the trademarks of the 400cc machine that the GSX-R750 would adopt and make iconic upon its 1985 release.

Suzuki wanted a motorcycle that could compete in various racing world championships but also be street-legal and so they got to work on a 750cc. Loosely the GSX-R 750 was a detuned and street legal version of Suzuki’s flagship racer the GS1000R.

The GSX-R was to be the first ever production oil-cooled motorcycle using the Suzuki Advanced Cooling System (SACS). It was capable of over 100 horsepower and weighed in at 176kg (dry weight).

A four cylinder inline four engine powered the bike. The engine was narrower than other engines and Suzuki used components made from metals such as Magnesium to keep the weight down as much as possible.

To give the Suzuki GSX it’s sporty edge a 55° leaning angle, lightweight double-cradle alloy frame and 18” wheels went some way to creating the sporty beast it was intended to be, let alone the fact the streamlined design was based on the factory’s Formula 1 racers.

It was claimed in the racing trim the Suzuki GSX-R750 could produce 130 horsepower and a tuning kit was also made available for competitive racers. Flat-sided carbs gave a much better throttle response compared to those traditionally used, although best suited to skilled riders as the throttle turned out to be so reactive it would make riders somewhat nervous.

The true success of the design from Suzuki was in their ability to keep the motorcycle super lightweight without compromising; the SACS oil cooled design for the cylinder heads and pistons was just as effective as the liquid cooled systems the competition was using but 10% lighter.

One of the best motorcycles of the 80s, the GSX-R was first shown to the press and public at the 1984 IFMA Cologne Show in Germany. Production of the Suzuki GSX-R750 followed in 1985 and it wasn’t made available in the US until the 1986 model year.

The side panels below the seat were 2 large pieces of plastic and the motorcycle quickly got the nickname ‘Slabside’ on its 1985 release in the UK.

The first 750cc GSX R’s remained relatively unchanged from 1985 – 1987, then in 1988 the model received its first major modification overhaul such as a new chassis design, new bodywork and engine revisions.

The Suzuki GSX-R750 has remained in production since 1985 with various iterations throughout the years, the model that remained most unchanged was the one produced between 2011 and 2020.

In 2021 Suzuki celebrated its centenary year with the release of the GSX R750 100th Anniversary model, a fitting tribute to both the company and the motorcycle.

Upon its release the Suzuki GSX-R 750 Slabside was met with an abundance of excitement, the motorcycle was a true race replica, a bike that riders could enjoy and channel their inner favorite race hero of the time.

It was technically advanced, built to a superior spec, as far as Suzuki could go with it while keeping it within the parameters of needing to be legal for the street. The limited R version took that even further in 1986 with new suspension, longer swing arm and radial tires; all of which would pass down to the base model as stock shortly after.

Some reviews at the time thought the GSX R750 was a little too similar to the track version – more than capable of beating all its competition but likely to have mechanical problems sooner rather than later unless you happened to have your own race team engineers to look after your bike.

In order to prove critics wrong Suzuki loaned 2 Gixxers completely stock off the production line to take part in a 24 hour endurance test.

Paul Dean set about making this happen at a track in Laredo, Texas and as he quotes:

Both GSX-Rs had traveled more than 3000 miles to set a 24-hour world speed record for motorcycles, with the blue one (128.303 mph average) narrowly edging out the red one (128.059). Along the way, we also had set records for 2, 3, 4, 5, 6, 7, 8, 9, 10, 11 and 12 hours. And as Jack Dolan, the chief FIM official in attendance, told us, those were absolute records. No motorcycle of any type, any displacement, any configuration, naturally aspirated, supercharged or turbocharged, had gone faster for any of those time periods. Ever.

A feat like that was sure to silence any naysayers about the new Suzuki enduring capability under high-performance circumstances.

The new Suzuki Slabside proved its worth in its initial race outings and its performance could not be questioned. Here are just a few examples:

Over the years the various versions of the Suzuki GSX-R750 have continued to take home awards and race titles, continuing the original bikes impactful lasting legacy.

There is really only one key piece of advice when looking to purchase an original GSX-R750 (’85-’87) and that is to be extremely thorough in your search. Don’t go for the first one you see, and be prepared to spend time looking for the right motorcycle.

The new genre of race-replica motorcycles led the the Gixxer to be treated as such by its rider. They will have likely been, re-tuned, modified for even sportier performance, and there will almost certainly be a time or two where the bike will have been laid down.

You want to go for a Suzuki with as much history as possible and ideally buy from an owner who knows exactly what it is they are selling, as opposed to someone who thinks a 1985 original is of the same value of one from the mid-90s.

Bonhams sold the race winning bike from the all Japan TT F1 Championship in 2018. That sold for just over £26,000. Pricey, but worth it for a piece of race history for the right buyer.

Parts are easy to come by and in abundance thanks to the long production life of the Suzuki GSX-R750. However, you will want to ensure that the parts are original for the ’85-’87 models and note that stock exhausts are quite hard to come by as they were often swapped out by owners.

Some examples of part prices are as follows:

There is also a healthy replica parts market that could fill the gap for wiring, brakes, etc.

Yes and No. The GSX-R750 from 1985-1987 if you can find one in good condition or are capable of restoring to original high quality spec then yes. The bike is collectible as the one that started it all, and those in mint condition are hard to find by the very nature of the fact they were raced around, and used as intended.

However, in comparison to other classics of the same era, even the mint condition bikes aren’t destined to increase greatly in value any time soon.

The true value is finding one that you can ride and adding it to your arsenal as opposed to investing for longer term profit.

I stated when writing about the Suzuki GSXR 1100 that I would struggle to manage it on the back of its ruggedness and pure beastly size, but I still want one.

The GSX-R750 Slabside would be more physically manageable for a girl with a bad back who wants to channel their inner racer on a weekend for a few miles before stopping for bacon sandwiches and tea.

Big fan of the original race rep here all the way from the legacy it started to the paint schemes, it’s brutal elegance at its best.

Featured photo at the top of the page of a “Suzuki GSX-R750” was taken by Bottspeed and is licensed under CC BY-NC-ND 2.0 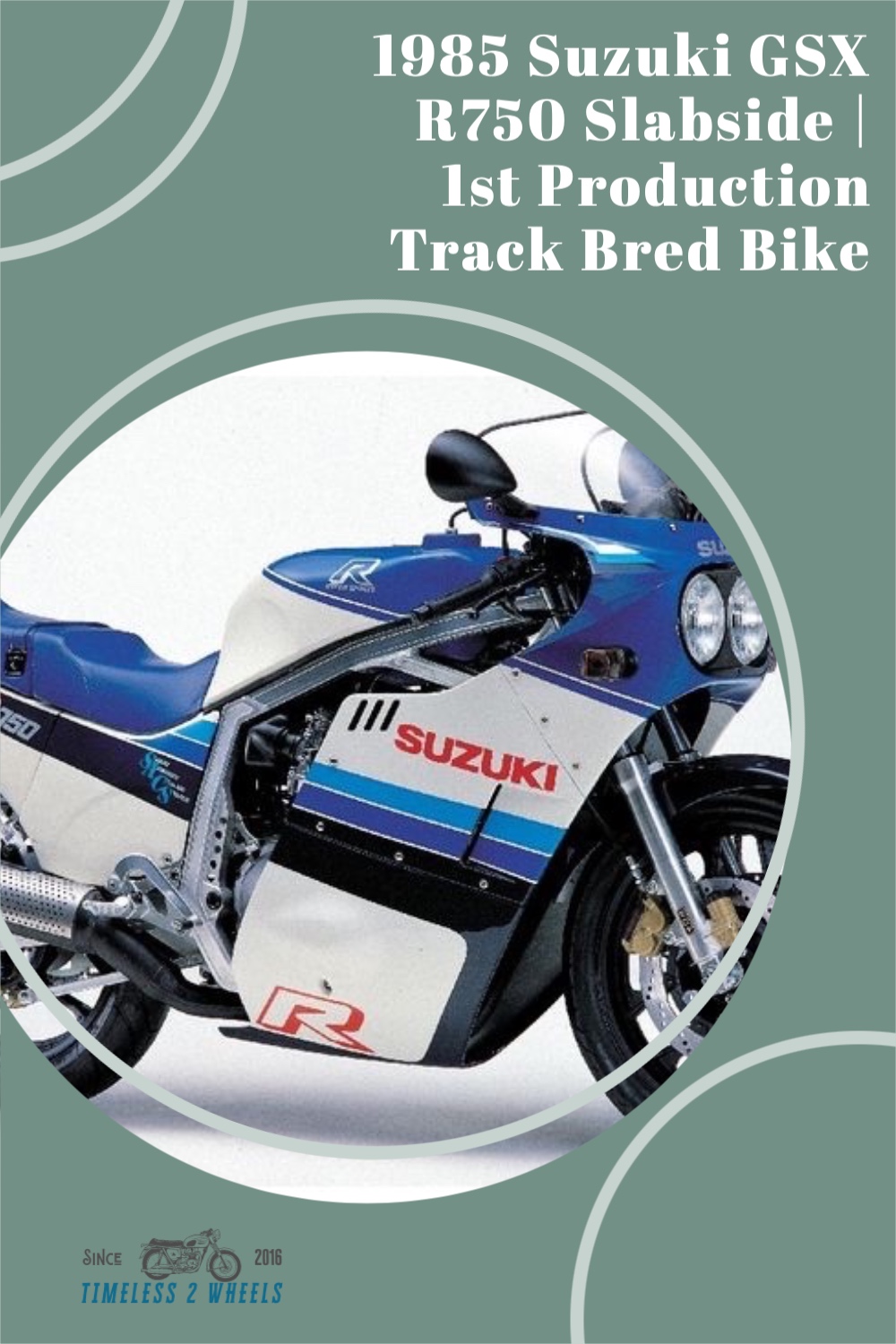 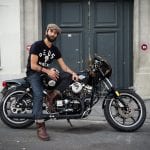 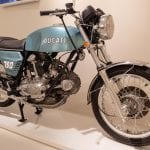