Deriving from obscurity the 1973 BMW R90s moved the German Motorrad company from the producer of boring, plain, workhorses, to race-winning, edgy, cool motorcycles in the eyes of the press and public worldwide.

The BMW R90s wasn’t produced as a motorcycle for everyone and the price certainly made that clear, but it was a motorcycle that was desirable across the board and one that paved the way for BMW to firmly plant themselves at the top with other leading manufacturers at the time right up to present day.

So, how did the BMW R90s come to be and how did it have such a lasting impact?

In this article I take a deep dive into the BMW R90s, let’s get started.

History of the BMW R90s

In the late 1960’s and early ‘70’s sales were falling for the German motorcycle manufacturer. They were simply failing to capture the public’s imagination.

The Japanese were on the takeover of the industry, Honda had dropped the CB750 in 1969 which claimed the title of the ‘World’s First Superbike’ and the Kawasaki Z1 hit the streets in 1973.

Harley Davidson was still going strong and by 1971 their first production factory custom hit showrooms in the form of the Super Glide FX. As for the British marque’s, some were in crisis but the world wasn’t quite fully aware just yet, and with the Norton Commando and Triumph Trident still on people’s radar, they still stood strong within the industry.

BMW needed something new to revitalise their line-up and generate interest from the public, which in turn would increase much needed sales.

The challenge fell to BMW North American Sales Director Bob Lutz and Hans Muth whose job was actually designing the interiors of BMW cars; Muth would later go on to design the iconic Suzuki Katana.

Bob Lutz and Hans Muth used the R75 model to form the basis for the R90. The air cooled two valve, horizontally opposed twin 745cc from the R75 had the bore increased and it retained the stroke which turned the engine into a 900cc. Other engine modifications included strengthening the bottom end and a new alternator and it got a five speed gearbox.

The R90/6 was released at the same time and was a slightly more conservative (and unfaired) version. The R90s pushed out 67 horsepower at 7,000rpm and had a top speed of over 124 mph, the bike’s compression was tuned to 9:5-1, and was equipped with a pair of 38mm Dell’Orto Carbs which had accelerator pumps.

Therefore, the new BMW was capable of competing with nearly everything on the market at the time with the only exception of the Z1 which was in its own lane with 82 horsepower. As for stopping power, drilled twin discs graced the front while a drum provided the extra bite at the rear. The twin discs was a first for a BMW motorcycle.

Styling wise, no expense was spared when it came to the BMW R90s. A unique ‘bikini’ fairing was mounted to the handlebars and very unique airbrush paint scheme in Daytona Orange and Smoke Grey brought the whole motorcycle together.

The new colours proved very popular in a time when BMW had mostly only been producing motorcycles that were painted black. Only one complaint at the time was that the pinstriping was stuck on rather than painted on, but this was later rectified.

Hans Muth referred to the Orange as “Egg Yolk” and he wasn’t a fan particularly but it sold well and publicly was named “Daytona Orange” on the back of the race wins at Daytona.

A large fuel tank, useful white-faced gauges that sat above the speedo and tach, bench style seat that fit the shape of the rear cowl all added to the impeccable styling of the new BMW. The finish quality of it all made the new bike really stand apart from the rest.

Only one technician assembled each motorcycle which really gave them that hand built and finished feel, with every inch being paid serious attention to the details.

The fact was, nothing about the BMW R90s was overlooked. Performance matched the intricate styling and therefore the whole package made it the best all round superbike come sports tourer of the times. It may not have been the fastest, but there was no other motorcycle at the time that could maintain top speed all day long and do so while keeping the rider feeling comfortable and in control.

Built for touring, the BMW R90s handled well, with a steering damper in the cockpit, there was a lack of vibration and the fairing did a good job of keeping the majority of the wind off the rider. A fairly standard steel twin down tube frame, leading axle forks and twin shock rear provided a stable bodied motorcycle. All of this went some way to making the bike easy to ride for as long as the rider wanted.

Very few changes were made throughout the BMW R90s production. Minor upgrades were implemented, the biggest changes came in 1976 when the model received new crankcases, swing arm and calipers; the fact was the bike was just built right from the get go.

The R90s made quite an impact when it was released, both press and public were intrigued and excited. There was really only one issue with the bike that limited its potential consumer range and that was the price point. Classic Bike Guide states the R90s was priced at £1799 at its release, for reference a Triumph Bonneville at that time cost £585.

17,348 models were produced between 1973-’76 so while the R90s was outsold by other models in their line-up during that time, the figures are not too bad, especially considering the price point; consumers could obviously see the value/benefits of the bike.

At a time when the Honda CB750 had sparked the UJM (Universal Japanese Motorcycle), the BMW provided a better handling, better all-round, performance motorcycle, so those with the bigger budget were happy to spring for the more expensive alternative.

When you really analyse the price difference of $3,400 for the BMW as opposed to $1,435 for the Kawasaki Z1, the German’s really had to create an appeal worth investing in.

To me, the R90S is arguably one of the most significant motorcycles ever made. It may be egotistical to say this, but I believe I am the founding father of the idea behind the R90S. The S made BMW motorcycles respectable again! Not only outside the company, with the magazines, and with buyers, but within the company too. It proved to BMW it could compete and make money in the bike business, and the money the R90S made helped pave the way for future motorcycles, many of which are iconic themselves.

Not intentionally built to be a race winner the BMW R90s was a winner on the track which certainly went some way into bolstering its reputation as a worthy challenger to the Japanese superbikes. Here are some of the races the R90s took part in on the track, albeit they were some pretty modified versions of the stock model:

With all it’s prestige and fandom the BMW R90s is a classic bike that is collectable and remains in relatively high demand. With that comes a pretty hefty price tag which will come as no surprise given the cost of the bike back when it was originally released, so not much has changed.

Car and Classic have one R90s advertised at time of writing for £11,500/$16,014 and it is currently in Vancouver, Canada. The seller states that freight to the nearest port for collection will be included within the sale. It is a smoke grey model that has been taken care of with 34,800 miles on the clock.

There are a handful of other adverts listed for UK mainly buyers priced between £9,000 and £16,500 only 2 of these are in the most collectable Daytona Orange paint scheme.

Cycle Trader has 3 bikes listed at $13,995, $14,950 and an eye watering $30,000. Not entirely sure how the $30,000 can be justified even in the Daytona Orange. However, it makes the bike in Canada with free freight more viable for US buyers and goes some way as to showing the potential profits for an investor in a R90s, to note the bike has a similar mileage to the one in Canada.

Smart Cycle Guide also has several models advertised with the average price sitting at around $13,500.

Parts are not hard to come by for the R90s and are fairly average in their cost in terms of being on par with other BMWs from the same time period. BMW motorcycles and cars are known to have a tendency for parts having somewhat of a premium, so it would be unfair to compare the R90s parts with that of a Triumph or Honda.

The only problem you may come across with a BMW R90s restoration is difficulty in repairing any damaged paint work. Each bike was unique thanks to the air-brushed technique used so it would be a very skilled artist that could cover up any blemishes etc.

Here are some examples of the cost of original parts:

Is a BMW R90s a Good Investment?

The BMW R90s will continue to be coveted and as more time passes there will be fewer models in immaculate condition that are collector worthy. Paying a fair price for a good one now and keeping hold of it will likely see a good return in the future.

The BMW R90s is an historic motorcycle that shot BMW up the ladder of notable motorcycle marques, and one that triggered other iconic BMW’s that followed. This history cannot be wiped away and so fans of the German motorcycles will continue its legacy.

The Orange option is the most desirable among collectors.

I am more of a fan of BMW 3 series cars from the 1980’s than I am their motorcycles.

However, with that said the R90s is iconic and I simply cannot ignore the craftsmanship, intelligent design, and on going impact that the bike had on the motorcycle world.

There are not many motorcycle designs that got it right from day one without the need for some re-working. The team behind the R90s got it right and pulled the BMW brand from obscurity, so for that it completely gets my respect and the styling gets my admiration. 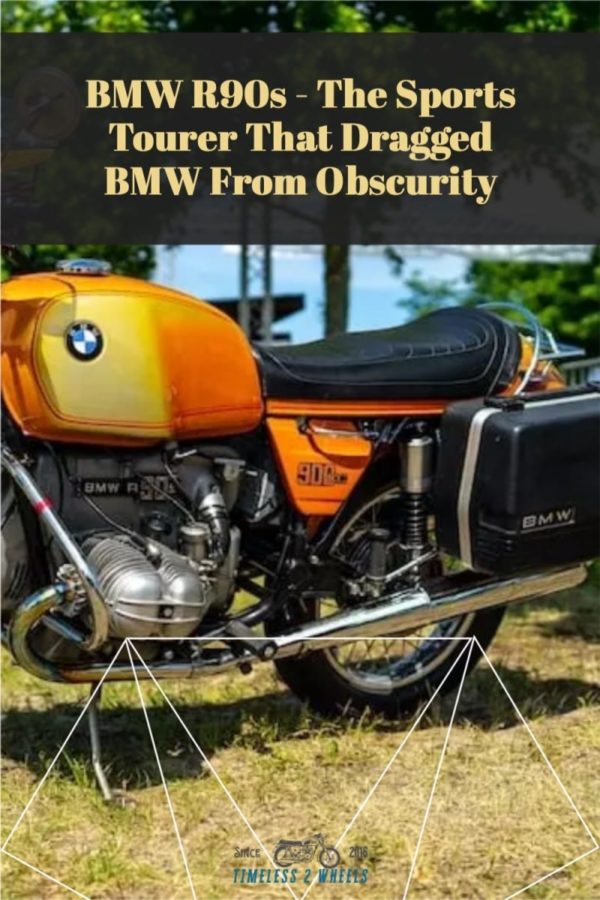