The Kawasaki Kz1000 was a motorcycle that set the bar for the litre capacity bikes that would follow. It was one of the fastest production motorcycles of the time and followed in the footsteps of the legendary 1972 Kawasaki Z1.

Today Kawasaki is known for their fast, high-performing motorcycles but none of these would be possible without the original litre bike, there would be no modern H2 that does 4 million mph without the Kz1000 and the various iterations that followed.

Well worth looking into, especially when you come to the “buying one” section and you realise these classic beasts are more than affordable today to have some fun on. Let’s get into it.

Kawasaki had such success with the 900cc Z1, they wanted a bigger motorcycle but with the same styling and that was the purpose of the new version. While the 900 is considered the start of the Z line its bigger brother is really recognised as the start of a new breed of superbike.

British manufacturers had been adjusting their models for the US Market since most of their bikes inception, after the “Easy Rider” wave of customisation had swept through motorcycle culture, it hadn’t quite had the same effect on Japanese bikes.

Wayne Moulton, who was director of Kawasaki for the US knew the Z1 was a solid base to work off for a hot-rod that would fit right into this idea of customised motorcycles, and would upgrade an already successful motorcycle.

A KZ400 tank was welded to a Z1 tank to give a low slung, teardrop tank, spokes were swapped out for cast-alloy wheels and a pull back handlebar completed the hot-rod look.

The renamed KZ900 LTD of 1976, really laid the groundwork for the changes of the Z1 that the Kz1000 would also take on. The KZ900 LTD was a hit, limited production of 5,000 bikes, meant that the bikes were coveted and the public couldn’t get enough of them.

The predominant difference between the bigger Kz1000 from the Z1 was a bored out engine from 66mm to 70mm, what this did was increase the horsepower to 85 horsepower versus the Z1’s 82 horsepower. The engine therefore was an 1015cc air-cooled, in-line, four-cylinder, four-stroke, 2 valves per cylinder, DOHC.

The new Kawasaki had just one disc brake up front in the US (with a second available as an additional extra), whereas in Europe the bike came standard with twin-discs. Both versions however, received disc brakes on the rear as opposed to the rear drum that graced the earlier Z1.

The Z1 had 4 exhaust pipes however, for the new Kz1000 Kawasaki decided a 4-into-2 Jardine exhaust was more fitting and more cost-effective. The rear end was made up of a swing arm with two coil over shocks and it weighed in at over 255kg wet.

In 1976 Cycle World wrote “The Fastest Stocker We’ve Ever Tested.”

The new motorcycle was a raging hit among the press and public and it firmly placed Kawasaki at the top of Japanese superbikes for some time. It was only until their own GPZ900 that followed years later, that the Kawasaki Z1000 or variants thereof were knocked off the top spot.

Following on from the successful LTD range of the KZ900 a LTD Kz1000 was also produced with the styling certainly adapted even more so for the US market.

The Kawasaki Kz1000 LTD was the first production motorcycle made at the Lincoln, Nebraska plant in the US and was part of the process of the ‘Americanization of Kawasaki.’ 200 personalised bikes were built for a ride from Nebraska to St. Louis to promote this new campaign and celebrate the bikes being built in America.

The LTD was a more cruiser-like version, very much styled to appeal to the US consumer tastes, with added chrome, forward pegs etc. likely based on a clear market domination of Harley Davidson at the time.

The Kz1000 C and Kz1000 P were the motorcycles made for the US Police and it remained in production and used by the Police up until some way into the mid-2000’s. It had a big fairing, lights, siren and radios. It was favoured by police forces in the Western States, whereas the East leant towards Harley’s.

The Mark II came in 1979 with an increased power output to 93 horsepower, and standard front dual disk-brake, the carbs also gained accelerator pumps.

It remained in production until 1988, with improvements made along the way, and other icons being produced alongside (and on the back of).

For example the Z1-R, which was the first Kawasaki with a handlebar mounted fairing. The exhaust was also switched into a 4-1, and it received bigger carbs, smaller front wheel which improved handling and overall performance. 1100cc motorcycles were also produced in the ’80s.

Later generations of the Kawasaki have won and partaken in many races over the years, with the likes of Pops Yoshimura pushing out reliable performance Z1000’s for the big championships.

Mamoru Moriwaki, a man who raced for Yoshimura up until the latter decided to move his company to the US and Moriwaki wanted to stay in Japan, set up his own engineering company and produced several Z1000’s that raced in the Australian Superbike Championships.

Probably not an award depending on how much of a movie buff you are but an interesting fact nonetheless some of the motorcycles used in the original Mad Max movie were modified Z1000’s, which if a motorcycle is going to be in a movie, Mad Max isn’t a bad one to be in.

The Kz1000 was continually produced for police use, and was used in the TV show CHIPS by characters Ponch and Jon. If that sparks some nostalgia for any interested buyers you might want to check out the example advertised on Car and Classic for £4,495 that seems to be in great condition.

Another good place to look for the Kz1000 Police edition would be local police auctions, ex-police vehicles tend to be really good value for money and it is possible for you to pick one up for just over $2,000.

Prices tend to be slightly higher in the UK compared to models for sale in the US, with some bikes selling up to £8,000, the average seems to be around the £5,000 price point with most of the bikes being US imports. In the US prices vary on average from $2,000-$5,000.

Red Line Cycle is advertising a 1977 example that was used for Car and Driver Magazine test ride then shortly put into storage thereafter.

It was model number 361 to roll off the production line and was the first motorcycle ever to be compared against a car in Car and Driver Magazine, the car the Kawasaki had to beat? None other than a Pontiac Trans Am, the bike was lightyears ahead on the quarter mile. There is no price listed for this example, but worth getting in touch with Red Line to enquire if interested in this mint condition Kz1000.

You can find a couple of Kz1000’s here on Red Line Cycle’s page and they are all in excellent condition, as the company is an old Kawasaki specialist dealing predominantly in 900/1000 bikes. You can see a list of previously sold 1977 model year bikes for which prices vary from $2,000-$5,000.

One of the best resources that I found for those that might engage in a restoration project of an original KZ1000 is again Red Line Cycle. They have an extensive parts catalog, you can take a look here. Full of useful information including guidance on how to rebuild a Kz1000 motor, the website is well worth a look.

Another good resource for original parts is CMS based in the Netherlands that ship worldwide and have an broad online catalog for all models of the early Kz1000’s, you can check them out here. Z1 enterprises are also a good site for parts based in the US.

Some parts price examples gathered from various sites are as follows:

The good news for a restoration project on the Kz1000’s is that the initial outlay isn’t too high to find a bike and therefore would be a fun project to work on for those who are budget conscious and at the end you would be left with a pretty all-round solid bike. One that you would be able to at least get back financially what you put into it, or keep and ride the classic all the while keeping up with a lot of modern motorcycles.

There is a healthy replica parts market for the Kz1000 so even if you got stuck with a particular original part, you would have no problem finding a replica to fill the gap.

Is an Original Kawasaki Kz1000 a Good Investment?

The original isn’t the most financially beneficial investment when compared with other classic motorcycles of the same era. UK buyers could potentially make some money if you can pick up a bike on the cheaper end of the market, tidy it up, you could probably sell it on for a small profit.

It should be purchased for the love of the bike and not financial gain. Although, running bikes are getting rarer, so maybe value will have an upswing in coming years.

There were various limited editions made however, these are like gold dust in terms of rarity. It is only one of these if one came up at the right price would a Kz1000 be deemed a worthy investment.

The latest version is beyond popular today across the board and while it is significantly different in design; it is very much worth looking back at where the modern bike’s roots started and showing appreciation for the one that paved the way.

A little beefy for me personally. Maybe if I got hold of the LTD version with a slightly lowered cruiser stance I would be happy, or even better sign me up for the baby brother that is the 1976 KZ650. Having ridden the modern Z650 and loving it, I’m 99% sure with my obsession for classics an original needs to be in my arsenal. 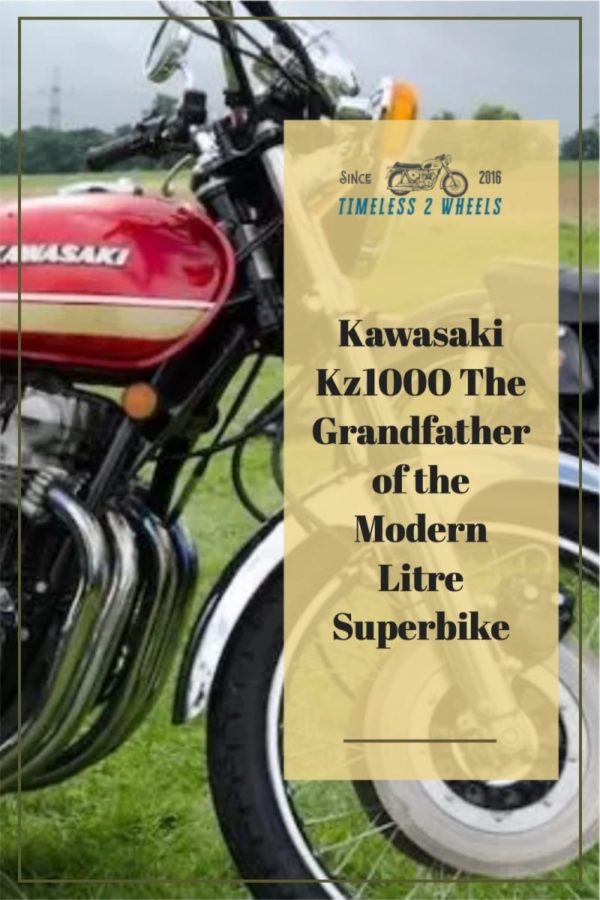