In the world of superbike racing, simply having the fastest machine will never be enough. Every manufacturer is constantly improving their bikes in order to stay on top, and sometimes that means utilising any and every loophole you can find in the rules.

Many of the larger manufacturers do this with the homologation rule (to take part in Super­bike racing, they must produce a bike in a specified number of street legal examples for sale to the public). In 1996, Kawasaki took this slightly further than its rivals by introducing the ZX-7RR.

By the end of the 1995 world superbike series, it had become clear that Kawasaki’s ZX750M was long past its racing prime. Unable to challenge its rivals on the track, Kawasaki gave the bike a huge overhaul resulting in the launch of the ZX-7R.

The new model featured an inline four 748 cc double overhead cam with a heavily revised combustion chamber. The overall engine construction was also strengthened. Coupled to the revised combustion chamber was a new twin ram air intake with a larger capacity and a new down-draught angle that resulted in a power increase. In addition a new stronger and lighter frame was introduced, and upgrades to the braking system included new Tokico six-piston calipers replacing the previous four-piston units.

However, it was the ZX7RR Kawasaki released alongside the “standard” R that Kawasaki really stretched the homologation rule with, producing just 500 with only 50 of these making their way to the UK and just 20 of these being registered for the road.

The “Double R”, as it became known, was essentially a World Superbike spec road-legal version of the ZX-7R. The 748 cc engine was the same 121 bhp unit used by the 7R, however the 7RR came with larger 41mm flatslide carbs, instead of the 38mm CV Keihin items used on the base model. These increased the air-flow to the engine and also gave it a more instant response, needed for racing.

The Kawasaki ZX7RR also came with a close ratio gearbox and a heavier crankshaft flywheel that helped get power to the ground. The clutch also came with fibre-based plates, which had a reduced lifespan but absorbed power and heat better.

The ZX7RR’s frame geometry is variable as well. An adjustable swingarm pivot allows the rear suspension to be setup for maximum traction, while in the steering head, eccentric bearing races allowed alterations in the bikes rake and trail dimensions for differing riding styles and tracks. Until the Double R came along the only bikes that offered full chassis adjustability were Grand Prix or World Superbikes.

An aluminium subframe reduced weight compared to the standard steel offering, although several points on the chassis had to be reinforced to increase the bike’s rigidity. The single seat of the ZX7RR gave a simple message, that this was a bike for a single purpose, to race.

In the British Superbike Championship, Chris Walker secured 2nd in the 1998 Championship winning 5 of the 24 races that season.

Unfortunately, it’s successes didn’t expand to the World Superbike. It only managed to achieve 7th and 9th during its inaugural championship in 1996 with a few victories along the way. However, it never managed to beat the 1000 cc twins for the number one spot.

Although the ZX-7R ran from 1996 to 2003, the ZX7RR, as a limited production Homologation special, was only released once with just 50 of these sold in the UK. A few later models were made by Kawasaki, however these were for their factory or customer racing teams only.

There are just two Kawasaki ZX7RR left in the UK with an MOT.

A lot of the ZX7RR machines went straight to the track where racers would strip them of their street parts and tune the engine for the track. Finding one today in good condition with the original street parts is already becoming extremely difficult. If you are fortunate enough to find one that has been raced, trying to get it to run on the road again properly would involve another engine rebuild to get it carbureted properly, and then there’s the task of sourcing any missing parts to make it road legal again.

All these things are possible, and if done correctly will leave you with a fantastic road bike and an increasingly rare piece of motorcycle history.

Shared parts with ZX-7R are easy and affordable to come by, both new and second-hand. However, finding street parts specific to the ZX7RR model is extremely hard and tend to be at the heavier end of the cost scale.

To put it in perspective, if you were looking to completely replace the front brakes, just one of the calipers will cost £420 and aftermarket front brake discs come in at £460 for the pair. The front master cylinder assembly is £300 and brake pads are between £100-200 depending on the quality and braking power you want. So that’s going to be around £2,000 for a complete set of front brakes.

So if you are thinking of restoring one, be prepared to have a blank cheque ready.

Is the Kawasaki ZX7RR a good investment?

Continuing on from the price of parts, which are extremely rare and as such, expensive, the value of a ZX7RR has doubled since 2018. With prices averaging around £7k just 3 years ago for a top of the range used model, today are now worth £14k for the same machine.

Remember, only 500 of these were ever made with 90% sent directly to a track and likely destroyed as a result, leaving the world with less than 50 which are still functional. With less and less available on the market, the trend will only continue to spike upwards. At the time of writing, I could not find any for sale online.

For everyday road use the ZX7RR is not a functional machine. The engine needs to be revved to get going and doesn’t really do much until you hit around 8000 rpm. It’s flat-slide carbs struggle to run cleanly at low rpm, meaning slow riding in city traffic in a vastly unpleasant affair, and with the tall first gear this only exacerbates the problem further.

The Kawasaki ZX7RR was never meant for the road, it was simply Kawasaki’s way of cheating the system to have a quality racer enter the various Superbike championships.

But would I have one? Yes, if I found one today (which I still haven’t) I’d find the funds without a second thought. Though, I’d be afraid to ride it, fearing that I wouldn’t be able to do so the way Kawasaki intended, fast and hard. On a race track of course. 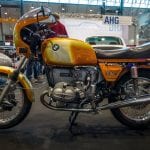 Kawasaki Kz1000 – The Grandfather of the Modern Superbike