The 1975 Honda CB400F Super Sport is a motorcycle that divides opinion and has done since day one. On one side are those who believe it to be a gutless and under-performing machine compared to that of the larger motorcycles from the same time period including from Honda themselves; and on the other are those who see it as an icon and design that paved the way for other manufacturers to learn from and replicate into their own designs.

I am going to write this article as impartially as possible so you can make your own mind up on this smallish rocket from 1970’s Japan.

In 1974 Honda introduced not one but two groundbreaking models that had the press and public beyond excited. It was 5 years since the legendary ‘World’s First Superbike’ the CB750 was released and Honda needed something new to create waves. The first was the Goldwing, a big, mean touring machine; the second was the CB400F Super Sport.

The CB500 Four had been released 3 years prior to moderate success and shortly after the CB350 Four which was never released in the UK. Honda knew that there was a market for a smaller machine as efforts across all manufacturers were mainly focused on the craze of Superbikes; for example the Kawasaki Z1 was taking the world by storm.

The problem was Honda were still riding the coat-tails of the successful CB750 and for a while shifted gears to focus on their car production.

However, they soon returned their attention to bikes and introduced the Honda CB400F at the 1974 Cologne motorcycle show and released it the following year. It was a motorcycle that was perfectly built for being the ultimate production racer, with an engine prime for tuning and race development.

While many attributes came from the 350 Four predecessor the 400 Four had a new chassis, cylinder block, heads, and all new gearbox.

The one thing many riders at the time commented on was the intuitive handling. Yes I said it, Honda created a 1970’s machine that handled well and noteworthy; not just a first for Honda but generally across the board of all the Japanese marques.

In terms of engine, the CB400F Super Sport was equipped with a four-stroke, inline four cylinder, single overhead cam, 2 Valves per cylinder, 408cc that produced 37 horsepower, 32Nm of Torque and a top speed of 103mph. The engine was air-cooled, had 4 Mikuni Carbs, final chain drive and was connected to a six speed transmission. All of that led to the bike being able to accelerate 0-60mph in 6.7seconds.

The bike wasn’t built to set the roads on fire as it was only a 400cc but with enough grunt and a wet weight of just 185kg; for its capacity the new Super Sport was pretty hot and the flat handlebar and rear set footpegs gave the 400 Four a slightly aggressive riding position.

The steel-tube, double cradle frame was stiff and aided the great handling the bike would become known for; the telescopic front fork and twin-shock rear did it’s job pretty well, and for a change riders weren’t complaining about poor suspension.

Brakes were a single disc at the front and shoe at the rear.

It was really the styling that set the bike apart from everything else at the time; although very traditional of the era in terms of being styled in the cafe racer vibe, it was done in a way that paid attention to detail and had the bike towering over competition.

The slab style fuel tank was large allowing for riders to do around 150 miles before needing to refuel; but it was the 4 into 1 exhaust that stole the show, with a chrome collector box and megaphone shape silencer.

The CB400F Super Sport would soon be replaced by parallel twins such as the CB400 Dream and Super Dream which had their own positive attributes but they didn’t have the European styling or performance of the Honda CB400F.

Another feature of the 400 Four Super Sport was the fact the bike needed to be ridden. You had to rev it to get it moving and use the gears, you couldn’t sit back and let it do its thing. This was an adjustment for many, having to keep the revs going was a whole new technique for riding; the 6-speed gearbox aided this and once used to it, few owners had complaints.

How was the Honda CB400F received ?

“With looks that scream ‘racer’ from every sparkling highlight on those distinctive four-into-one exhaust pipes to the scarlet works-styled tank and mini side covers and folding setback footrests, it feels so unarguably right it’s almost unbelievable.”

Some were left disappointed with the performance from the CB400F Super Sport and felt it lacking. What is important to point out again here is that the world had become obsessed with Superbikes and only until recently two stroke machines were King so to directly compare a 400cc four-stroke to either of these was always going to leave owners feeling short changed.

The 400F was the pick of the time for production racing and Dixon racing who was a British Yoshimura agent in England was one of the first to turn their hand to tuning the engine.

They boosted it from a 408cc to a 458cc using a modified cylinder head and new exhaust system. Once Dixon was through with modifying the bike including upgrading the chassis etc. the modded 400F ran the quarter mile quicker than a stock CB550F.

There were many dealers and privateers that would go on to tinker with the  400F and see what they could get out of it during amateur race days and Ron Haslam won the Formula 3 title in 1980 riding a 400 Four Super Sport built by Nettleton Motorcycles.

In America ex Honda R&D employee Kaz Yoshima made a name for himself re-building the engine for the race track and it’s said a Kaz built 400 Four bike could touch 135mph and give the Kawasaki Z1 a run for its money.

The fact was the Honda CB400F was one of the smallest machines ever to be imported into the US and it just wasn’t a big hit across Honda dealers in the US. ‘The bigger, the better’ was the stance at the time and for that reason this four-stroke 400 just didn’t cut it.

In the UK however the 400 Four was a hit and today is still admired by those who look back on the bike and get that nostalgic feeling of youth and rebellion.

Finding a Honda CB400F for Sale

Today finding a Honda CB400F that has been meticulously looked after and in good, clean, stock condition is not impossible but it isn’t something that happens all that often either.

Car and Classic are showing a good looking stock Parakeet yellow model from 1977 and it is advertised as being in good running order, with just short of 30K on the clock, a small history file and six former keepers all for £4,495.

Another is listed for £3,600 ‘in honest working’ condition, just short of 50K on the clock.

Smart Cycle Guide has a light ruby red example advertised in New York for just $1,395. No doubt at that price in need of some work but still an absolute bargain.

When looking to buy a Honda CB400F there are few things you will want to look out for:

While scrolling through for bikes for sale I thought this advertisement on Car and Classic is interesting:

An extra £3,000 and the bike is essentially restored, so there must be some profit to be made for the seller at the price in order for it to be worth it. Admittedly it isn’t going to be a fortune but it still seems to suggest that restoring a CB400F on some level is financially a good viable decision.

As usual if it is a passion project that information is irrelevant!

The good news is that as with buying one, cheap bikes are available and in need of work so getting a fair priced project bike won’t be too much of a challenge. Parts are also plenty available and priced fairly.

Is the Honda CB400F a Good Investment?

The sporty CB400F is appreciated now more than it was when released, certainly by those in the US. However, the average prices are likely here to stay and I would be surprised to see them majorly shoot up in the years to come. There is likely some money to be made on a restoration project but certainly not a fortune.

I would put the Honda CB400F in the ‘buy one, ride it, love it, keep it’, section, not in the ‘put my money into something safe’ section.

Now for my opinion… it’s the underdog, it’s the underappreciated, divisive, misfit, of course I love it. The CB400F stylistically is a joy to look at, it is more refined and respectable than the two-strokers that we all love but it still has an edge and is a toy I want to get my hands on to test it out on the track. Safe to say the CB400F debunked the theory for Honda that they are ‘boring’. 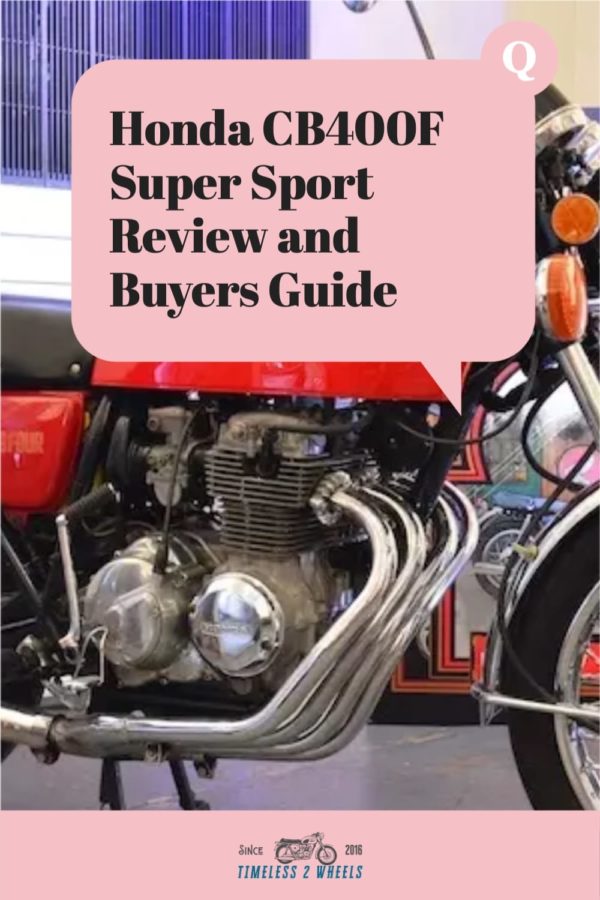