In 2014 the Harley Davidson Street 750 was released. A polarizing motorcycle that divided HD fans around the world. For many years the smallest bike in the Harley Davidson line-up had been the 883cc Sportster in its various guises such as the Superlow or Iron 883.

It was the 883 that was marketed as being the entry-level Harley, the ‘baby’ of the bunch; although nobody can really argue that the heavy V-twin is actually an entry-level motorcycle.

So, seeing a gap in the market to encourage youth and a new batch of riders into the fold, Harley execs got together and formed the plan to release a smaller, more realistic entry-level bike and the Street 750 was released to the world.

Was the Harley Street 750 Built in India?

It wasn’t just the need to be more accessible to new and young riders that was a big part of the decision for the Street 750; HD wanted to get a foot in the door in the Indian and Asian motorcycle markets, where small capacity machines are more prominent and in demand.

As Ride Apart tells it “At the time, former CEO Matt Levatich explained that the new Street lineup “fills a need for people who want to identify with a brand but have a motorcycle that is less intimidating, and more inviting. This bike is easier to ride and easier to learn how to ride.”

The bike was first announced in 2013 and was met with a mixed response. The biggest controversy not that the Harley Davidson Street 750 was the first new model in 13 years, but the fact the Street range would be manufactured in HD’s Bawal, India factory.

Admittedly Harley Davidson were quick to retract this when it came to Street 750 models being produced for the US market where they claimed they would still be manufactured in the Missouri, US plant. For the rest of the world however, the Street 750 would be produced in India.

Should the outraged look beyond the surface they would see not just HD but Indian, Triumph and several more of the big institutions all have factories in Asia. Dare I say that some of the parts for HD’s big twins have been outsourced from the US for many years.

Controversy aside, Harley released the news of the Street 750 at the EICMA show in Milan; shortly after a Street 500 would be announced (that was not available in the UK) and a new edgier Street Rod version of the 750 would also later follow.

The only difference between the Street 750 and Street 500 is the engine capacity.

Is the Harley Street 750 Discontinued?

As of 2020 the Harley Davidson Street 750 and variants are all discontinued. For Europe the entire Street range has been discontinued including the Iron 883 and Forty Eight. This decision was mainly down to the fact that Harley Davidson couldn’t meet the Euro 5 regulations.

For now, Harley Davidson has only three models in the Street line for the US market; this consists of the Iron 883, Iron 1200 and Forty Eight.

Ride Apart “So, what now? We reached out to Harley to inquire about potential replacements for the Streets.  As things currently stand, the role of “the entry-level” bike is now bestowed on the not-so-entry-level Iron 883.”

I would suggest that Harley won’t allow the entry-level spot to be unfulfilled for a long period of time. There is still a growing need for smaller capacity machines and HD has a big following in Asia so they will want to keep their presence felt there.

When you look at motorcycle trends this year, small bikes are definitely on the takeover, with the likes of Royal Enfields Meteor. Rumors of Harley and Triumph bringing out 400cc machines in the near future are also swirling, with prototype images having been leaked.

Although HD are yet to release any information about replacing the Street 750, or indeed confirm a 400cc model, I would not be surprised to see this soon. With the new Revolution engine on the horizon and the Sportster S with the new liquid-cooled engine due for imminent release, I think there are a lot of changes coming for Harley Davidson and they are more ahead of the game than some people may think.

The Street 500 and 750 were supplied to Harley Davidson riding schools in the US for new riders to learn on, and despite the model being discontinued in 2020, HD will continue to supply the bike for this purpose.

Is the Harley Street 750 a Good Bike?

Harley Davidson says about the Street 750:

“This is the right bike for urban riders looking to express their independence, commuting and manoeuvring through city traffic.”

Upon their release the Street 750 was met with mixed reviews with some critics praising the accessibility and simplicity and others just didn’t think it gave a fully authentic Harley Davidson experience. The bike was immediately very popular with riding schools and it became the learners choice.

MCN gave the Street 750, 4 out of 5 stars on their overall rating scale. “During 2016 MCN ran a Harley Davidson Street 750 for a year as a long-term test. Our reviewer Alison Silcox found it slightly uncomfortable until she began bolting on the modifications. She covered over 8000 miles on the bike, so is in a great position to comment on its durability.”

After the long term test the bike was praised for its quality parts, durability, build-quality, value and ability to be modified to suit individuals.

Warren from Motorcycle Paradise test rode a Street 750 for a week in UAE and the review is interesting as it is a completely neutral opinion:

“Despite just 750cc it performs very well, the engine is silky smooth and revs freely, fueling was spot on”

“Two things that were cheap, the mirrors and the gas tank cap which is removable type like found on Chinese bikes and always difficult to get on and off.”

The main thing that came up across many reviews and comments I scrolled through was that the bike is somewhat uncomfortable especially for those who are a bit taller.

I am 5ft 8” and when I looked at the Street 750 I was expecting the position to be similar to that of a Triumph Street Twin, knowing that it is built to be upright, ergonomically relaxed etc.

The position is upright and fairly neutral but the pegs are at a bit of a weird angle on top of the exhaust causing your knees to either be uncomfortably high or sticking out either side of the tank. I would imagine anyone taller than me would struggle for any significant length of time.

However, it feels very lightweight, very balanced and handles exceptionally well. For all intent and purposes that Harley Davidson produced the Street 750 for, it does the job well.

How Fast Does a Harley Street 750 Go?

The Harley Davidson Street 750 has a claimed top speed of 110mph. Real world reports however, tend to suggest 90mph is the best you will get out of the model, which is more than enough for road riding conditions.

The Harley Davidson Street 750 was not meant to be a racing machine and was mainly built for city riding, with back roads on the weekend. It wasn’t built for touring, long-distance or even many highway miles.

However, it has effective all round performance that most riders could make the most of when they got to grips with the bike. A decent amount of torque means the power range is broad and 6 gears keeps the power on tap when you need it.

How does the top speed compare with competition from other manufacturers:

Cycle World claims the Street 750 can do 0-60 in 4.6 seconds and the standing quarter mile in 13.69 seconds which is pretty impressive.

How Much Does a Harley Street 750 Cost?

Harley Davidson dealerships in the US and UK still have some Street 750 stock left over from 2020 and they are brand new bikes with prices starting from $7,599 and £6,195; the longer these hang around however, the more likely stock will start getting reduced pretty quickly.

Dealer prices in the US for second hand bikes seem to be between $4,999 and $7,999 with model year and mileage being the key points that cause the price difference. One Harley Davidson dealer in Montgomery is advertising a 2017 model at $14,301 which seems crazy high but you can check it on Cycle Trader.

Dealer prices in the UK for second hand Street 750’s on average are between £4,500-£5,200, Autotrader has several available and all sit within this sort of price range. Average miles on the bikes are about 5,000 miles.

The increase in prices is likely down to the fact the model has since been discontinued and as with most things people want what they can’t have. I would suggest that these slightly inflated prices will settle down again in the near future.

To give you an idea of prices I’ve compared a few similar bikes (comparison based on new model prices):

It seems Harley Davidson were on to the right concept with the Street 750. However, it is possible they may have just missed the mark slightly with the delivery, particularly as it pertains to the US and European market.

By 2018 in India the Street 750 and Street Rod were two of the best selling motorcycles on the market with the Street Rod only being displaced to 3rd position by the release of the Kawasaki Vulcan S.

The bike won’t be for everyone but for new riders the Street 750 provides a pretty solid choice and with the prices on the used markets, it is a bit of a bargain.

Regardless of what any hardcore HD purists say, if you buy a Street 750 then your first big motorcycle will be a Harley Davidson V-twin and that’s pretty damn cool. 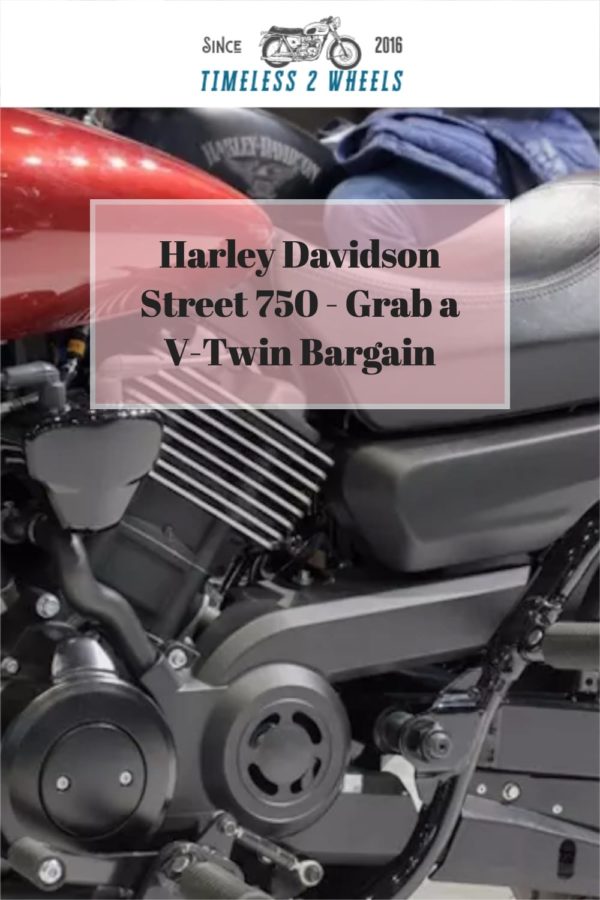