Yamaha were late to the 4 stroke party. Around the time Honda were basking in the glory of the all conquering four cylinder CB750, Yamaha were just introducing their first ever 4 stroke motorcycle, the XS-1. It was a twin cylinder 650 designed as a cheaper alternative to the Triumph Bonneville, BSA Gold Star and other British twins of the 1960s.

Whilst Honda, Suzuki and Kawasaki did battle over who could produce the next, best, fastest inline four cylinder super bike, Yamaha continued to innovate their 2 stroke dirt bikes while sticking with their 4 stroke twins. It would be 1978 before Yamaha caught up in the superbike arms race.

Since then they’ve made up for lost time producing some fantastic four stroke motorcycles as well as creating the father of adventure bikes. Here’s 9 iconic Yamaha 4 stroke Motorcycles…

The FZ750 was Yamaha’s 1984 venture to try and challenge the norm. The very first Yamaha 4 stroke supersport bike would feature 20 valves (five per cylinder) rather than the standard 16. The initial reception was negative, with critics declaring that the whole exercise was pointless and would offer no advantage over the standard setup.

On its release the following year, the critics were quickly silenced as the FZ750 produced impressive performance figures and outstanding handling, akin to that of a bike with an alloy frame (Despite Yamaha keeping  a steel frame).

Even with the raving reviews from the testers, the FZ750 failed to grasp the public’s attention, it sold in steady numbers but never became the supersport pack leader Yamaha had placed their hopes on.

Yamaha would go on to make several updates to the FZ750 over its production life with its most notable change being the addition of full fairings to match that of their rivals in 1986.

In 1994 ten years after the release of the FZ750, Yahama was, once again, looking to prove they could change the direction of motorcycle technology. This time with the GTS1000. Hoping to create the ultimate high-tech sport-tourer, the GTS came with a modified 1002 cc 100 bhp engine from the FZR1000 (still with the 20 valve technology stemming from the FZ750), single-sided swingarm, electronic fuel injection, three-way catalytic converter, six-piston front-brake calipers along with ABS.

Yamaha themselves quoted it to be “The most sophisticated road-going Yamaha motorcycle ever produced.”

Despite the plethora of technology, it was the unique front-end that Yamaha was counting on to draw the public interest. It was the first Yamaha, and only mass-produced bike at the time, to feature a single-sided front swingarm suspension. (Bimota had previously used a forkless system on the 900 Tesi, however only a few units were ever built).

Unfortunately, the GTS had an issue that held it back from becoming the ultimate touring machine. It had taken them four years to develop the bike and as a result of the time it had taken, a premium was placed on the retail cost, making it – at the time – £1,000 more expensive than the BMW K1100RS, £3,000 more than the Kawasaki ZZ-R1100D and £3,500 more than their own FJ1200.

This would ultimately steer the public away from the GTS and spell its downfall.

During the 70’s, the dual sport market was being dominated by 2 stroke machines and the release of the 4 stroke Yamaha XT500 in 1975 was a step into the unknown. It was also one of the first Yamaha 4 stroke motorcycles and a move into new territory.

Powered by its 499 cc air-cooled single-cylinder 4 stroke engine, the XT500 brought something new to the dual sport market, reliability. This opened the big single to wider markets, with consumers -and racers in particular- seeing the potential for a reliable dual sport machine that didn’t require heavy modification to work in rough conditions.

As such, the XT500 went on to claim several victories and the overall titles of the 1977 and 1978 500cc Motocross World Championship. It also took part in the inaugural Paris-Dakar Rally in 1979, taking both first and second place.

With proven pedigree in the toughest race on the planet, many long distance travelers began to see the benefits of the XT500. Adventure riders at the time would normally take a modified street bike and end up having to maintain and repair it repeatedly as the terrain punished the bikes beyond their design.

The XT500 gave adventure riders a new outlook on their long distance antics. They were now able to maintain a decent speed on highways and winding roads, yet still tackle the more challenging landscapes that occur when roads are but a distant memory.

After the success of the XT500, Yamaha followed up on their 4 stroke single concept in 1978 with the road-biased SR500 (They also released the SR400 alongside it for their home market in Japan).

The SR500 used a slightly modified version of the large single-cylinder engine from the XT500 with the downtubes of the motorcycle’s frame serving as the engine’s oil reservoir and cooling system. This was where the similarities between the two ended.

After three years learning the shortfalls of the XT, riders had continually complained about how difficult it was to start. To overcome this issue with the SR500, Yamaha had installed a sight glass on the right side of the cylinder head indicating the optimal cylinder position to start the bike. A decompression lever had also been installed on the left handlebar to make kickstarting even easier.

With just 33bhp the SR500 was an everyday machine designed to travel at its own pace, unlike the higher speeds of the bigger and brasher British singles of the time. With this in mind, the British public failed to grasp the concept of Yamaha’s latest road machine and shunned the SR500 in place of their traditional big singles.

Despite the UK market not taking to the SR500, it proved extremely popular across mainland Europe, notably Germany.

Before the SR500 was dropped from the sales list in 2005 (due to emissions requirements), almost 40,000 Yamaha SRs were sold in Germany alone over its 27 year reign.

In 1999 Yamaha introduced the XJR1300. Replacing the short-lived XJR1200, it came with a stiffer chassis, upgraded suspension and a larger engine capacity 1251cc compared to 1188cc. Alongside the stock XJR, an SP model was launched as well, sporting Ohlins shocks and a bright, race-inspired paint scheme reminiscent of the 80s superbikes.

The XJR1300 proved to be a big hit and immediately gained a loyal following who enjoyed the big Yamaha’s smooth handling and ability to eat up miles across tarmac.

Several upgrades would adorn the XJR over the coming years including a four-into-one exhaust system, new wheels, an immobiliser, a bigger catalytic converter, new clocks and fuel injection until 2015. It was then Yamaha decided the XJR1300 needed a bigger change to it’s looks.

Attempting to cash in on the retro fad at the time, Yahama redesigned the fuel tank (reducing its capacity by 6.5 L), seat unit, front forks and ‘tidied up’ the rear end of the bike. The die-hard fans of the XJR were discouraged by the direction Yamaha had taken the bike in and sales were not as high as Yamaha had predicted.

Much like the original 1200cc version this retro styled XJR was short lived, it was last sold in 2016 when it was discontinued due to new emissions laws.

By 1978 Yamaha was falling behind their competition in one specific area: they were the only big bike brand to have not yet launched a bike with an inline 4, 1 litre engine. Yamaha really pushed their development to produce the XS1100, or XS Eleven as it became known, and not only matched the 1000cc engine size of Honda, Kawasaki and Suzuki but surpassed it by 100cc.

This 100cc more capacity made the XS1100 faster than its rivals, and some clever engineering helped push the XS1100 even further. The XS ran off Yamaha’s first four-cylinder engine which had been developed with a complex polyspherical combustion chamber. As is usual for performance engines, It’s intake and exhaust valves were placed across from each other with a centrally located spark plug. However, by using six separate high-tech machining processes Yamaha were able to use lighter and slightly crowned pistons without any of the normal drawbacks.

When put to the test by Cycle magazine in January 1978, the XS1100 achieved the world’s first sub 12-second quarter mile for a motorcycle with it’s best run at 11.82 seconds.

Also known as the Yamaha Road Star in America, the XV1600 first came onto the market in 1999 and gained overnight popularity with custom bike builders in America. Its robust, large capacity engine, along with its ease of customising saw a steady flow of the XV1600 from the factories to consumers over its 15 year production life.

The XV1600 remained unchanged for another four years when electronic fuel injection was introduced to the bike along with several new variations and extras to choose from. By now Yamaha had realised the popularity of customising the XV and thought to create offerings of their own.

The Silverado trim package included studded saddle bags, a back rest, driver and passenger seats with studded edges, and a cruiser-style windscreen. The Midnight package offered the same and additionally came with a blacked out engine and metalwork. The ‘S’ package was the final one available, again sporting the same extras as the Silverado package but with more chrome pieces.

The YZF1000R or ‘Thunderace’ was a parts bin special, designed to fit into the market in an attempt to steal some of the sales from the Honda Fireblade until the R1 was ready.

Released in 1996, The YZF1000R was basically a YZF750R with the engine from the FZR1000 shoehorned inside. It managed to trump Honda’s Fireblade for power by 15 bhp but came in 28 kgs heavier! This added weight affected the Thunderace’s acceleration and handling meaning it could never really compete on the same level as the Fireblade. However, when moved from the supersports category into the sports tourer it makes a lot more sense.

Over the years many sportsbikes have reached for the stars and fallen short, only to be swept aside and relabelled as a sports tourer. However, with their uncomfortable riding positions and poor pillion amenities, they fall short here as well. The YZF1000R managed to break this pattern with both rider and pillion positions being far more comfortable than they appear, allowing you to comfortably watch the miles roll by without needing a trip to the chiropractor afterwards.

Despite never making it to the front of the supersport pack, it held its own until the YZF-R1 was launched in 1998 and went on to redefine the sports bikes of the 90s.

The Yamaha R1 has been the company flagship ever since they unveiled in 1998. Launched during a time when the 900 cc supersports were ruling the racetracks and showrooms, it was the R1 that ushered superbikes into a new era as they approached the millennium.

The R1’s engine was the same 998 cc EXUP found in the FZR1000 or Thunderace refined to produce 150 bhp vs 145bph, but this was where the similarities ended. Repositioning the gearbox mainshaft above the crankshaft rather than inline, allowed the engine to shed weight and become much more compact. This in turn meant a shorter frame and longer swingarm whilst maintaining the same wheelbase, ultimately increasing traction at the rear wheel. The result? A lightweight, fire-breathing superbike that could turn on a pinhead.

Kunihiko Miwa, Yamaha’s Head of Research and Development at the time, was the architect behind not just the R1, but the R6 and R7 in turn. His ‘no-compromise’ attitude to making the ultimate sportsbike gave us the machine that not only changed superbikes in the 90s but gave the world of motorcycles one of it’s all time greats. 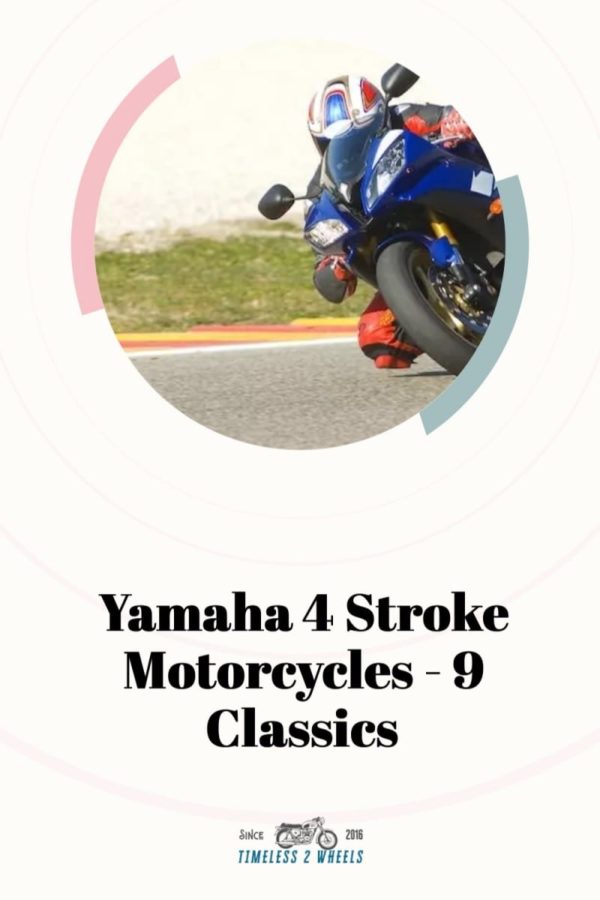