How many motorcycles can wear as many hats as this sweet little v-twin?

At this point I consider owning an SV650 a right of passage for any lifelong motorcycle enthusiast.

Whether you’re considering the SV650 for your first motorcycle, your first track bike, or your next custom project, you’re in the right place. Here’s everything you need to know about the motorcycling community’s old faithful.

Although all years of the SV650 share the beloved 90-degree 645cc V-twin engine, there were some notable updates to both the engine and the bike itself over the years. Here are the fast facts for the evolution of the little twin.

Suzuki’s original SV650 is easily recognized thanks to a few tell-tale exterior differences.

Most notably is the use of a thick rounded/tubular trellis frame rather than the angled aluminum or narrow steel designs that followed.

Aside from that the most important thing to know about the early year SV650’s is that they’re the only ones lacking fuel injection. Up until the 2003 model year, all SVs came equipped with twin Mikuni carburetors.

This is the bike most people are referring to when they talk about the SV650.

No meaningful changes were made throughout the second generation run outside of obvious cosmetic updates. Certain paint colors are unique to single model years. Frames and swingarms were raw aluminum in 2003/2004, then switched to matte black for the remaining years.

The Suzuki Gladius (later renamed the SFV650) is widely considered the bastard child of the SV650 family.

Technically it isn’t an SV650, although the trellis frame, 645cc V-twin engine, and roadster styling beg to differ.

For all intents and purposes, a Gladius is an SV650 with an unpopular modern styling update and some minor internal engine revisions to the camshafts and intake/exhaust tuning.

The Gladius was largely a sales flop and Suzuki replaced it with the current generation of SV650 in 2017. While it might not share the same timeless style as the SV650, I wouldn’t rule the Gladius out of your search.

Its engine improvements made a noteworthy improvement to low RPM fueling, and unlike the current generation of SV650’s, it’s front forks retained their adjustable preload settings as well.

Although this article is mainly focused on the SV650 as an inexpensive (used) bike that’s ideal for new riders, I’d be remiss if I didn’t get a quip in about the redesigned third generation as well.

Classic roadster styling is back for this generation, and a “neo-cafe” variant (the SV650X) also showed up beginning in 2018.

You’ll spend a little more money on the newer model bikes, but you’ll get some perks too like revised throttle bodies/exhaust/air intake (5 extra horses), improved throttle response, and a “low RPM assist” which helps new riders keep the bike running when leaving stop lights and putting around parking lots at low revs.

Short answer? Not much.

“SV650” is the designation for the  roadster styled bike with no fairings. This is what most of us think of (and would spend our money on) when we hear Suzuki SV650.

“SV650S” models wear a quarter fairing, or a “sportbike style” nose fairing without any belly pan or side plastics. It’s the exact same bike as the SV650, but with extra plastics, higher footpegs, and clip-on handlebars.

Starting with the 2008 model year, an “SV650SF” version was also offered. This is the fully faired version (the one that looks most like a conventional race replica). Again, exact same bike with more plastic and a more aggressive riding position.

I was fortunate enough to own an SV650 from 2017 to 2019. I bought it as an inexpensive weekday commuter, but ended up taking it out damn near every weekend too.

A few things stand out to me from my time with the bike:

First, it was the only motorcycle I’ve ever purchased with a salvage title. This is normally something I would never do, but it speaks volumes to the SV650’s reputation for reliability that I was willing to make an exception to the rule.

It gave me zero issues in those 9,000 miles of long highway commutes, weekends in the canyons, and around town hooning. I even loaned it out for two weeks at one point because why not, it’s an SV650.

That’s the kind of description I’d expect to see of a Honda Rebel or maybe a Yamaha XT 250. Not a sporty little naked V-twin fun motorcycle.

And that’s the SV650 in a nutshell: Simple, reliable, cheap, and user-friendly to the point you never worry about it, yet so sporty and fun you can’t resist racking up the miles on it either. How many bikes can you say that about?

There’s just never any question as to whether or not it’s going to fire up when you push the electric starter.

Once it’s started, there’s no question you’re going to enjoy whatever comes next.

The engine makes plenty of torque from as low as 3,000rpm, and although it’s got no business getting anywhere near the indicated “11,000 rpm” redline, it cranks out the goods effortlessly until 9,000rpm or so. The SV650 is more than happy cruising at 80mph on the highway all day, and will move a lot faster than that…. On a closed course…

Of course once that happens, you’ll know it’s time to move on to the second half of SV650 ownership: Modifying it.

Half the fun of owning an SV650 is upgrading it as you grow into it. There’s a ton of community support for the SV online, and no shortage of easy do-it-yourself upgrades like GSX-R suspension swaps and bolt-on power parts.

Those are some downright respectable numbers for a lower displacement sport/standard sort of bike. Particularly good for what is often referred to as a “beginner” bike.

Yet it is absolutely a great beginner bike, mainly due to the engine’s characteristics rather than its performance numbers.

What’s great about the small V-twin is that although it’s capable of some commendable numbers when you really push it, the engine is about as mellow and forgiving as it gets in the lower half of the rev range.

That’s ideal for a beginner because it means you have to be deliberately aggressive with the SV650 to get any sort of “aggressive” behavior back out of it.

It also makes it the ideal bike to “grow into” because as you get more confident, the motorcycle will continue to deliver what you ask of it.

Combine that with an engine that regularly lasts 80,000 miles or more, and you’ve got all the time in the world to get comfortable on your SV650.

Speaking of comfort, the SV sports a seat height under 32 inches (perfect for new riders who want to flat-foot their motorcycle), a relaxed riding position, and a relatively low 430 pound weight, which means you’ll be as comfortable learning to ride on an SV650 as anything else out there.

Known Issues Of The Suzuki SV650

This motorcycle is so easy to own and maintain this section feels a little silly, but there are actually a few quirks to be mindful of if you’re considering ownership.

For first generation bikes, obviously you’ll want to pay attention to the health of the carburetors and how smoothly the engine runs and idles. The carbs on these bikes are reliable Mikuni units and will function flawlessly for thousands and thousands of miles as long as the bike isn’t neglected for extended periods.

Aside from that, first gen owners also want to be mindful of any performance upgrades inherited from previous owners (aftermarket exhaust, air filters, etc). Performance parts are great, but if the carburetors haven’t been retuned/rejetted to accommodate the upgrades, the bike won’t run as it should.

Oil starvation is a known issue, but it only occurs if you wheelie the bike for extended periods of time. Short wheelies here and there are fine.  Long stand-up wheelies down the interstate or repeated wheelies in general can starve the front cylinder of oil and cause catastrophic failure. Needless to say, the SV650 isn’t a great candidate for a stunt bike.

Water retention in the front cylinder head is also common, and leads to the dreaded “SV325” syndrome. It isn’t a major problem, but it certainly feels like one when it starts happening. Basically the spark plug hole has a very small drain that gets clogged easily because the front cylinder catches tons of dirt and moisture as you ride down the road. Once that drain is clogged, water pools around the front plug, and eventually it corrodes to the point the plug no longer fires. Regular cleaning of the drain port and packing dielectric grease in the plug wire solves this issue.

Pound for pound the SV650 has to be one of the smartest purchases a new motorcycle owner can make.

They also happen to be ridiculously easy to find thanks to their substantial production run.

Assuming you’re shopping used bikes on a budget, chances are you’ll be looking at a first or second generation SV650.

Both are great bikes, but no one in their right mind buys a carbureted motorcycle if they don’t have to, so I’d recommend narrowing your search down to 2003-2009 models.

Granted, the first generation bikes hold a certain unique appeal. Fans of the old TL1000S “widowmaker” will no doubt prefer the derivative styling of the tubular frame and rounded quarter fairing. First gen bikes are also more likely to become collector’s items due to their shorter production run and fewer surviving examples.

Now while there are a ton of SV650’s for sale out there, the overwhelming majority of them have lived tough lives. That’s an unfortunate side effect of inexperienced ownership and club racing popularity.

Still, there are some well-loved and well-kept SVs out there too that are ready for their next owner.

I wouldn’t be too wary of mileage so long as it’s somewhere under 25,000 miles or so and the bike you’re looking at has quality maintenance records.

I would be wary of any crash damage, salvage titles, track bikes, or bikes that look like they’ve spent a little too much time on the rear wheel.

As far as prices go, there’s definitely a wide range out there.

Personally, I would recommend budgeting between $2,500 and $4,000 depending on just how clean/low mileage you’re aiming for. Second generation SVs used to go for $3,000 or less all day, but the current used motorcycle market is insane so good luck.  This fully-faired $3,500 2008 model is about the best I can currently find, but boy is it clean…

With that being said, if you’re already considering spending $4,000, the third generation SV650 is starting to pop up more frequently on the used market, and often starting around $5,000 like this 2017 model with only 2,200 miles.

Updated styling, updated engine, and updated electronics for an extra $1,000? AND you don’t have to stoop to owning a Gladius? Sounds like a pretty sweet deal. 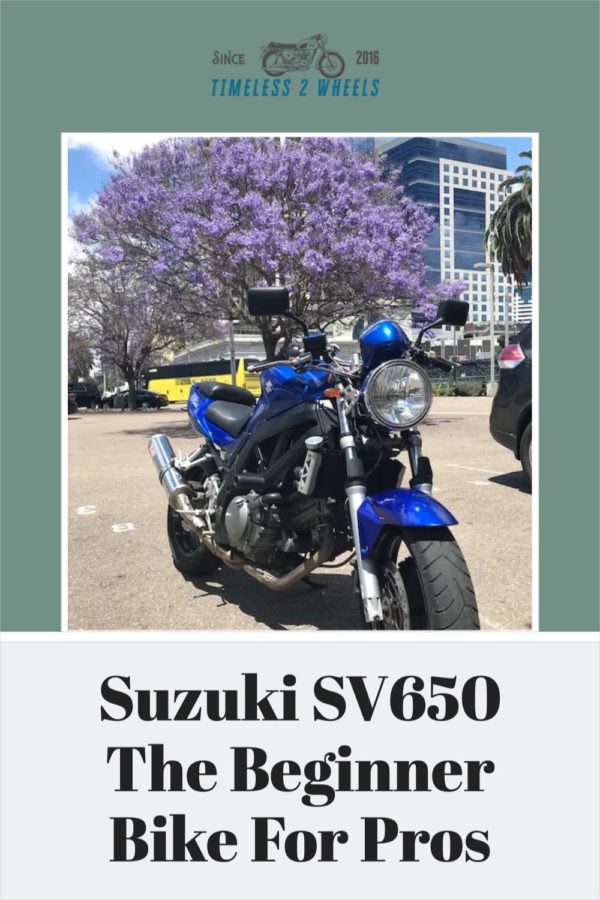