A few years ago Suzuki quietly dropped the Suzuki Boulevard S40 from its lineup but that is not to say there are no 2019 models left in dealers or indeed a healthy used market to dip into.

We are going to have a look at the Boulevard S40 and see whether we think it makes a good beginner motorcycle as well as a commuter.

Let’s kick things off with a review.

The Savage was the first cruiser from Japan and being a big single-cylinder, Harley fans could not critique it as being a Harley impersonator.

The model known as the Savage was renamed in 2005 as the Boulevard S40. Suzuki had given all their cruisers at the time the overriding Boulevard name and gave them each different letter/number assignments to account for different engines/styles etc.

However, changes have been mainly cosmetic to the model with the exception of moving from a 4-speed gearbox to a 5-speed.

30 horsepower and 42Nm of torque powering it means it is a fairly un-intimidating model for new riders and is perfectly manageable.

Raked forks, and skinny front wheel are the key components that give it the American Chopper feel that Suzuki strived for. It looks like a big bike without the fear-inducing power of many popular big V-twins.

For many the Suzuki Boulevard S40 represents the ultimate expression of cruising, a thumper of an engine that will run all day with a low-maintenance belt drive to get you where you are trying to go.

It is also incredibly lightweight for a cruiser and this is part of the reason it is so accessible for new riders, those returning to riding after many years and those that just want something that will run all day without giving them any grief.

It is perfect for cruising in town, making it an ideal commuter but also happy to take you riding the backroads in the country.

The engine is not especially powerful so long highway trips may be somewhat uncomfortable due to the level of vibrations stemming from the engine. Being super light on the highway you may find that you can get pushed around a bit which could be unsettling for learner riders.

Ergonomically, the Suzuki Boulevard S40 is reportedly best suited to those under 6-ft tall. Above that height and you may end up feeling somewhat cramped although adjustments could be made with different handlebars and foot pegs to accommodate for this.

Although after-market accessories are somewhat limited though as the bike is targeted at new riders with the idea that they will soon upgrade rather than spend a lot of money on modifying the S40. If it has stolen your heart however, a custom shop will be able to fabricate and supply parts to help you build your perfect and most comfortable bike.

Comfort is something that many owners comment on when it comes to the Boulevard S40, this is rare when it comes to stock bikes in general let alone those aimed at novices. However, the seat and riding position are only mentioned in glowing terms and this is great as being uncomfortable can be a massive distraction when riding.

The brakes are more than adequate in the form of a disc brake up front and drum on the rear, for the power the bike puts out there is more than enough stopping power to keep a rider safe.

Twin shock suspension again seems to be acceptable by owners with few complaints of bottoming out or it being too stiff.

The handling as a result of all this is simply excellent, intuitive and easy to manage. Although named as a Savage it appears the model is far from it and is very responsive.

The bike is very basic and minimalist with costs being cut to be budget friendly. Lack of chrome, muted paint schemes and lack of tech all are clear indicators of this. However, it does the job it is intended for having been sliding under the radar for 33 years.

“All in all, the Suzuki Boulevard S40 is a pretty unique ride just begging to be customized. Our devious minds are already imagining a vintage Matchless G80 CS-style scrambler interpretation.”

And an owners review:

“Great first bike, not too powerful, great gas mileage – averaged about 60-65mpg, wicked light. If you are capable and confident though I may suggest something stronger like the Shadow or VulcanS. My gripe was that the vibration was numbing on longer highway trips.”

How Much is the Suzuki Boulevard S40?

That represents fantastic value for money but if you are not too bothered about a new S40 it is well worth looking on the used market.

Depending on the year, prices start around $2,499 like this 2012 option on MotoHunt.

Cycle Trader is a great source to seek out bikes near you and lists both private and dealer sales. You can get a great deal on a 2018 model such as this with just over 1,200 miles on the clock (so basically just run in) which is priced at $3,999.

It would seem for a good condition used model prices are on average around $4,000 but you can definitely get an older model in great condition for under $3,000.

Is the Suzuki Boulevard S40 a Good Starter Bike?

The Suzuki Boulevard S40 is aimed at new riders and everything about it has been built with that in mind. With so little having changed since its release in 1986, Suzuki created a cruiser that fulfilled its purpose from the get go.

Ergonomically it’s great for new riders, having a low centre of gravity and even the shortest of riders should be able to get both feet flat on the ground.

The feeling of being in control and knowing you can put your feet down when practicing those slow-speed maneuvers is very comforting when you are learning. Being super lightweight the Suzuki Boulevard S40 doesn’t feel intimidating if it begins to fall on either side while stationary, most riders should be able to flat-foot and get it straight again.

The upright position gives full-command of the road which is confidence-inspiring, and the wide pulled back bars give a relaxed position that allows for the bike’s handling to shine through.

The timeless single cylinder design and rock solid reliability means that many owners will be enjoying their motorcycle long after starting their riding journey. Being styled in such a way that you won’t feel like a novice when out riding but immediately you get the feeling of being a ‘real biker’.

Comfort is also a big part in why it is so great to learn on. It means you can stay in the saddle longer and get those extra miles under your belt. If there are slight niggles when learning to ride, like leg cramps, or an uncomfortable seat it can be distracting and take the focus away from really getting to grips with the riding experience.

So this is a big plus on Suzuki’s part for producing a cruiser that is comfortable no matter how long you want to ride it.

Overall from reading other reviews and from owners the Boulevard S40 seems to be an excellent choice for a first motorcycle, for those that want a cruiser style.

Price point as well whether new or used the model is reasonable and on par with many other similar starter bikes out there. It is a machine that you could certainly grow into and not one you would necessarily be in a rush to move up from.

As a single cylinder cruiser the top speed is pretty much irrelevant and if you need to ask then this is probably not the motorcycle for you. However, seeing as you asked, the Suzuki Boulevard S40 can get the needle pushing the 90 mph mark.

Is the Suzuki Boulevard S40 reliable?

Absolutely, like most Japanese motorcycles the engine is pretty much bomb proof. Besides, with a production run of 33 years any weakness would have come to light decades ago!

Having read about the Boulevard S40 and being a big fan of a single-cylinder engine I would be keen to get my hands on one and give it a go. It’s relatively small capacity and low power output is right up my street. 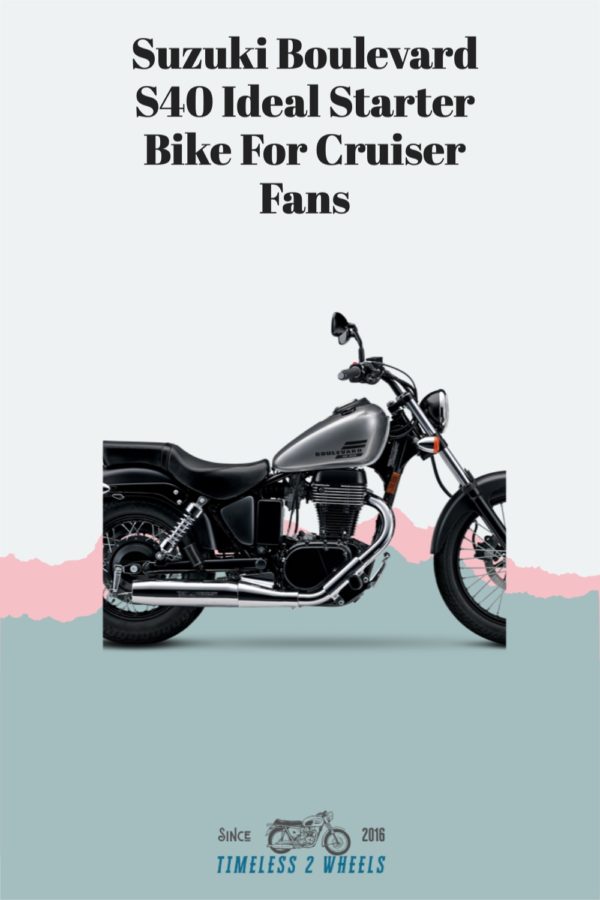