When the new and updated Honda Monkey was re-introduced in 2018 I partially thought the Japanese giants had lost their mind.

Then I remembered the success of the Grom and how I was watching all the cool builds and crazy stunt videos on YouTube and wanting one so bad.

Of course a new Honda Monkey made complete sense!

It is ridiculous, but also so damn cool at the same time and the styling is throwback retro with a modern twist.

I was doing a camping trip in Wales and a guy on a Monkey followed me for a good 10 miles; he was loaded up for camping, looking like a clown on a mini-bike but I can tell you he loved every second on that Monkey and I loved riding with it.

So let’s take a bit of a deeper look into the Honda Monkey, starting with a review.

The Honda Monkey first appeared as a children’s ride in Tama Tech amusement park in Japan. Honda developed a 49cc chunky, no-suspension, square framed toy bike for Tama Tech that proved so popular as a bi-product of this venture they went on to put into production a road-going version.

In the 70’s the Monkey thrived, detachable forks meant it could be loaded into the trunk of a car, it had a styling revamp, with a teardrop tank and chunky wider tires.

Many RV owners had one strapped to the back of their vehicle so that once parked up they had the bike for getting around on.

The 49cc Monkey continued in various guises for 60 years, with Honda finally retiring it in 2017.

It was just a year later that the Monkey was brought back into production and the world went mad for it. A bigger four stroke, air cooled 125cc engine, full clutch and four speed transmission, slightly larger frame for more practical riding, completely retro nostalgia inducing styling with modern features like ABS.

What a move Honda made with updating their mini motorcycle.

For the 2022 model Honda has gone that step further with the addition of a 5 speed transmission to aid the ability of the bikes cruising prowess, and it has been adapted to comply with Euro 5 regulations.

It comes in either Pearl Black or Banana Yellow.

It has a wet weight of just 104kg, a wheelbase of 1,145mm and seat height of 775mm. With those figures it is going to suit the majority of bikers with the exception of those who are quite tall, at a certain point you are just going to be cramped and find it awkward to ride.

For shorter riders however, it is a perfect height and weight. I see so many people online looking for a small motorcycle to learn on. Well it may be unconventional but from a physical spec standpoint, it is pretty perfect.

The Monkey comes with USD forks, twin-shocks rear suspension, 12 inch wheels and a steel frame ready to handle some rough terrain if needs be.

There are not too many motorcycles that instantly put a smile on everybody’s face, whether you want one or not, it is likely that you will light up around the Monkey just for its purest representation of riding freedom.

It is applicable across generations too from guys who had an original Monkey in the 70’s to young riders today that are into all things vintage and retro.

Peanut tank, mini-ape bars, 12” chunky tires, big padded seat and swept up exhaust with chrome heat shield and fenders all keep it in line with the originality of the machine.

Performance wise you could see an estimated 157mpg with a 1.23 gal (5.6l) tank. That is a lot of miles before needing to re-fuel making the Monkey a perfect around town machine.

Peter Jones wrote of his first impressions in Cycle World “The immediate riding impression of today’s Monkey is one of pure, visceral, monstrous fun. It’s a barrel of let’s-do-it-again fun,” he wrote. “It’s a motorbike that makes every rider a kid.”

In a world of pressure, battling traffic, providing for family, money-driven goals, need to work harder, and all the world’s disasters that seem to be coming thick and fast, who doesn’t want to check out now and then and be a kid again?

I do and Honda is helping us do just that.

Is the Honda Monkey Street Legal?

The Honda Monkey is absolutely a street legal mini-bike. You can take it and ride along with your buddy on a CBR600RR. You might look crazy but it is legal to do so as long as you have the appropriate licence, insurance etc..

Is the Honda Monkey Good Value For Money?

Having looked around at various used marketplaces, the Honda Monkey holds its value very well (specifically the re-introduced model, 2018 onwards).

You are getting quite a lot for the money:

I think these bikes will continue to hold their value in the coming years, with owners selling them on once the novelty has worn off to somebody new to appreciate them.

Furthermore, the ‘new’ model pricing is on par with many bikes in the 125 cc category aimed at learners and so it offers an alternative style at the same or less price for this category of motorcycle.

Let’s get completely real, the Honda Monkey is not a bike built for speed or performance. Its sole purpose is to put a smile back on peoples faces and remind everybody that riding motorcycles are fun.

The official stats are 9 horsepower and 11Nm of torque, with an overall estimated top speed of 65mph.

You may need to be on a really long straight flat road and to use the gears to get up there; or on a hill heading down with a bit of wind power behind you to get up or even above that figure.

Finding a classic original Honda Monkey is like searching for gold dust.

Many were used and abused at the time. As was the very nature of the bike, it was treated like more of a toy, than a precious artefact to be preserved for years to come.

Car and Classic have one model that has been fully restored and is claimed to be in mint condition. The asking price for this is £8,495.

There are several models on the market that are made up of various parts from other bikes including one I saw with a Lifan Chinese 125cc engine in it. To me this just seems a shame, ruining the integrity of a classic bike. For the 3K asking price you are better off spending the money on a brand new model.

This limited edition Monkey R, was a one-year run of sports models and it was the coolest example I could find and well worth the $5,999 asking price. You can check it out on Cycle Trader. 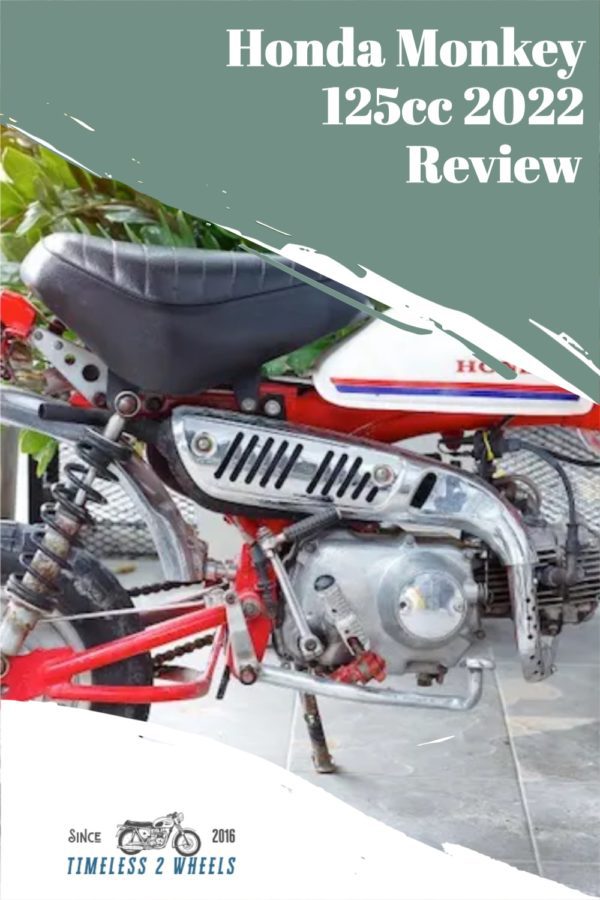