By the end of 2013 Ducati introduced the Panigale 899, a middle-weight version of the bigger 1199 which was the first in the Panigale line.

The new model replaced the Ducati 848 and stood to be the leading superbike of the middle-weights with brilliant track performance like the bigger bike, but with more riding usability and comfort for use on the street too.

It remained in production until 2016 when it was replaced by the 959 Panigale. This was largely down to Ducati needing to produce a bike that would meet the new Euro 4 regulations.

While the bike only had a short life span, it made its mark, and is widely considered one of the best sports bikes in its class ever produced.

It has high owner ratings including a reputation for being reliable. Yes. A reliable Ducati.

Without further ado let’s dig into the Panigale 899.

“You used to be able to count the number of truly great ‘sportsbikes for the people’ on one finger: the Suzuki GSX-R750. But in 2013 another one arrived: the Ducati 899 Panigale.” MCN

The 899 Panigale was a bike produced that everyday riders could utilise on open and closed roads. Both press and public were in love with it and they remain so to date.

When replacing the 848 Ducati knew they needed to take a step forward in both design and performance in order to capture the public’s imagination.

They did just that. Increasing the engine capacity and throwing a host of rider aids at the bike as standard, let alone the new sleeker styling and more comfortable ergonomics.

The engine is a stressed member of the frame and creates more power than the previous 848 and more torque.

The torque is produced right through the rev range so you have enough power in any gear to get you out of trouble… or into it. It accelerates hard but you won’t feel like you’re struggling to hold on like you can with bigger machines.

Wet, Road and Race mode all affect the power delivery differently to suit your conditions. For example while in Wet mode, the power output is cut, traction control and engine braking are automatically adjusted to accommodate for the riding style.

The Superquadra engine is actually a revised version of the engine in the 1199, with an altered bore x stroke to create the 899 displacement.

While the 1199 has more expensive magnesium covers the 899 Panigale has been fitted with aluminium which makes things a little heavier. Although it isn’t something anyone will kick up too much of a fuss about.

The clutch is nice and light and it comes fitted with a quick-shifter as standard. This setup is just as good around town as it is out on the track and you will feel spoiled when reverting back to a traditional clutch setup on another bike.

One of the best features of the Ducati 899 Panigale is the noise it makes from the standard exhaust. You are guaranteed to turn heads when riding through town and out on the open roads. It is likely you will be accused of speeding even if you are chilling at 30mph.

The throaty rumble is perfect for the Panigale and acquires it the attention it deserves, however, if you aren’t a fan of strangers paying you attention then this Ducati may not be for you.

When it comes to attention, stylistically the 899 Panigale naturally draws the eye, even from passers by who aren’t into bikes. I would go as far as to say it is one of Ducati’s best designs.

The Panigale silhouette from the 1199 is passed down to the 899.

The white paint scheme with red wheels is the true looker and stands apart from everything else, combine that with the noise the bike makes and what you have is the ultimate machine for posing.

5kg of weight has been lost compared to the 848 thanks to the new frame predominantly. Handling is widely praised for being accurate and light, which is always good news on a sportbike.

The engine is positioned in such a way that the weight distribution is balanced to that renowned Ducati excellence.

The 899 Panigale has a shorter wheelbase compared to the 1199 which is down to the different rear swingarm between the two. This aids with the 899 being more suitable for road use over and above the bigger bike.

The suspension system offers a great ride that is adjustable and it will work well both on the road and the track, as well as in the wet and dry.

There is no way around the fact that the 899 Panigale has sporty ergonomics and you are shifted forward over the tank, with your feet back; putting you into a track-orientated riding position.

Only hardcore riders will want to use the bike as a sports tourer and I expect these are very far and few between.

Although the Ducati 899 Panigale is more comfortable and manageable than the 1199 it still isn’t a bike you will want to spend long days in the saddle on.

Although some highway miles will be fairly comfortable thanks to the fairing and screen which keeps you well protected.

The mirrors are also usable which is rare in these types of bikes as they are more of a mandatory addition rather than thought out for usability.

If you do enjoy track days, the Ducati 899 Panigale is definitely the bike for you though and you will be very happy testing your limits and skills with one of these.

Another little side note is that the 899’s V-twin engine gets very hot, so be prepared to overheat in the Summer if you plan on riding around town regularly.

Brembo brakes are employed for stopping power, with ABS and traction control thrown in for good measure to keep you upright. I have found absolutely no complaints about the braking system and all riders seem to be perfectly happy with the setup.

In terms of rider aids the bike is loaded with the LCD screen being the central control hub.

“The more important thing about the electronics package other than outright performance enhancement is that, like the ABS, they give you confidence when conditions are less than perfect.” Bennetts

After a year of testing the Ducati superbike, personalising it along the way and it becoming the staff’s favourite bike, “the 899 Panigale was named MCN’s Middleweight Sportsbike of the Year.” MCN

Cycle World ran a comprehensive test of the 899 Panigale against the 1199 and on reflection they claim the 899 “in comprehensive evaluation, might just be the best Ducati engine ever”

On comparing the Ducati against middleweights from MV Agusta and Suzuki at a track day they write “the Ducati felt just right. Power delivery, handling, fueling, and great traction control all are very precise. The Ducati was refined and fast, boosting confidence and making it the easiest of the three to ride on the track”

There wasn’t one review I read from the press or current owners that had many negative things to say about the 899 Panigale. It is rare for me to review a bike that is spoken of and held in such high esteem, there is usually something that lets the side down.

The only minor moans I picked up on were:

Is the Ducati Panigale 899 considered a good bike?

The 899 Panigale is widely thought of as one of the best Ducati’s and further to that, bikes of its class that has ever been produced.

It is considered as a bike for everyday people to enjoy on the street even if they never take it to a track.

Although, where it excels is most definitely on the track, and for the average rider you will get far from enjoyment out of blasting this around than the bigger and more intimidating 1199 Panigale.

Style, reliability, performance, noise, handling all add up to make the 899 Panigale a brilliant feat of engineering from Ducati.

Cycle World pitched the Ducati 899 Panigale against its bigger sibling the 1199 and in their test the top speed of the 899 reached 161mph.

Having read through several forums and owners groups, many riders have claimed to hit 170mph, with some claiming the absolute max at which the bike tops out being 180mph.

Rumors are rife that the 899 has done 0-60 in 2.5 seconds but I cannot find any reliable sources to validate this.

On Autotrader there is a really special Carbon 899 Panigale advertised for sale for £25,980.

Yes, it is more expensive than when the model was first released but you only need to check the work that has been carried out by Ducati racing specialists to appreciate its value. Essentially everything that was possible has been upgraded to Carbon Fibre components.

Cycletrader has a great example advertised for $9,000 with under 7,500 miles.

Is the Ducati Panigale 899 likely to be a future Italian classic?

The 899 Panigale has a brilliant reputation for performance and reliability. On top of this it was developed to be more usable for street riding not just track.

As a result many Ducati fans choose the 899 Panigale over and above the flagship 1199.

The fact that the bikes 5 years on from the last year of production have held their value so well suggests that they will continue to depreciate very slowly.

I would be surprised if the Panigale 899 isn’t a collectible Ducati in 10 or so years.

As of right now if you can get your hands on a Ducati 899 Panigale at the lower end of the price range. You will be getting a Ducati superbike that is considered the best bike in its class of all time, ready for whatever you and the road can throw at it. Also, you will be making a financial investment that will likely see a return down the line.

Huge fan of the Ducati Panigale 899, it was a design executed to perfection. The 899 wasn’t just a cheaper, smaller version of the 1199; it was an awesome machine in its own right, that could go toe to toe with anything that anyone put before it.

I am curious to see how the bike is remembered in the history books and whether one day it will be a worthy Ducati Superbike for a museum piece. 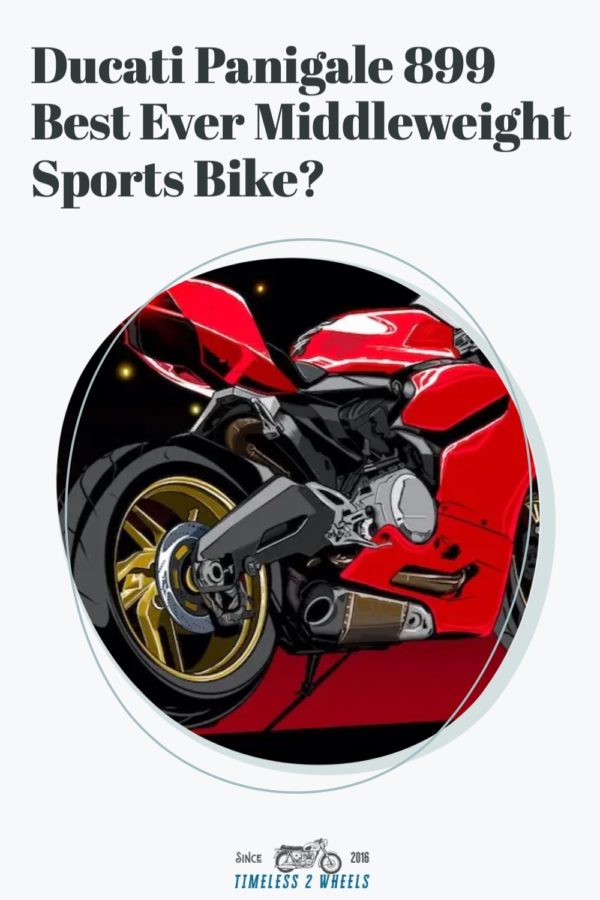