The Yamaha RD250LC is considered to be an absolute hooligan machine and its reputation particularly in the UK in the 80’s is partly why it had such a short lifespan.

It was released in 1980, an extension of the earlier RD250 and it was very quickly deemed a two-stroke icon; it is highly collectable today.

It was the ultimate amateur racers motorcycle, it spawned many local legends and well-known professional racing heroes.

In the US it was known as the RZ250LC, although the whole RD line wasn’t really aimed at the US audience as emissions laws were tightening and were making two-strokes effectively obsolete.

The LC remained in production until 1987 although it was no longer produced for the UK market after 1983.

The UK laws changed in 1983 and it restricted learners to 125cc, which essentially killed the 250cc market in Britain.

In 1984 the Yamaha RD500LC was introduced as a follow up to cash in on the reputation forged by the 250.

Design had begun first on the RD350LC and it was in production although delays meant that it actually launched after its smaller sibling the RD250LC.

The RD250LC arrived earlier in the year in 1980, first hitting the streets of Britain followed by Japan shortly after, and it is safe to say it took the younger motorcycle population by storm.

It was the fastest two stroke you could get your hands on and it’s presence encouraged riders to test their limits and give racing (legal or otherwise a go).

The 250 had been built specifically for the L plate law in the UK, it was to cater to new riders that were restricted to a 250cc motorcycle, although Yamaha went out of their way to push the boundaries of what these restrictions meant.

The fact was the 250LC had 35 horsepower as opposed to the 47 horsepower of the 350, but the top speed was nearly identical with the 350 claiming close to 110mph and the 250 nudging the needle past the ton up marker.

Basically the RD250LC was fast, faster than any learner legal motorcycle probably should have been.

The two bikes were identical with the only exceptions being that the 250 had a single not dual front disc, a different rear wheel and smaller brake master cylinder and obviously the max power output being slightly lower.

Yamaha threw all their race knowledge and technology into the RD (Race Developed) line and the 250LC was no different. The RD250LC was based on the TZ250 (the GP racing machine) and at the time of release was considered a Supersport.

The RD250LC was ahead in terms of performance on the earlier RD250, notably the LC was water-cooled as opposed to the air-cooled bikes that came before.

The engine was quite easy to tune to go even faster than stock, and this can make it quite difficult to find a non-molested LC today.

7,000rpm is where the bike comes into its own, the power band kicks in and the engine becomes smooth and comfortable. There is a definite lack of mid-range acceleration, but this means it will behave around town sticking to the speed limits.

This outlaw bike wasn’t built for that though, get it out on long winding roads and explore the power that comes when you are over the hump.

A double cradle chassis holds everything in place and this is paired with Monocross suspension and lightweight cast wheels.

The suspension was upgraded over the RD250 with a new monoshock setup, it is firm enough to keep you stable over bumpy surfaces at speed, but you also won’t throw your back out if you hit something a little too hard.

The bike is incredibly lightweight and is built to be thrown around, handling is precise, nimble, it is flickable and so much fun. The RD250LC wasn’t built for long distances but short blasts that put a smile on your face.

Ergonomically the riding position is more upright and comfortable than the GP bikes but you are still pushed forward and hunched over somewhat, higher bars can alleviate some of this pressure however.

Brakes were adequate, although arguably two discs upfront wouldn’t have done any harm especially given the 350 was given them.

In 1981 it received new cylinders, and new carbs among other bits.

In 1983 it was again revived with many components upgraded and swapped out to improve performance.

This was also the year that the UK changed the law regarding learners restricting them to 125cc bikes. It didn’t stop Yamaha producing the RD250LC for other lucrative markets.

In fact Yamaha continued to improve the bikes performance with better components right up until its last year of production.

The RD250LC was instrumental when the Pro-Am series in the 80’s was formed. The competition races gave amateur riders a chance to win some big prize money and compete against established professional racers.

The Pro-Am series went a long way into establishing the RD250LC as the ultimate wannabe racers weapon.

Such a legacy the RD250LC and Pro-Am series left that recently at Silverstone teams regrouped with restored models to race them once more.

Using this bike for a commute (albeit quite unlikely today) would be a mistake and challenging, slow-moving traffic will have you tearing your hair out as the bike struggles to move through the low gears to get to a reasonable speed.

Long distance riding is out of the question, unless of course you do some modifications to the bike, although again it’s unlikely owners today will be planning a tour on one of these.

MCN wrote of the RD250LC “When the RD250LC went on sale in 1980, it was obvious even then that the liquid-cooled, TZ-inspired heir to the quarter-litre class throne was going to be an instant classic.”

In conclusion to having tested an original model against other two-strokes from Suzuki and Kawasaki of the same era they say something which I think sums up the RD250LC pretty perfectly:

“There’s something special about riding a 250 stroker from what was arguably the golden age of the genre. Maybe it’s a nostalgia thing, maybe it’s about turning the clock back. But whatever it is, it’s a real blast.

The RD250 LC is light, uncomplicated, fast(ish) and easy to sling about – all virtues I can highly recommend in a bike. And it brings a great big, silly grin to your face – guaranteed.”

In the UK you can expect to pay from £4,000 upto £9,000 for a good condition example it is not uncommon to see the prices exceed this.

If you are paying the top end of this price range you need to ensure that the bike is original and not made up of RD350 parts and non-original components, as the parts at the time were interchangeable and often swapped around accordingly.

For example this model in Scotland is priced at £5,500 but has the RD350 top end front brakes on it; this may suit some but not those who are looking for originality.

On the other hand this model in Germany is advertised for £5,995 and is in original condition, with lots of miles on it, but has been taken care of.

On occasion you may come across an RD250LC such as this rare gem. A brand new, old stock with zero miles on the clock. For a collector, this is a museum worthy piece, the Holy Grail.

The best advice I can offer if you are in the US is to look towards Europe to import. Not many examples found their way into the US at the time nor since and so they don’t come up often on American soil. If they do they are close to $10,000.

I flipping love this machine, it was a rebel, it encouraged new young riders into the fold and inspired many to pursue their love of racing.

It wasn’t the prettiest bike in my opinion but it was undeniably one of the motorcycles of the 80s.

There are not too many bikes in motorcycle history that upon production have rushed through changes in the law. The Yamaha RD250LC was an outlaw, and for that reason it’s in my list of best motorcycles ever made. 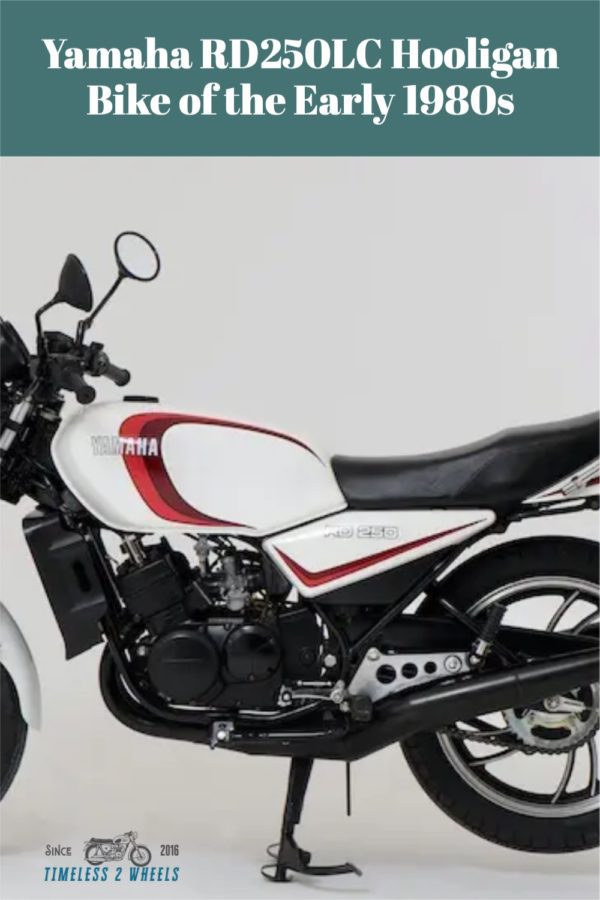