The US market was slowing down and yet there was a gap in the market for off-road motorcycles which only manufacturers such as Bultaco and Husqvarna were currently supplying specific off-road machines.

To get by off-road owners were modifying lightweight street bikes for off-road use, so there was a definite niche to be filled and Yamaha were armed and ready.

The DT-1 preceded the later Yamaha DT250 and other variations in capacity that would come over the following years. It pretty much created the entire dual-sport category of motorcycles that would boom over the years to come and continue to thrive today.

In 1971 the Yamaha DT 250 was introduced to carry the torch and it was a pretty good follow up from the original Yamaha DT-1.

The DT power plant was a basic 250cc air-cooled two-stroke, single cylinder engine that was ready for dirt roads, it was equally cheap and easy to operate and maintain.

However, for 1972 it was given reed intake instead of piston-port. What this meant is that the reed valves stayed open for as long as there was airflow forcing its way in. It meant that engines could make more power without sacrificing anything from the powerband.

The 246cc engine used an additional two transfer ports along with more holes in the piston skirt. These small details meant that there was an increase in power and a much better throttle response than what had been seen in pre-1972 Yamaha engines.

When you talk about 17Nm of torque or even 20.7Nm of torque that would be seen in later years, it doesn’t seem like all that much these days.

However, in the early ‘70s that amount of torque was enough for both on and off road escapades and the way it was delivered ensured a serious amount of fun was to be had.

It wasn’t considered to be a joke road bike playing at being a genuine off-road Scrambler, the DT 250 was genuinely a great choice for hitting trails. The easy to maintain engine, 5 gears, torque and power band ensured this.

In 1976 for the 1977 model, the Yamaha DT250 like the rest of the DT line was equipped with monoshock rear suspension which changed the game completely. It had trickled down from the success of the Moto-Cross machines competing in the previous years World Championships.

The softer travel and longer spring rates meant the bike was now better utilised on the rough than it had been with the previous models’ twin-shocks. As a side-benefit of the mono-shock the bike was also lighter, with a dual-sport machine this is never a bad thing.

The drum brakes on the front and rear fulfilled their role and provided appropriate stopping power in all the situations that you could find yourself in on the bike.

High bars and foot pegs pulled back a little made for a comfortable ride that put the rider in a confident yet aggressive position in complete control, whether you are pulling away from traffic lights or hitting tree roots on a trail.

Great handling, precise steering, good cornering and high performance on rough roads were all positive aspects of the model that stemmed from the suspension setup mainly mated with the lightweight chassis.

A number of off-road features littered the Yamaha DT250:

The only real cosmetic changes during the model’s run was the shape of the fuel tank and the seat. Other than that stylistically the DT 250 remained a homage to standard ‘70’s motorcycle styling.

Where things went wrong with the Yamaha DT250 was no real fault of its own, but rather it was being put up against motorcycles from Honda and Kawasaki that were simply better performing.

Had Yamaha thrown in enhancements, upped the spec, made modifications to the engine then the model may have shot to the top of its class.

With all that said, today the DT250 is a solid dual purpose machine that will still put a smile on your face and is more affordable than other competitive Scramblers from the era.

If you are planning on riding a Yamaha DT250 today it is worth noting that the wiring and electronics were 6V up until 1982 and so you will need a 12V converter if you want to run more up to date lights etc.

It is said that the bike’s usage should be 70% off road and 30% on road, so the Yamaha DT250 performs much better on the dirt than the road and things like braking do reflect this.

On average in the UK £4,500 will get you a good condition DT250, you will likely be looking at spending a bit more if you want something more original.

This 1972 restored model is a great looking example that has had a lot of work done to get it into running condition and is well worth checking out.

You could expect to pay as little as £1,500 for a model that is in need of work, such as this barn find imported from the US.

This 1972 model in classic green for £4,999 is absolutely stunning and one that is definitely worth looking at if you are in the market for a Yamaha DT250.

This 1973 Yamaha DT250 in California is a great looking example of the little two-stroke trail bike.

Yamaha’s DT lines morphed into a legendary line of bikes and the 250 was a part of that.

I am a big fan of small capacity machines and therefore the 250 is right up my street.

The Yamaha DT250 at all stages of its production was a Scrambler changing the boundaries of what was possible from a factory motorcycle. Taking riders on the street to the trail and then taking them back home again.

Suddenly owners weren’t having to do all that much to modify their bikes for off-road use as there was a perfectly capable machine already being shipped from the factory.

The Yamaha DT-1 may be the most popular and first rendition of the DT series and therefore its value is somewhat higher, but if you are looking at dipping your toe in the buy to ride classic bike pool, the later Yamaha DT250 is a solid choice and an evolution of that model.

70s motorcycles were a much simpler affair than todays offerings. Couple that with bang on ‘retro Scrambler’ styling, cheap parts and an easy to work on engine and the Yamaha DT250 makes an ideal first shed project. 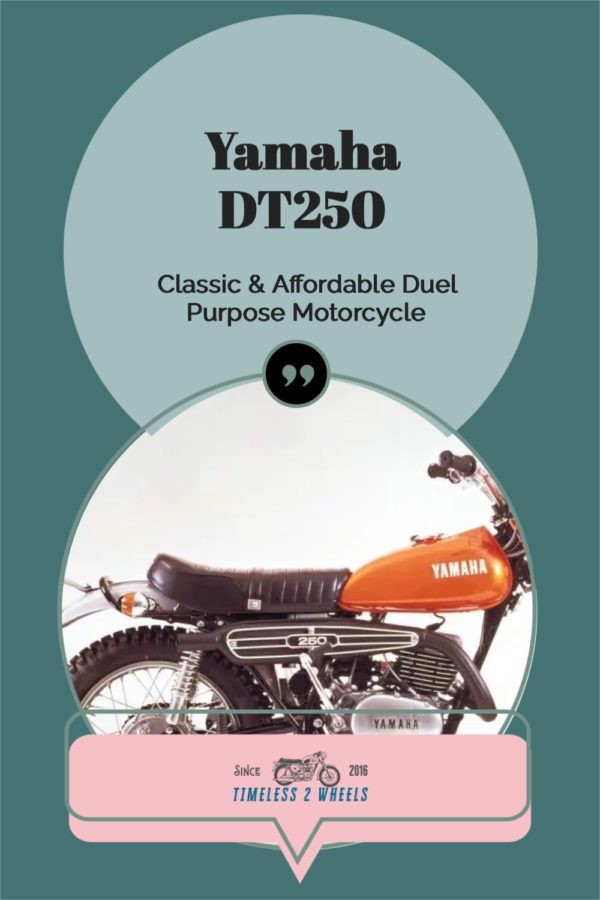