Yamaha produced their first 247cc two-stroke in 1957, the YD1. Following a series of YDS piston port machines it was December 1972 when the first Yamaha RD250 was released.

Little did anyone know what a game changer the quarter litre 30hp parallel twin would be, well maybe Yamaha knew.

Just before the Yamaha RD250 in 1970 there was the R5, it was the slimmest and fastest of Yamaha’s two-strokes to date, offering performance along with styling to match.

The main advantage and selling point was that it was capable of performing like more expensive supersport machines but at a more affordable price point.

The all new Yamaha RD250 was intended to capitalize in the same way. It would also take styling cues and other features from the preceding YDS7.

It was the first production road motorcycle to use reed valves and this system greatly improved the mid-range with no compromise to overall performance.

It wouldn’t be long before other Japanese marques would adopt their own version of Yamaha’s reed valves, but in 1972 they were the first and way ahead of the game.

With a weight around 152 kg dry with 30 horsepower, the Yamaha RD250 was a young rider’s dream, built for fun and bags of it at that.

The RD250 parallel twin engine had a narrow powerband, a need to keep the revs sky high, and a narrow chassis to cling on to, the RD 250 demanded the riders attention.

Was it a road bike? Yes, could it take on a trackday? Without question, and it handled as such.

It would live on through the 70’s and into the 80’s in the guise of the RD250LC which was an upgraded liquid-cooled version. Along with the RD350LC version the liquid cooled motorcycles would become two of the most iconic bikes of the 80’s.

The Yamaha RD250 would see 6 variations from model A through to F, before evolution created the RD250LC.

The first RD250 motorcycles came with a twin shoe drum front brake like the YDS7 prior. (This excluded the European models which came already fitted with a twin-piston caliper front disc brake.)

They were also equipped with a five-speed gearbox, although the box actually contained six sets of cogs but with the sixth gear blocked by a stopper in the selector mechanism.

It was possible to modify the gearbox to access the hidden sixth, but it wasn’t easy.

In 1975, the RD250 had its cylinder heads revised and the gear ratios alongside them.

In 1976 it received its most significant overhaul so far with a major styling update. The RD 250 now had the iconic ‘coffin-style’ tank and racing stripe paint schemes.

By 1979 the last of the air-cooled RD’s was released and it featured cast wheels and an electronic ignition. It also had a lower top speed than the earlier models, it was down to around 88mph.

Throughout the life of the RD250 it is said that they were capable of close to 100mph.

Based on my experiences racing against RD250’s on my Kawasaki KH250, The RD250 B was the fastest until the all conquering RD250LC was released.

RD stood for Race Developed and the name was a nod to the design and engineering Yamaha had taken from their race programme and inserted into their new quarter litre road bike.

Prices vary for an RD250 starting at around £2,500 and as much as £8,000 in the UK. It all depends on the variation and condition. You can pick up an example in need of restoration at the lower end of the scale or an immaculate one at the top end.

Car and Classic have an RD250A advertised for £4,200, it looks to be in excellent condition and is ready to ride with no work needed.

SmartCycleGuide is showing this 1985 model in Washington for $3,000. Other than a new battery the bike wants for nothing and is said to be in collector quality.

Restoring an RD250 is quite a good project to take on, with bikes available to be found at reasonable prices for projects. Parts are also quite easy to get hold of.

The RD series of motorcycles have an on-going cult following with many websites and facebook pages dedicated to the bikes.

Whether you are looking to do a complete original restoration or use replica parts you should be able to find all you need with relative ease.

Fowlers Parts offers a good selection of Yamaha RD250 parts, further to which they have useful technical drawings of components that you can refer to.

Pitstop Motorcycles is also another good source for parts in the UK.

eBay is the best start point in the US.

Here are a few examples of prices for RD250 parts from both US and UK options:

In terms of prices for what you can get for a restored RD250, that will depend on the use of OEM parts versus replica parts and how well the restoration is.

It is unlikely that when you have bought your necessary parts and add in labour that there is much money to be made by restoring an RD250.

You should do it for the love of the bike, get it back to being rideable and ride the hell out of it. That’s what they were built for.

Is The RD250 a good investment?

An original, unmolested Yamaha RD 250 is sure to be a sound investment.

Prices are unlikely to shoot up exponentially, but they are crawling up slowly and they will not decrease at any time in the foreseeable.

If you are planning to purchase an RD250 as an investment make sure to go for the A or C bike as they are the most collectable, thanks to the former being the original and latter being the first of the coveted bodywork.

While there are many that would much rather opt for the later RD250LC, the original air-cooled RD250 is a brilliant option for those looking for a piece of two-stroke history.

Yes, they are significantly bigger and as a result outclass young new riders, which is not a bad thing. What they do though is spark the same unashamedly rebellious youth in a rider.

Today, the MT range is the Yamaha for the hooligans, the one riders turn to for stripped back, raw, race everywhere vibes and pop a wheelie on the way (with countless electronic aids).

However, the Yamaha RD series was the original bike to instill this very same mindset and behaviour in riders. Those that had an RD250 as their first bike, will be quite at home on a modern MT.

I’d happily add a Yamaha RD250 to my garage and I would ride the wheels off it too. 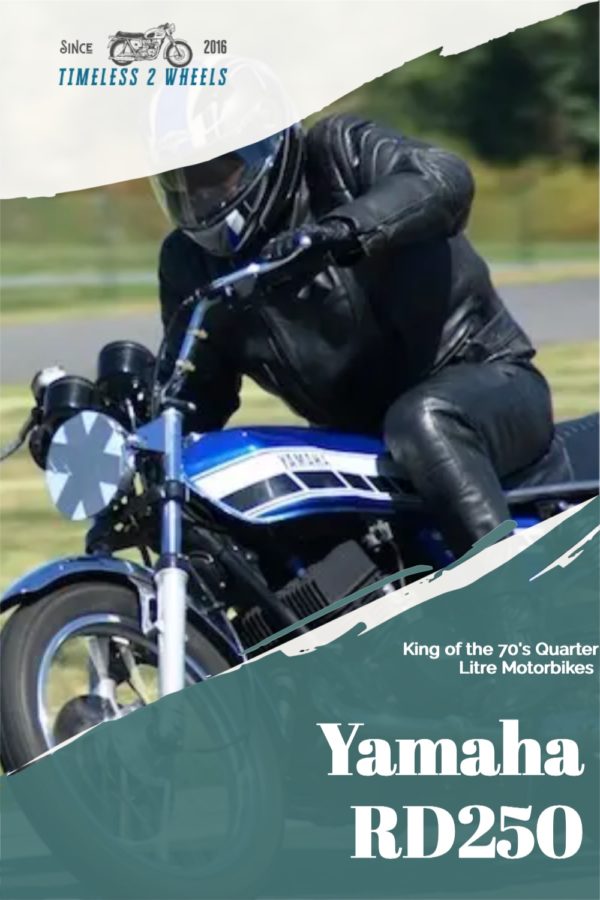