It was while researching a recent article as to why you shouldn’t wear Doc Martens as motorcycle boots that I came across the Stylmartin Rocket boots.

Stylmartin market the Rocket boot as being Cafe Racer vintage style boots and the first thing that struck me about them was that they were one of the first pair I had come across that actually did look like the original Cafe Racer boots worn by the bikers of 1950’s London.

So many retro biker gear manufacturers have simply stuck a ‘Cafe Racer’ label on their boots, jackets, helmets and gloves to jump on the bandwagon.

Stylmartin to their credit have actually looked at what those crazy kids wore and designed a vintage style motorcycle boot but with modern safety features and performance.

Anyway, I liked the look of them so much I ordered a pair and after having put them through their paces for a few weeks I figured it was time I put together a review for you.

What are Cafe Racer Boots?

The first Ton Up Boys were heavily influenced by Marlon Brando’s character from the movie ‘The Wild One.’ Blue jeans, military boots and a leather jacket was the must have look for a night at the Ace Cafe on London’s Circular Road.

WWII was still fresh in the memory and surplus military gear was readily available in Britain. The boots worn by the heroes of the RAF were the favoured choice thanks to their warm sheepskin liner and Englands crap weather.

The second option was a decent pair of Army boots while the third and cheapest option, for those who wanted to spend as much of their wages as possible on their bike, was to simply wear work boots.

Stylmartin have hit the mark with the Rocket boots. By using vintage military boots as inspiration they have captured the essence of the original Cafe Racer boots.

Features at a Glance 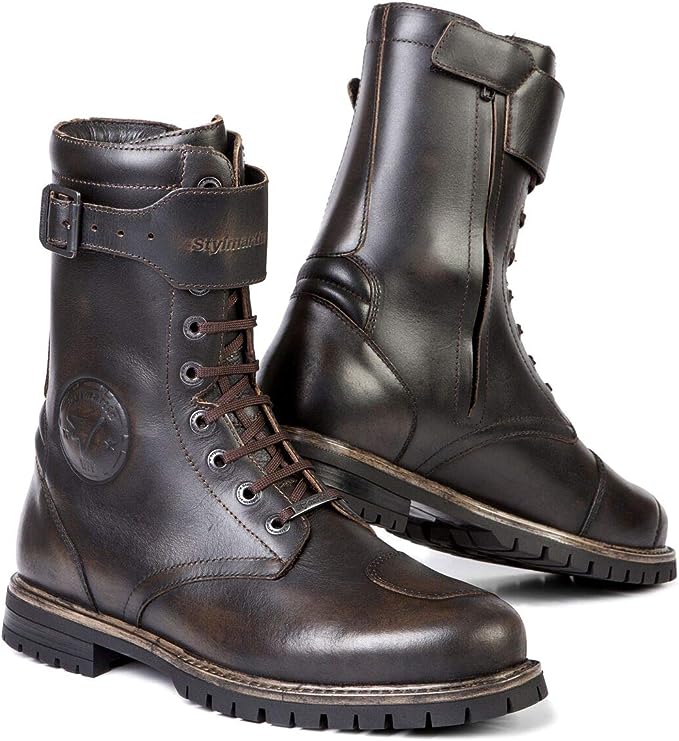 Check both links for stock availability and a price comparison.

Check Amazon Check SBS
I may earn a commission if you make a purchase, at no additional cost to you.

The upper material is what’s called full grain writer leather which I confess was a new one on me and I hadn’t even noticed the subtle colour changes in the images when first came across them. I guess the online photos didn’t do them justice though because in the flesh, the leather looks and feels stunning.

They look well worn yet new at the same time which I am aware, sounds bonkers. Not that fake used look you get with most retro produced gear though, these look genuinely older and I suspect they’ll look even better by the end of this riding season.

I’ve tried to capture the subtle colour differences in the photos for you but it’s hard without flooding them with light and then it’s not noticeable. You can see it best on the photos taken outside such as this one.

I have a pair of Meindl German military issue mountain boots and I didn’t think it was possible to find such comfortable boots offering that level of protection and support but the Stylmartin Rocket boots matches them on both counts.

When I first put them on I thought they were going to be a bit of a nightmare to break in but after wearing them all day around the house they were absolutely fine.

I’ve loved my TCX Street Ace boots shown above and dreaded the day I had to replace them but really there’s no comparison regarding protection, just by looking at them you can tell the Stylmartin boots win hands down.

I guess there’s more of the Stylmartin so its no surprise. What was a surprise is that the Stylmartins are just as comfortable as my Street Ace’s. Now, I don’t know if that will hold true come the hot weather, especially when parked up and on foot but I definitely expected to compromise on comfort so it’s an added bonus that so far I haven’t.

You know when you first get a new pair of motorcycle boots and you try them on and you’re walking around the house all pleased with your purchase and then you suddenly think “I wonder if they really are waterproof?”

No such doubts with the Rocket boots. I have yet to be caught in the rain with them but I would be absolutely amazed if my feet got wet in anything but a long ride in a proper downpour. Even then it wouldn’t surprise me if they remained dry.

That black waterproof gusset you can see in the photo above? Should any water get past the zip it stops it getting into the boot. There’s also one stitched into the tongue behind the laces but it doesn’t go all the way to the top like the one behind the zip. However, the tongue and lace keeper strap is very wide so I don’t see it being a problem.

Getting Them On and Off

So what you want to do is put the boots on and then do up the laces and tie them. Then, undo the zip and try to get them off without undoing the laces. If its a struggle to get them off, loosen off the laces a little and then try again. If they come off too easy then tighten the laces slightly.

Once you find the sweet spot and you can get them off with the zip down but laces tied, double knot the laces and tuck them behind the tongue out of the way.

Apart from occasionally tightening them when they’ve stretched, the only other time I would see a need to adjust the laces is if I was heading off motorcycle touring or was planning on winter riding. Other than that, I shouldn’t have to bother with them.

As well as having the look, the Rocket boots also feel very much like military footwear when you are wearing them. As soon as you pull them on you can tell your foot is extremely well protected.

You can stand on the toe and it doesn’t cave in. The back of the heel feels solid and you can’t bend the sole backward.

They are a high boot and once you get the laces set up right you feel full confidence in them.

The sales pitch says the Rocket boot has internal PU malleolus protection which in plain English I believe means there’s a hard piece of PU over each ankle joint hidden in the lining which protects the knobbly bit of your ankle bone against impact.

Are Stylmartin Rocket Boots Worth It?

These boots aren’t cheap but they ooze quality and once you physically get your hands on them you know you got yourself a bargain.

Attention to detail such as the metal logo on the bottom lace, the fully adjustable leg strap that’s got a velcro fastener over the zip to keep the rain out and the other side is the branded buckle, the additional padding around the top to prevent them digging into your chins, all these point to a high quality product. It’s the gorgeous full grain leather though that sets them apart from other motorcycle boots.

These are premium quality boots and are definitely worth the asking price. I suspect they will be replaced soon as prices have been all over the place on Amazon so if you want them don’t leave it too long before pulling the trigger.

Check both links for stock availability and a price comparison.

Check Amazon Check SBS
I may earn a commission if you make a purchase, at no additional cost to you.