The Moto Guzzi 850 Le Mans caught the world’s attention when released in 1976 and it has continued to captivate ever since, developing an adoring audience that keeps the motorcycle relevant and has turned it into a designated classic motorcycle from the 70’s.

It is well worth both writing and reading about so let’s get started with a quick look at where it all began.

1969 was the year of the Honda CB750 the claimed ‘World’s First Superbike’ and what seemed to follow was every manufacturer of motorcycles suddenly rushing to get out their 750 Superbikes.

It may be crazy today to think that a bike in the 750 class was deemed a Superbike when you have machines like the Kawasaki H2, but back in the early 70’s machines with a 750 capacity engine were top dogs. Suzuki, Triumph, Norton, Ducati, MV Agusta, Moto Guzzi, BMW and undoubtedly some others had a 750 bike out in production by 1972.

It is safe to say that this was the start of the speed races between brands and if a 750 was possible why would you stop there, the next logical step would be to pump up the engine and get to an 850, which is what the likes of Norton, Ducati and BMW soon did.

It was the late 60’s when Moto Guzzi released their V7 range of bikes which had 90° V twin engines mounted with the crankshaft running longitudinally along the bikes axis. The layout of the engine meant it was easy for the bikes to be equipped with a shaft drive which made them incredibly popular.

The engine used for the Le Mans was derived from the V7 range which had increased in capacity for the 850T model. A four-stroke, 90° V twin, longitudinally mounted, OHV pushrod, 2 Valves per cylinder, air cooled 844 cc engine. However, it was upgraded for the new model with high compression pistons, larger valves, a new camshaft and different Dell’Orto Carbs.

The motor was pretty beastly and pushed out 80 horsepower, 79Nm of torque and a top speed of 126mph. Superbike status worthy for the Mid-70’s.

Stopping power was in the form of twin drilled iron discs upfront with Brembo calipers and one disc on the rear which was linked via the brake pedal to one on the front. The linked system would take riders some getting used too but it was a system that wouldn’t fail and in any condition would stop the motorcycle in its tracks.

With 75% of the braking power up front and 25% on the back applied by the pedal brake, the bar lever controlled only one front disc; once used to the braking system some riders said that you could go without the lever at all and reserve it just for emergencies.

The bike was made to look very in keeping with the times with the rearset pegs, clip on bars, humpback seat and funky front fairing. Very cafe racer like both in styling and seating position, while the rider may be hunched over and forward any pillion would likely find themselves bolt upright feeling the force of the wind.

It was also built super low to the ground with a seat height of just 30”. The centre of gravity was kept low and balanced by the engine and transmission being mounted in a large duplex frame with the sump hanging low down between the two bottom tubes. With a wet weight of 232 kg having the centre of gravity nice and low kept the weight manageable.

Overall the 1st Generation Le Mans was a brutal machine which took no hostages design wise and was equipped with not only a bulletproof engine but a revolutionary braking system to go with it.

The Moto Guzzi Guzzi Le Mans Mk1 was sold between 1976 and 1978, the total production number during this time was 6,817. At the time the bike was priced at $3,679 which converts to around $16,342 in today’s money. It is safe to say these bikes weren’t built to be bought by everyone and even today Moto Guzzi maintains that elitist stance when compared to other manufacturers.

Kind of makes you want one even more though right?

The later released Le Mans II (Europe-only model) simply upped the bodywork coverage, had a bigger fairing and different instruments. The 850 Le Mans III was produced in 1981 and ran until 1984 when the model was replaced with the bigger and badder Le Mans 1000.

Ian Falloon for InfoMoto Australia writes “The Moto Guzzi 850 Le Mans may have suffered from marginal execution and indifferent quality, but more than any other motorcycle it epitomizes the mid to late 1970s café racer style. And unlike some other deliberately styled motorcycles the Le Mans has stood the test of time.”

The fact is, at a time when the BMW R90s led the way for Cafe Racer styling and Ducati were dominating top speeds while the UJM’s were flooding the market; Moto Guzzi managed to create a motorcycle that stands the test of time to date.

The history of the cafe racer scene has been extended and it pulls naturally on the Le Mans as the perfect starting point, and the end result is a custom bike that breaks tradition from the British Triumph and Norton Cafe Racers we are so used to seeing.

Car and Classic are currently advertising Le Mans Mk1 for £16,500 or just over $22,000. The bike has only had 2 owners from new and is immaculate with all original components and paperwork to back everything up.

Prices in the UK vary from £6,000-£17,000, prices are mainly condition dependent and how much of the bike is original.

It is unusual to see such a range of prices on classic motorcycles such as this, so it is really important to do your research into the Le Mans so you know you are getting a bike worth its asking price.

Sump Magazine writes “Many people talk of Moto Guzzi engines as being simple and agricultural. Crude even. And in many ways, so they are. But they’re also well-thought-out pieces of very practical engineering. You need very few special tools. They’re ideal for the home mechanic. There are no great mechanical mysteries within. And there are no end of upgrades.”

It isn’t just the engines that are easy to work on but they are the most important part of any bike project, so it is reassuring to know that despite the mystique of a Le Mans they aren’t all that complicated to work on.

The main thing to know with a restoration Le Mans project is that parts are not cheap and the market isn’t flooded with them either, so they may be more difficult to get hold of compared to other classic bikes.

Some examples of prices are as follows from eBay:

The 850 Le Mans has a cult following and has steadily increased in popularity in recent years thanks to the cafe racer revival taking it on as an icon of the genre.

I do think that the value is really at its peak and it won’t increase much more than where the top end prices are at now. However, if you can pick up a bike at the right price you will likely be able to sell it on at a profit in a few years.

For those doing a restoration back to original spec it is likely you will see a good return if you buy your donor bike at the right price, but please note that an original spec bike that is in collectors condition without restoration will always fetch a higher price than any restored motorcycle.

It’s safe to say that I’m not the biggest Moto Guzzi fan in the world, I just never got on that bandwagon, BUT (and it is a big but) I like the Le Mans. It holds a certain prestige about it, I might not want to own one but I for sure respect the model and appreciate riders when I see one at a classic show or bike night.

The 850 Le Mans stood out in a time of Japanese domination and it dared to be different; anyone who has read any of my previous articles, you will know that I do love an underdog and a rebel and the Le Mans is just that. Only this particular motorcycle started off as an underdog and became the epitome of the 70’s Cafe Racer scene. 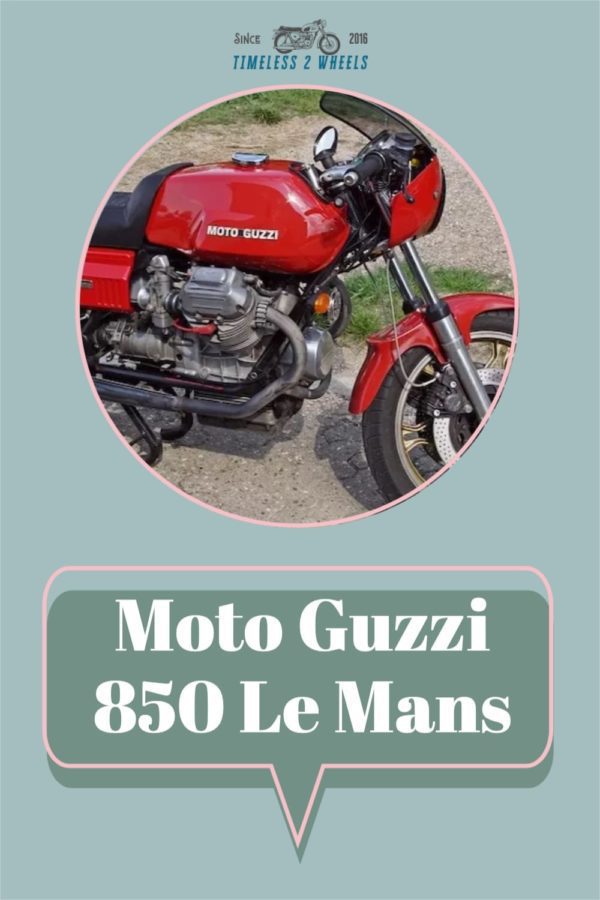