I’m hoping to get some miles racked up this spring/summer with a ride up the west coast of Scotland. As the Bobber is a bit of a nightmare with the short rear fender on when it’s raining I decided it would be best to put the original rear fender back on but with a new tail tidy.

I purchased the Triumph Bobber as soon as it was released so changing the back end at that time meant my only option was the official Triumph short fender, side number plate holder and large horrific multifunction signals – all of which I had fitted before I took delivery.

Nearly 3 years on and there’s now several rear end options for the Bobber and after first ordering the British Legends tail tidy, I had a change of heart once it arrived and went for the BAAK license plate holder.

Why Am I Putting The Original Mudguard Back On?

Whilst the short fender may look better than the original it isn’t very practical when you live in the British Isles due to the “occasional” rain.

The back wheel throws the water off the road up your back which then runs down your jacket and pools in the seat meaning your ass is quickly soaked.

Living on the Isle of Man means I’m only 20 minutes from home so I’m happy to live with the risk of the odd soaking. Having to ride for 3 hours to catch the ferry to the Isle of Harris with water spraying up my back though, does not appeal.

Having the longer fender on will also increase my luggage options when touring.

Why The BAAK Tail Tidy?

BAAK are a French custom motorcycle workshop specialising in creating custom parts that are plug and play.

You can purchase just the license plate holder and use your own or the original indicators. Alternatively, you have the option of a pair of standard signals for an additional 15 Euros or for another $100 they’ll include a pair of LED mini signals.

I went with the latter and they are definitely worth the money.

They are very neat and tidy and barely noticeable until they are on. They sell these separately for $65 a pair. The reason they are $100 if ordered with the number plate holder is that they put bullet connectors on the end and include adaptors so they can then plug directly into your Triumph Bobber wiring harness.

Because I was changing the short fender which has its own wiring loom I had to drop the wheel out to get to all the bolts and feed the wiring through.

If you are fitting the BAAK license plate holder to the original fender you can get away with just lowering the wheel a couple of inches.

Once the back end is up on your paddock stand put some timber under the back wheel leaving a 2 or 3 inch drop.

Slacken off the adjusters and take the axle out far enough for the wheel to drop onto the wood put not so far that the calliper comes off. Leave the axle in enough to keep the calliper in place.

The disc should still be between the pads. I find this makes putting the wheel back on a lot easier when on your own.

You should now have enough room to get a Torx L key under the fender to undo the 3 screws holding the original lights and license plate unit. There should be enough slack on the wiring for you to pull it through once the 3 screws are out to get to each connector.

As easy as it gets. The back light has the correct connector as shown below so you just plug it in. The new back light has a license plate light built in so you are only using the one connector.

Because you now don’t need a separate license plate light you will have a spare 2 wire connector in your wiring loom which you can blank off or wrap in tape to keep moisture out.

Connect the turn signals and then hide the wiring as best you can. There is a small hollow section within the fender either side of the entrance hole for the wiring loom. I found it a struggle to hide all the wiring inside so cut down the indicator wires and then put new bullet connectors on.

Once the wiring is sorted you can bolt on the license plate holder. There’s no drilling as it uses existing holes and it’s completely reversible.

You will need a 10mm and an 8mm socket or spanner for the supplied fixing nuts.

The turn signal brackets are adjustable so you can widen or narrow the distance between the two so they match your particular license plate size.

I’m really happy with how the back end looks. When I first decided to go back to the full size fender my original plan was to keep my Rizoma multi function signals and not have a back light.

I ordered the British Legends tail tidy after forgetting the short fender has a different wiring loom to the original so it wouldn’t be a simple case of changing like for like.

It took me ages to get the Rizoma’s wired up and working correctly when I installed them so decided to order the BAAK and go back to a tail light with regular signals.

I’m now considering selling my side number plate and short rear fender complete with the Rizoma lights already wired up. My original plan was to swap everything back once I was finished touring Scotland but I don’t think I will be now.

Plus, with the full size fender back on, the bike is now a lot more practical.

BAAK ship worldwide via DHL from their base in France. Many of the parts are made to order including the tail tidy but I got a shipped notification 2 days after ordering and it arrived 3 days later.

If you don’t like the idea of butchering your wiring loom or you intend to put the Bobber back to its original condition before selling it on then the BAAK offering in my opinion is your ideal tail tidy solution.

Ancient Hippy has been back in the saddle since 2017, having fallen for the Triumph Bobber. Mounts owned in a previous century include several pre-unit Triumphs including an old school chopper, a Honda CB750 Cafe Racer and an XT500 thumper. Click here for more about Ancient hippy

With my Triumph Bobber not having a centre stand a quality paddock stand is a necessity for cleaning the wheels, chain maintenance, doing an oil change etc. The Premium rear paddock stand...

I purchased a pair of these Gerbing XRS-12 heated gloves the first winter I had the Bobber, actually it was still Autumn. When I purchased the beach bars for my Bobber from the Bike Bros in... 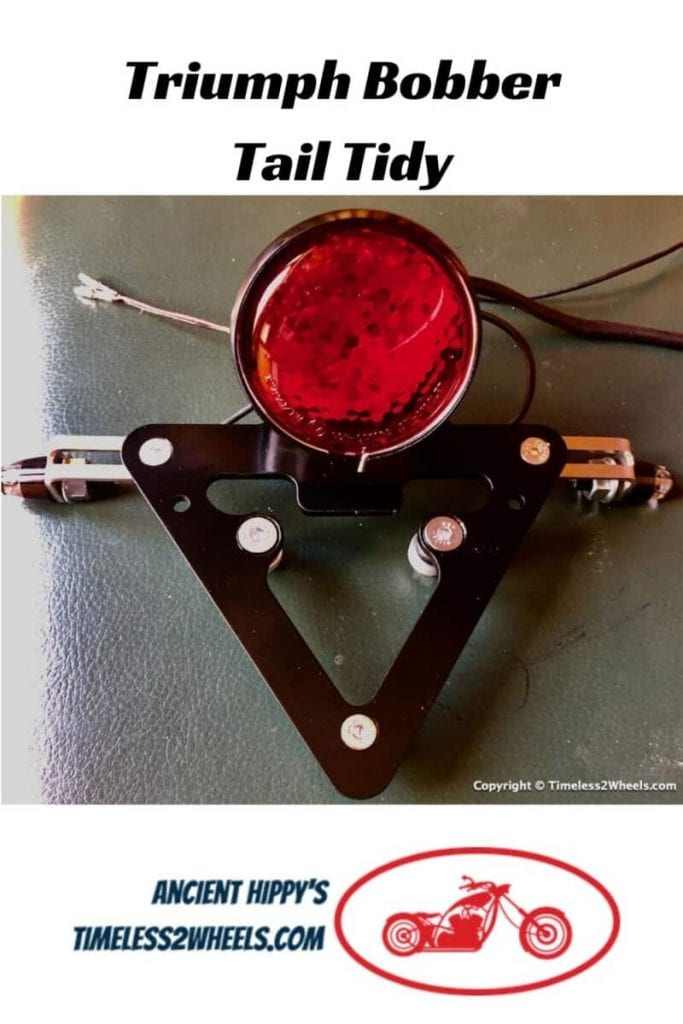